The boy shared a photo of the stab wound to his chest (Picture: MEN Media)

A 16-year-old boy is ‘lucky to be alive’ after he was set upon by a group of strangers and stabbed inside Next at a popular Manchester shopping centre.

The teenager was with his friends when ‘about 20’ lads as well as a girl approached him asking if he was being ‘cheeky’, his dad said.

Things then ‘escalated’ and he was ‘set about’ with the group running through Next security and throwing bottles at him at the Arndale Centre.

The boy, who has not been identified, was then ‘cornered’ in the shop and stabbed.

His dad shared a photograph of the wound to his chest, saying a doctor had said if it had been just a millimetre in a different direction things could have been much worse.

Emergency services were called to the city centre shopping centre on Friday evening, with officers seen guarding a cordon inside the store.

The boy was taken to hospital but has now been discharged, with police saying his injuries are ‘not life changing’.

His dad said the incident started when he was approached by a girl who asked for directions, which he gave. 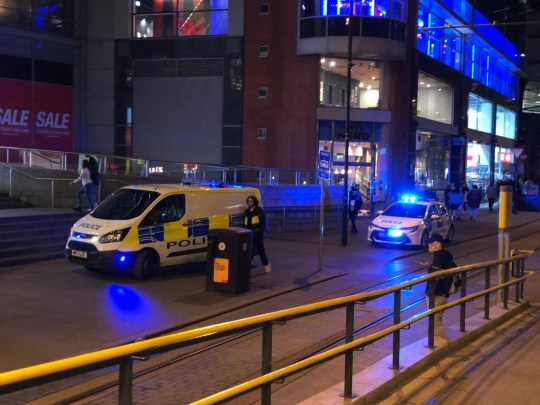 But his father said she then ‘went and brought all these lads over. There were about 20 of them.’

He said his son had not done anything wrong and ‘it all escalated from there’.

‘One of them kicked him in the neck then all hell broke loose.

‘They went into Next and these other lads ran through the security and set about them again, throwing bottles.

‘They cornered them and this lad ran over and stabbed him in the chest.’

The dad said he received a phone call tell him that his son had been stabbed shortly before 7.30pm.

‘It was horrendous,’ he said.

‘That phone call comes and it’s the worst experience of your life.

‘The doctor said a millimetre either way and it would’ve hit an artery and we’d have been having a different conversation.’

Police said ‘a couple of other teenagers also received minor injuries and were taken to hospital but have since been discharged’.

The dad of the 16-year-old said his son has been left ‘shaken’ by what happened.

‘At the moment, I don’t think it’s properly sunk in for him,’ he added.

‘He’s a good kid who was raised well and goes to a good school.

‘These were just random lads and girls looking for trouble by the sounds of it.’

#APPEAL | Did you witness a stabbing in Next in the Arndale yesterday evening at around 7.20pm involving two groups of teenagers?

We’re appealing to anyone who may have information – or video footage – to come forward an assist police with enquiries. pic.twitter.com/zURlJZqJq0

The man says he has been left ‘sickened and saddened’ by the incident and is now afraid to let his son out of his sight.

‘When I was growing up, knock a door run was about as much mischief as we saw,’ he said.

‘You walk past a child in the street and you would not think you’d have to look over your shoulder in case he plunges a knife in you.

‘Something has to be done in schools to portray the message a bit clearer.

‘Someone somewhere is going to lose a child and you have to wake up knowing you have killed someone.’

Images from the scene showed several police vans near the scene as well as an ambulance and CSI van.

There have not yet been any arrests.

Greater Manchester Police described the stabbing as ‘an isolated incident’ and said there was no wider threat to the public.

Inspector Glen Rees said: ‘I fully understand and sympathise with the worry and concern that incidents such as this can cause for the wider public, especially in such a busy area on a Friday evening.

‘I would like to stress that we are treating this as an isolated incident and we do not believe there to be any ongoing wider threat to the general public.

‘Thankfully the young man who was stabbed has not suffered any life changing injuries but violence such as this will not be tolerated and a full investigation is currently underway to establish the full circumstances and identify those involved.

‘Our enquiries are ongoing but I would appeal to anyone who may have witnessed the assault or has any information to come forward and assist us with our investigation. This was a busy part of the city centre so I am confident there will be people out there who can help us identify those responsible.’