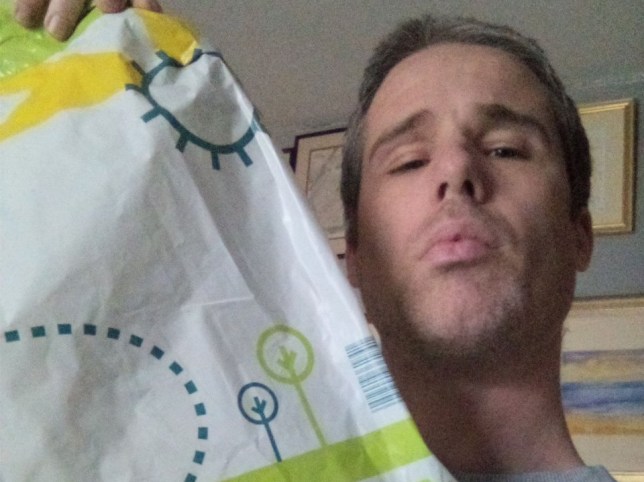 A formerly loyal Asda shopper says he is now boycotting the chain because of the high price of their plastic bags.

Stephen Evans, 37, says he would normally buy six bags for his big weekly shop in Greater Manchester, but the 30p price tag for each carrier bag is now too expensive.

He said if the supermarket ‘want a fight’ about the issue, they’ve ‘found the right one to do it with’, given his history campaigning on knife crime and homelessness.

But Asda have defended the price, saying the bags are not intended to be disposable but should be brought back and reused each shop.

They added that the Bags for Life can be replaced free of charge if they are worn out.

Mr Evans claims however that their ‘disgusting’ price has made him ‘sick with stress’.

‘I’ve been to the doctors, and I got a sick note because I’m just so stressed with it all,’ he said.

‘I said that I’ve had enough, I can’t afford to live as it is.

‘I’ve been signed off for depression now because of this and a few other things going on. But this just made it worse.

‘We get about six bags when we do our shopping, and it all adds up at the end of the month.

‘If I get a big shop from Asda and have to get a taxi home, that’s an added £5. If I’m paying all that for six bags, then it all adds up.’

Mr Evans, from Ashton-Under-Lyne, says he and his family had been loyal Asda shoppers for 15 years until recently.

The charity volunteer said he has now decided to ‘boycott’ the supermarket due to spending around £1.80 a week on the plastic bags – more than £30 a year.

He would now rather get the bus to a different shop, where he claims that the bags are more affordable, instead of going to a supermarket that’s ‘ripping their customers off’ during the cost-of-living crisis.

Asda’s 30p price is matched by rivals Sainsbury’s and Tesco, however Aldi and Lidl are both cheaper at 25p and 20p respectively and Morrisons sells paper bags for just 10p.

Stephen said: ‘If we all stop shopping there, they’ll have to stand up and listen – or they’ll lose their money.

‘If you’re spending that much money on bags, and you’re going every single week, that money could be used to pay gas or electric. I’d rather put it towards electric.’

The shopper took to Twitter and called the supermarket out for their ‘ludicrous’ bag prices, urging struggling families to avoid the superstore.

‘I want them to go back the way they used to be,’ he said. ‘There shouldn’t be a cap on how much you can buy [from the Just Essential range], and the bags should go back down to 20p.’

Charges for carrier bags were introduced to try and encourage people to reuse their bags rather than create more plastic waste.

A spokesperson from Asda explained that the idea isn’t for customers to buy new bags every time they go shopping. The 30p bags are intended as ‘bags for life’ and they will replace any that break free of charge.

However, the cost-of-living activist has made it clear that he will not be setting foot in the supermarket until Asda ‘takes notice’ and adheres to his demands.

Does ITV World Cup pundit Cesc Fabregas still play football and who does he play for?