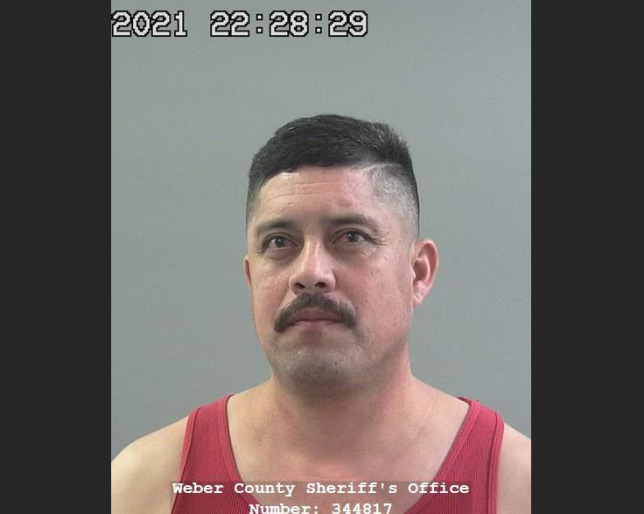 Benjamin Zavala is accused of raping his barber, then victim-blaming her after she fought him off (Picture: Weber County Jail)

A creep raped his barber – then victim-blamed her by saying he had done so because she wasn’t wearing a bra, it is claimed. Benjamin Zavala, 43, allegedly lunged at the woman while she styled his hair in Ogden, Utah on Saturday.

He pulled down the woman’s pants, and molested her with his fingers, while holding onto her wrist, it is alleged. The barber was only able to escape an even worse sexual assault by punching Zavala, and brandishing a pair of scissors at her attacker, she told police.

The shaken woman told police that Zavala had started flirting with her after her colleagues went for lunch, leaving them alone in the salon while she did his hair. She said he began asking her questions about her personal life, and that Zavala paid her compliments about her hair and eyes.

Zavala is said to have assaulted the woman and tried to rape her after paying for his haircut with cash, while she went to give him his change. The woman said he shoved her up against the wall of the salon, and held her by the wrist.

He is said to have made the remark about her not wearing a bra, and also commented on the fact that the woman was divorced while demanding she have sex with him.

After the woman fought Zavala off, he fled the salon on foot. She called police, with Zavala picked-up shortly afterwards.

He is being held without bail in Weber County Jail ahead of his first court appearance.