A 40-YEAR-OLD MAN has died after he was stabbed on a London street in broad daylight.

A trainee doctor battled to save the victim’s life after he was knifed in Willesden Green, north-west London. 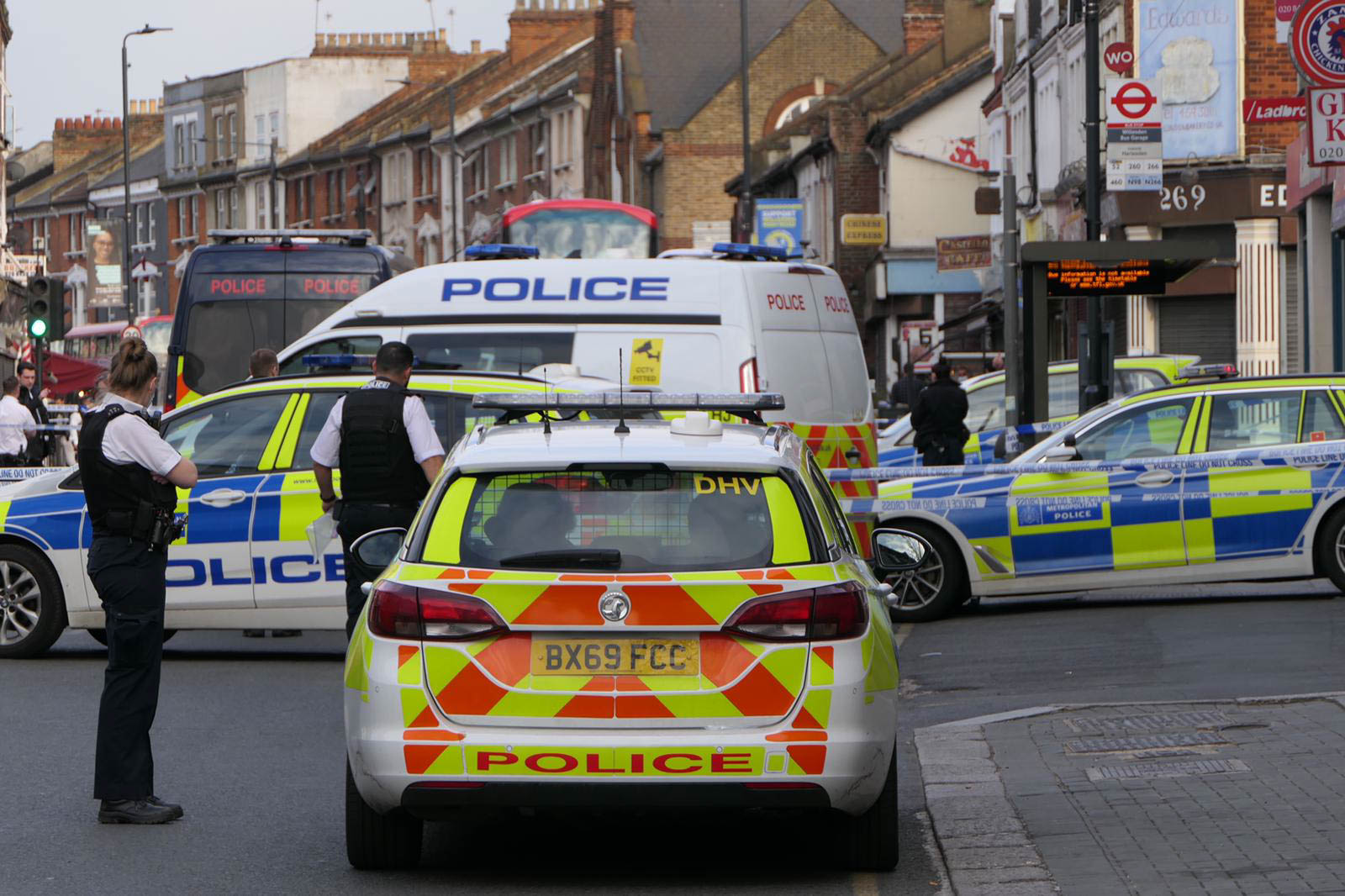 Cops have launched a murder probe after a man, 40, was knifed in broad daylightCredit: UkNewsinPictures 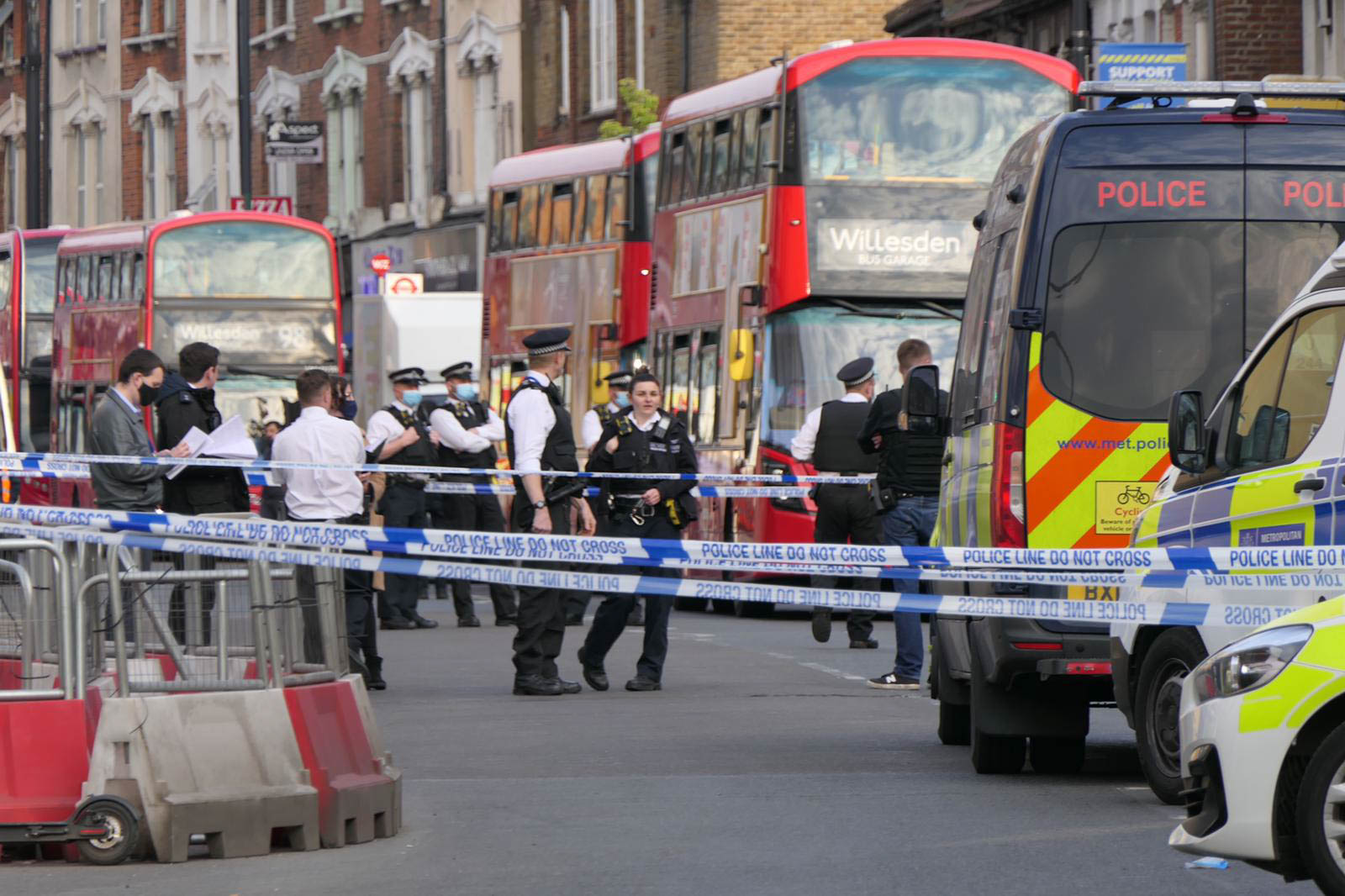 The air ambulance reportedly landed nearby – but despite the efforts of medics, the man died at the sceneCredit: UkNewsinPictures

But despite the efforts of the young female medic, said to be in her 20s, the man died at the scene.

It’s reported that she broke down as he died from his wounds.

A second woman was also seen screaming at the cordon before cops led her away.

Police were called to reports that the man had been grievously injured just after 5.10pm on Thursday.

Officers closed a stretch of road to the public as paramedics tried to resuscitate the man.

After his death, police launched a murder enquiry.

Forensics officers could be seen investigating a stretch of the street close to a bus stop.

A blue tent was also been put up in the middle of the road.

Two buses remained inside the tape and crime scene investigators were seen approaching the vehicles in blue overalls.

An electric scooter could also be seen on the ground.

The horror is understood to have been witnessed by diners eating outside at a seafood restaurant in High Road.

“Every day there is another stabbing. Life is cheap here.” 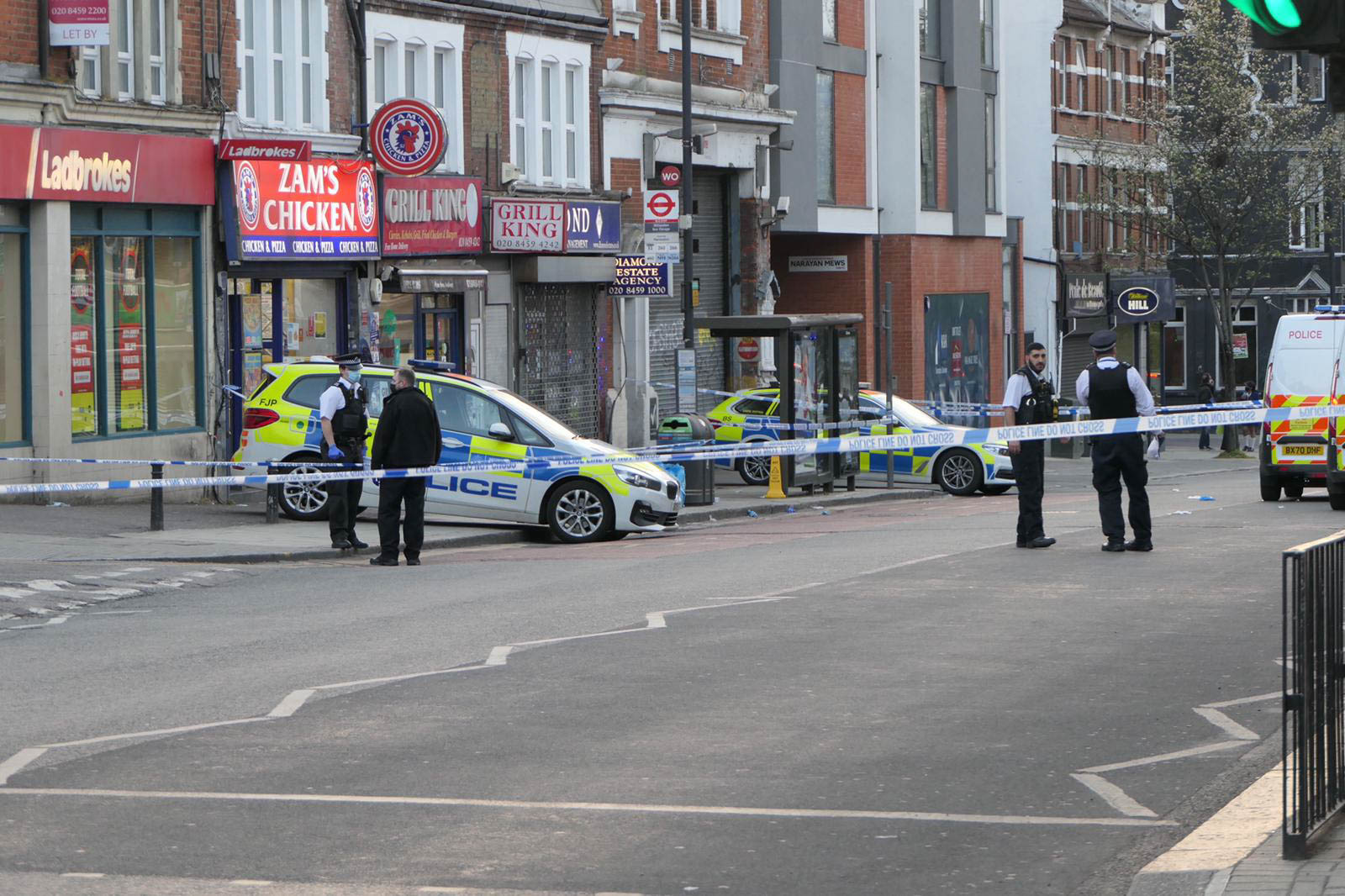 Officers have taped off the high street and are focusing their attention on a bus stop outside a row of takeawaysCredit: UkNewsinPictures 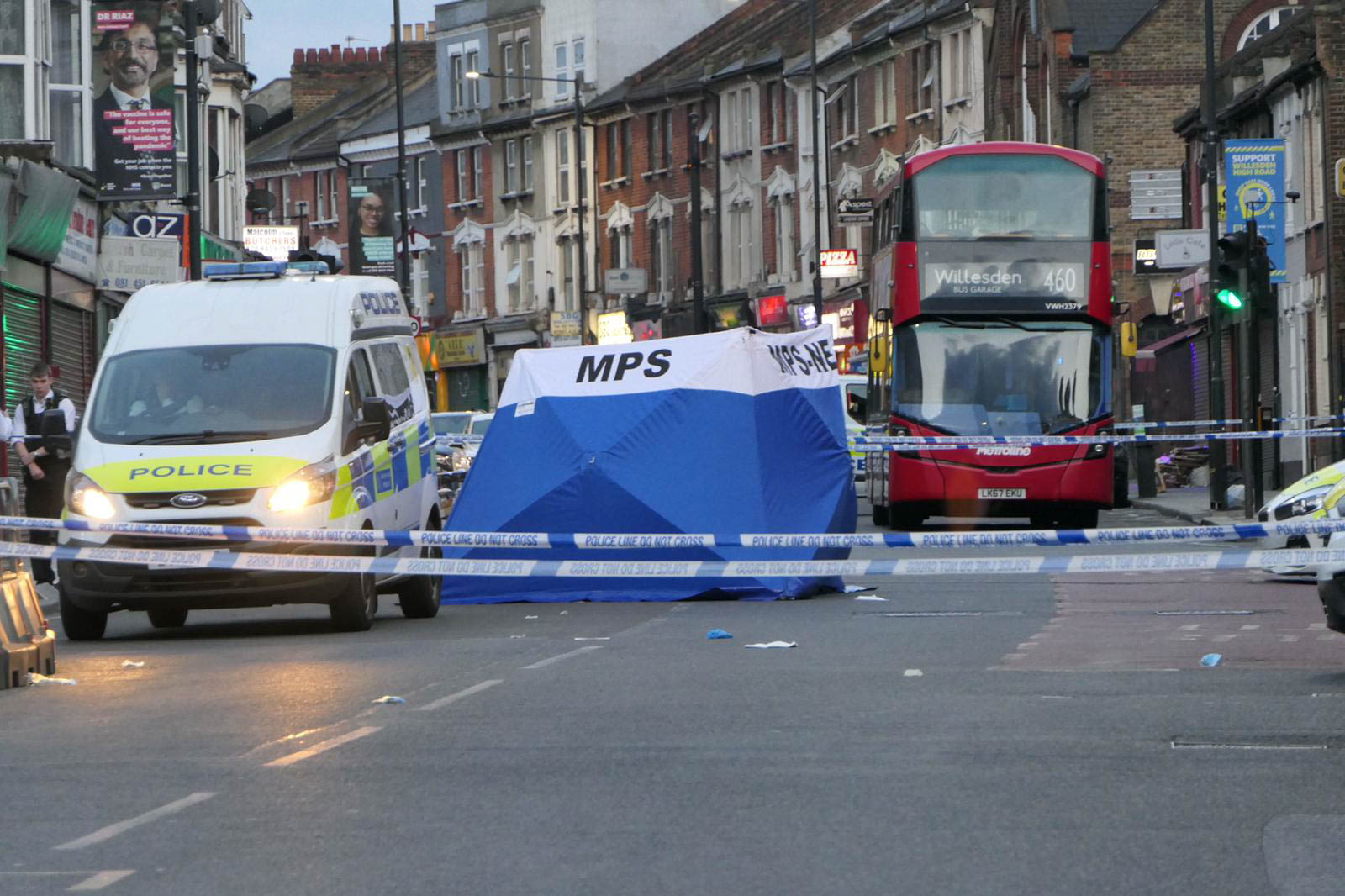 A blue tent has been put up close to a London busCredit: UkNewsinPictures 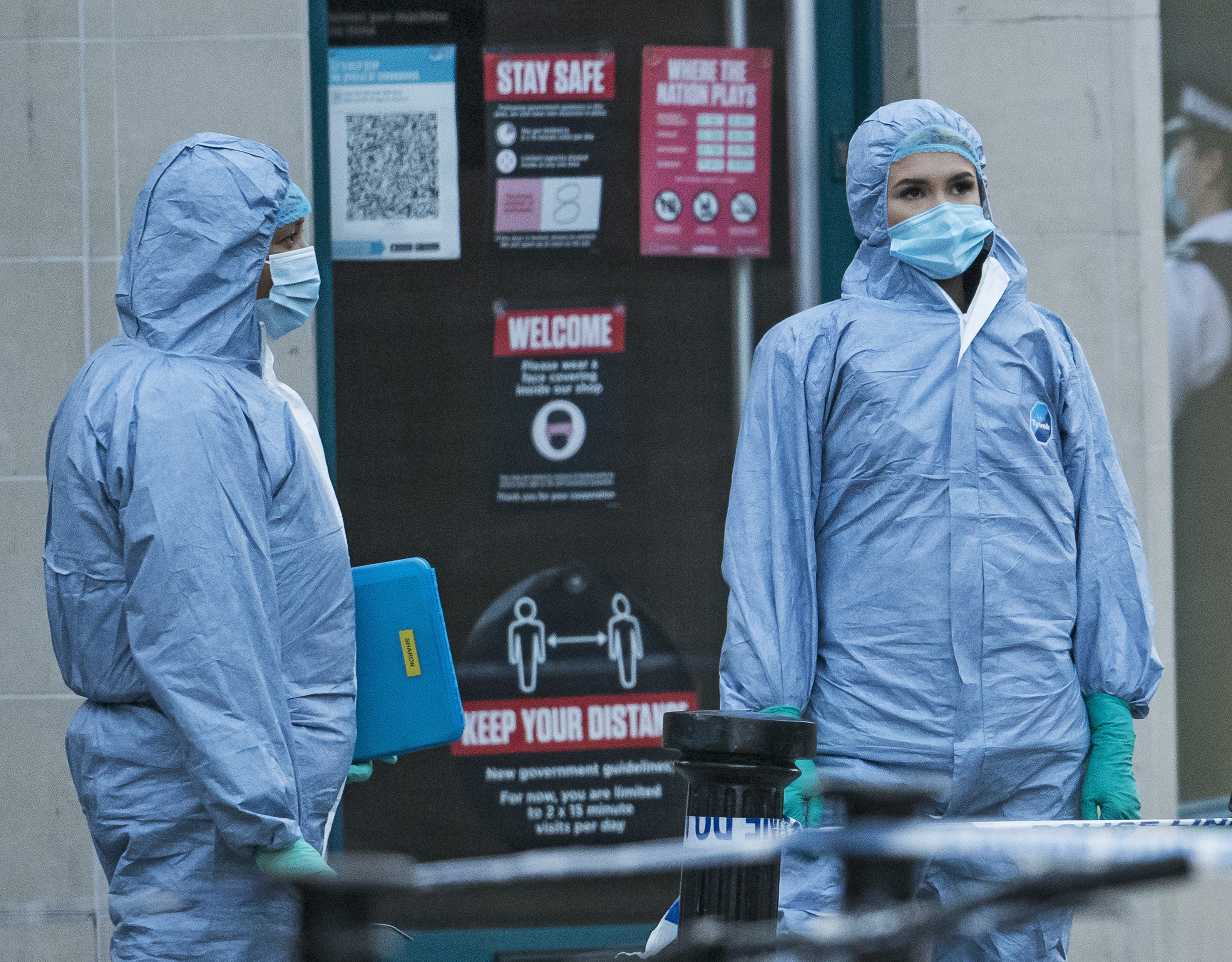 Forensics officers are at the sceneCredit: LNP

A spokesperson from the Met Police said: “Officers were called by the London Ambulance Service at 5.11pm to a report of a man suffering from stab wounds in High Road, NW10. Officers attended.

“Despite the best efforts of the emergency services, the man, aged 40, was pronounced dead at the scene shortly after.

“Work is ongoing to formally identify him and police are in the process of locating and informing his next of kin.

“A crime scene is in place and the public can expect to see an increased police presence in the area.

“Enquiries are ongoing and there have been no arrests.”

Cops have put in place a dispersal order, meaning they can ask a group of two or more to leave the area.

The man’s death is just the latest in a series of tragedies on the streets of the capital. Children are among those who have lost their lives to violence.

On Thursday morning, a 13-year-old boy in school uniform was repeatedly knifed by a gang of teens who “looked like they were having fun”.

The teen is fighting for his life after the shocking incident, which happened as he walked to school on the Isle of Dogs in East London.

A 15-year-old boy has been arrested on suspicion of grievous bodily harm.

On Monday afternoon, Junior Jah, 18, was found knifed to death near his home in Canning Town, East London.

There is no suggestion the stabbings in the east of the capital are linked.

Junior was the 12th teenager stabbed to death in London in 2021.

So far this year, there has been 33 murder investigations launched in London.

Of those, 26 have been stabbings.

Junior was attacked just minutes away from where Fares Maatou, 14, was stabbed in the head with a Samurai sword outside a pizza restaurant while defending his friend last week.