When the mayor of London, Sadiq Khan, completes the relocation of City Hall HQ from Southwark to the Crystal building in the historic Royal Docks, he will become the latest to settle in an area synonymous with arrivals. This autumn, a new promenade theatre show is set to consider other inhabitants – from the past, present and future – of a region undergoing a major regeneration.

The production, named Arrival, is being co-created by the local community, working with directors Jon Bausor and Matthew Dunster. “It’s no accident that the mayor wants to align himself with this area – it’s an area of innovation,” says Dunster. Victoria Dock, which opened in 1855, was a technological feat itself and the show will consider the role of the docks in trade and industry through the products that have arrived there as well as the people.

The production, adds Bausor, will “look across borders to other places that may have a similarity” to the docks. For example, it will contrast the deadly blast at the port in Beirut in 2020 with the Silvertown explosion at the Royal Docks in 1917, when 50 tonnes of TNT blew up and 73 people were killed.

Audiences will wear headphones and follow performers on a journey around the Royal Docks, listening to an audio track and pausing to watch live performance, beatboxing, music, dance, installations and animation. Local residents have been invited to tell their stories for a film that will be projected on the side of the Millennium Mills, an art deco industrial landmark. “The idea is that you can tell your story, on a large scale, in a space where perhaps you’ve not had the opportunity to be seen or heard before,” says Dunster.

That derelict former flour mill, in Silvertown, and the surrounding wasteland – where Terry Gilliam filmed scenes for the dystopian 1985 film Brazil – will be made accessible to many residents for the first time. “It’s one of the few places in the centre of London that has been left as a big ruin,” observes Bausor. “Jon said we have to make sure our participants have access to all these areas,” continues Dunster. “Our starting point was: you are the hosts for this performance. You will welcome people in the way you want to welcome them and introduce them to these sites.”

Bausor, who designed the opening ceremony for the Paralympic Games in 2012, has known the area for years. “It just keeps changing. It’s a melting pot of cultures: 104 languages. There’s a mixture of social housing and private, rich and poor, all in that intersection. There’s a major airport, the DLR runs through it, the O2 is just down the road. It’s an incredible site that has been slightly neglected, and not really understood.” The new Elizabeth line will soon reach the area, too. The mayor’s office says that the Greater London Authority’s relocation there is a catalyst for regeneration which is set to lead to 25,000 new homes and 60,000 new jobs within the next 20 years.

Dunster wanted to “interrogate how local people feel about the place” and he and Bausor got to know residents of the Britannia Village estate, many of whom “feel forgotten” he says. “They’re kind of hidden by all these monoliths and development around them.” The community will take part in Arrival as performers, makers, helpers and audiences. 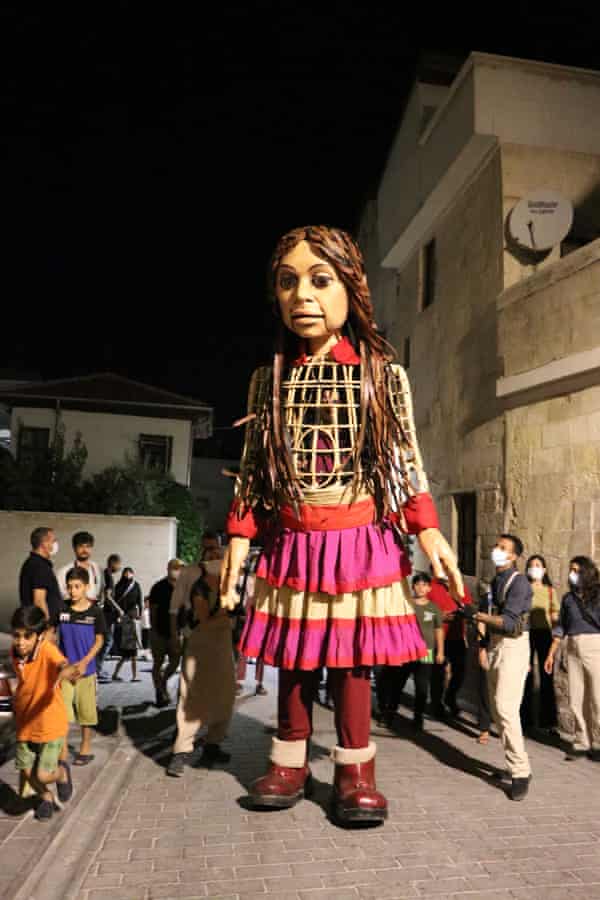 Little Amal, the Syrian refugee puppet, in Gaziantep, Turkey, in July. The puppet will travel 8,000km as part of the theatre project The Walk. Photograph: Anadolu Agency/Getty Images

One of the production’s key themes will be refuge. “East London has been a place of refuge and asylum to people from all over the world,” says Dunster. “Think about the Jewish communities there, Polish, Chinese, Eritrean – the list goes brilliantly on and on.” In recent weeks, their conversations have focused on Afghanistan and the message from the mayor of Newham, Rokhsana Fiaz, who declared the borough “ready to support the resettlement of humanitarian refugees”. As part of a festival taking place around Arrival, the giant puppet Little Amal will arrive on her trek from the Syria-Turkey border in a theatrical act of solidarity with refugees. She will be welcomed into London, “like many others have been welcomed into that port in decades gone by” says Bausor.

He and Dunster have collaborated on and off for years, their productions including National Theatre Wales’s Mametz, about the first world war, also directly engaging community participation. Over lockdown, Dunster and David Jubb created the Culture Plan B podcast about artists and communities who create culture outside major institutions. It led him to seek another large-scale commission and the producers imPOSSIBLE brought him and Bausor onboard for Arrival, which features the playwright Sophie Ellerby, beatboxer Conrad Murray and composer Nontokozo F Sihwa, aka Venus Ex Machina, as lead artists. The group Drum Works and charity the Institute of Imagination are also involved.

Dunster says that when they began work in Newham, they were struck by the number of local artistic initiatives already in place – “how many organisations there are making work with and for the community”. The area’s reputation as a creative hub is spreading, along with that of Woolwich on the other side of the Thames, where a new arts district has opened at the historic site of the Royal Arsenal. Newly resident organisations at Woolwich Works include the Chineke! Orchestra, Luca Silvestrini’s dance-theatre company Protein, the National Youth Jazz Orchestra and immersive theatre specialists Punchdrunk, who this week announced that their most ambitious project to date, The Burnt City, will be staged there.