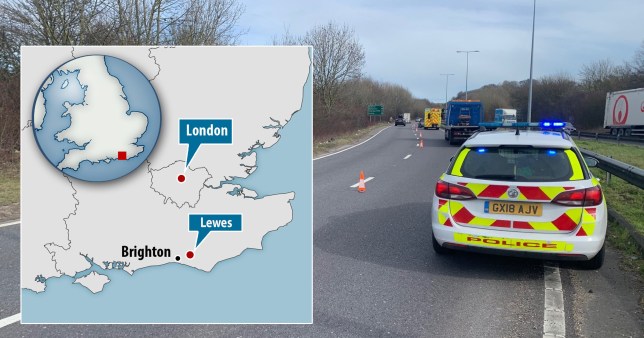 Two people were caught breaking lockdown after crashing their car miles away from home.

The pair from London were hit with fines after police were called to the scene of the collision on the A27 near Lewes, East Sussex, on Thursday afternoon.

When the two occupants of one of the cars involved were asked why they were so far from their home in the capital, they told officers they had just popped out ‘for a drive’.

A spokesperson added: ‘The two occupants of one of the vehicles were issued fines for breaching Covid-19 restrictions, by travelling to Sussex from London ‘for a drive.’ 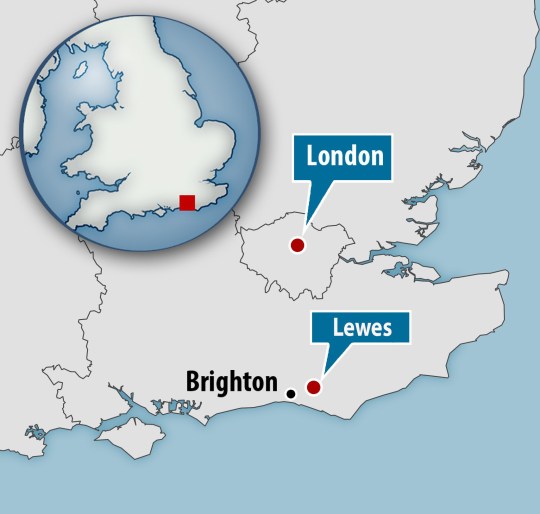 Central London is about 80 miles away from Lewes

Nearly 70,000 fines have been handed out to people breaking lockdown rules across the country.

Yesterday police said they had fined over 40 Londoners caught at an illegal rave in the vault of a disused bank. The party was described as a ‘breeding ground for Covid-19’ and followed a series of illegal gatherings in the capital in recent months.

A police officer was knocked unconscious and seven others injured while trying to shut down a gathering at a house South London on February 28.

Two police officers were also injured after breaking up a huge party of more than 200 people in Beauchamp Palace in Knightsbridge.

Officers attended a collision on the A27 at #Lewes today. Luckily nobody involved suffered serious injuries, but the two occupants of one of the vehicles were issued fines for breaching Covid-19 restrictions, by travelling to Sussex from London ”for a drive”. #StayHome#CK159 pic.twitter.com/r0UqB8BEfI

Police vowed to get tough on lockdown rule breakers earlier this year when the nation was plunged into its third lockdown as the Kent variant sent cases soaring.

This week marked the first small step of restrictions relaxing, as schools in England reopened.

People are also now allowed to meet up with one other member of a household for a coffee or picnic in the park.

But the Government’s ‘Stay At Home order’ still applies, with people only allowed to leave for essential reasons such as work, a food shop and exercise.

It will come to an end on March 29, when groups of six will be able to meet outdoors.

How to activate Emergency SOS on iPhone and Android