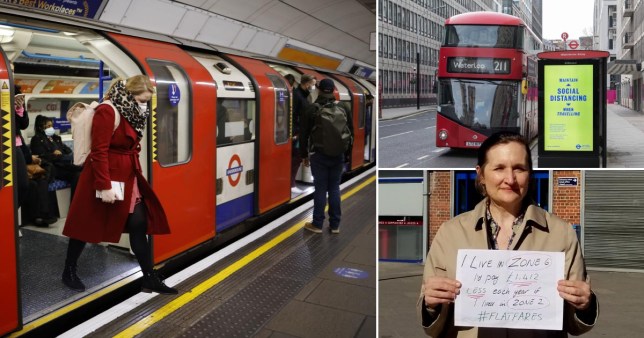 Londoners will see an increase in tube and rail fares from Monday (Picture: Getty/London Green Party)

There are calls for London to scrap its Tube zones and bring in a flat rate for all commuters, with the cost of travel in the capital rising again on Monday.

Londoners will see travel cards, tube, bus and tram fares increase as a condition of an emergency coronavirus bailout for the struggling Transport for London.

The changes, announced in January but coming into effect today, mean fares in the capital will rise by 2.6% on average across all services – though some single pay as you go Tube, DLR, London Overground and TfL rail fares remain unchanged.

There are also fears that the price hikes could impact those on lower incomes in the capital – though there is relief that bus fares did not rise by more.

It follows five years of ‘fare freezes’ on single journeys in London and comes as commuting in the capital has nosedived because of the pandemic.

But the London Mayoral candidate Sian Berry claims two workers in the same hospital should pay the same fare to get to work ‘no matter where they live’ – suggesting scrapping Underground zones would be a fairer system.

Andree Frieze, a London councillor, believes commuters should pay the same regardless of which Tube zones they travel from and to (Picture: London Green Party)

Ms Berry, who is also the Green Party leader and a London Assembly member, said it now costs more than £3,100 to travel into central London from Zone 6, compared to £1,700 from Zone 2, using a weekly travel card, and says the difference has increased over time.

Instead she wants all tube and rail journeys to cost the same, as has been the case on London buses since 2004.

Critics are likely to say that the plan would be costly and that it is fair to make those who travel further pay more.

Ms Berry said: ‘More and more people are being pushed to the edges of London because of housing costs in the centre, only to be punished by spiralling transport costs when they move. 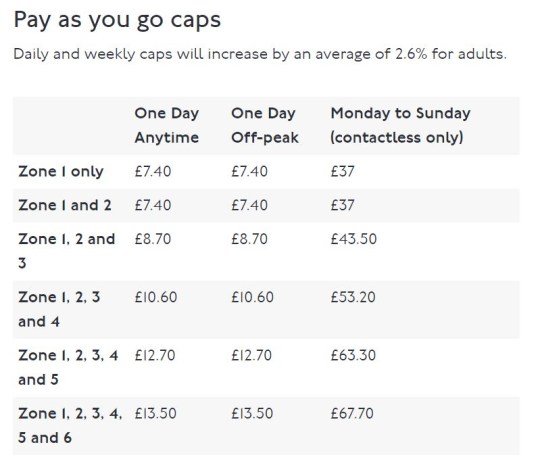 The new pay as you go caps in London (Picture: TfL)

‘This isn’t fair. Two workers in the same central London hospital should pay the same fare to get to work no matter where they live.’

The changes come on the same day that rail fare nationwide also increase.

In the capital, all current concessions – including free travel for young people under the age of 18 – will remain in place, with the Santander hire bikes also costing the same.

But the daily ‘cap’ on contactless and Oyster payment will rise between 1.9% and 3.3%. 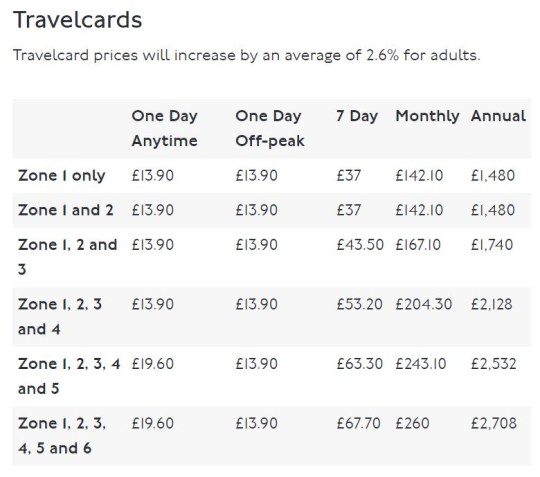 Meanwhile on buses, the daily cap will increase by 15p to £4.65 – the same price as three single journeys – and passengers will still be able to ‘hop’ between buses within an hour for a single fare price.

London TravelWatch Director Emma Gibson said: ‘Londoners are not going to be happy about these fares rises, especially those suffering financially as a result of the pandemic.

‘But we are pleased to see that bus fares have been kept relatively low, as buses are most used by lower income Londoners including the many key workers who have been keeping the capital going.’


Mr Khan said: ‘Unfortunately this year Ministers insisted on a RPI+1 per cent fares increase in order for TfL to get the emergency Government support needed as a consequence of the global pandemic.

‘Public transport should be affordable to all, so I am pleased that I was able to fight off even worse Government proposals to scrap free travel for under 18’s and concessions for over 60’s as well as bigger fares increase.’

London Conservatives have accused the Mayor of losing control of the capital’s finances.

TfL’s Director of Strategy Shashi Verma said: ‘Through daily and weekly capping, as well as the Hopper fare, passengers can continue to get the best value fare by using pay as you go with contactless and Oyster.’

A full list of new prices is available here.