A man appears to have taken his own life in the reception of a police station in north London.

Stoke Newington police station was abruptly closed last night after the 68-year-old climbed onto a telephone kiosk in the front office and jumped off.

He sustained critical injuries and despite the efforts of officers and the ambulance, he was pronounced dead at the scene.

A spokesperson for the Metropolitan Police later told Metro.co.uk a suicide note was discovered.

Officers cordoned off the area and set up large screens while an investigation was carried out.

Hackney Police confirmed the incident on social media, adding that his death is not being treated as suspicious.

An update on Twitter said: ‘The man who died is a white man in his 60s. 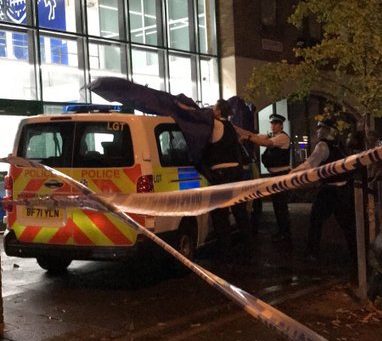 Officers blocked the public’s view to the station (Picture: Twitter)

‘At no point was he detained or arrested by officers and he entered the front office of his own volition.

‘The circumstances are under investigation. The death is not being treated as suspicious.’

A video posted online by group Tottenham Copwatch also shows an officer telling activists who had gathered outside that the man had been at the station since 9am.

His name or any further details of the incident are yet to be released by the force.

A statement from the Met said: ‘The front office at Stoke Newington police station has now reopened to the public. 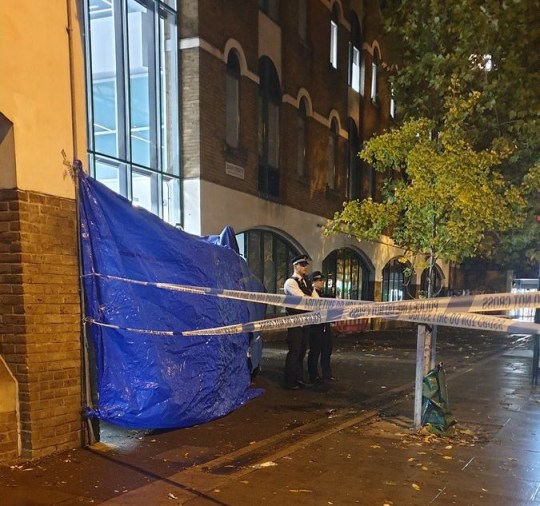 The circumstances of his death are under investigation (Picture: Twitter)

‘It was closed at around 6pm last night when a man climbed onto a telephone kiosk in the front office and jumped off, sustaining critical injuries.

‘Despite the efforts of police officers and ambulance colleagues, the 68-year-old man was sadly pronounced dead at the scene.

‘Officers have informed the family of the man who died. A suicide note was found and a report will be prepared for the coroner.

‘He does not appear to have made any effort to report anything to police.

‘The Met’s Directorate of Professional Standards have been informed of the death.

‘Cordons were put in place following the incident as is routine when a person dies in a public area.

‘Officers are committed to engaging and working with our communities.’