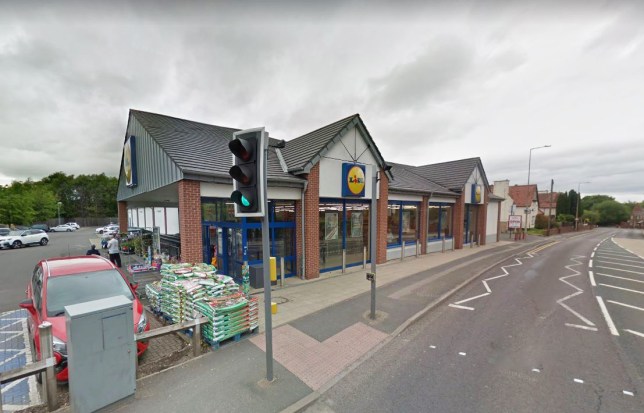 A supermarket worker who was sacked after showing off his ‘swastika’ tattoo to colleagues has won an unfair dismissal case after a judge ruled he should have been given a ‘stern warning’ instead.

Lidl caretaker Istvan Horvarth lost his job at the budget chain’s store in Telford Hadley, Shropshire, after another member of staff complained in April 2019.

But Lidl fought the case after an internal investigation concluded the angle of the design on his arm resembled a Nazi swastika rather than the ancient religious image.

Mr Horvarth is now in line for a compensation payout after an employment judge concluded that while the swastika was offensive, bosses at Lidl – who said his behaviour was ‘massively inappropriate’ – should not have sacked him.

Judge Ian Miller said he should have instead received a warning about the company’s uniform policy.

The employment tribunal in Birmingham was told Mr Horvarth started working at the branch in 2013.

In April 2019 a colleague – identified only as MB – complained that he had approached him on his second shift at the store to ask about his tattoos.

He claimed Mr Horvarth then showed him his swastika tattoo whilst laughing and saying it was his country’s national symbol.

The colleague said: ‘(Horvarth) exposed the top of his arm and shoulder and pointed to a tattoo of the swastika symbol.

‘I thought it was disgusting for someone to brazenly show it as a proud symbol.

‘I come from a military background so I was not impressed for that to be displayed so publicly in a company that promotes equality and the acceptance of people from different backgrounds.’

MB added that he saw other far right symbols tattooed on Mr Horvarth and that the swastika was surrounded by barbed wire.

The incident was reported to boss Craig Taylor who suspended Mr Horvarth after also receiving another complaint that he had kicked another store worker.

Upon hearing about the tattoo, that employee told Mr Taylor that as a gay woman she felt ‘uncomfortable’ about him apparently showing off the hate symbol.

The supermarket’s investigation found that it was in fact a Nazi swastika in spite of Mr Horvarth’s claims otherwise because it was rotated clockwise and tilted at a 45 degree angle.

Mr Shaw said in his evidence: ‘These are sensitive issues and I felt it was massively inappropriate for (Mr Horvarth to be) behaving this way.

‘I felt that him showing the tattoos at work was damaging to Lidl’s reputation.’ 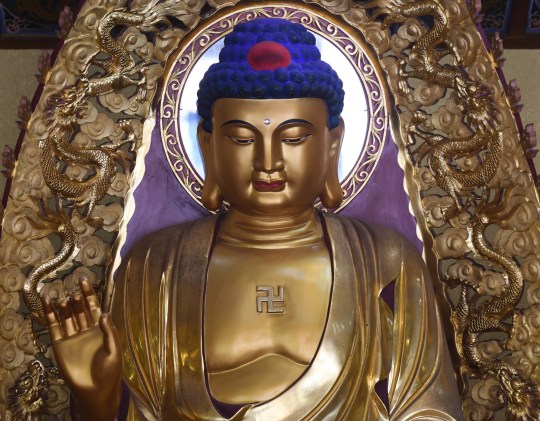 A Buddha statue with a swastika symbol (Picture: Artur Widak/NurPhoto via Getty Images)

Judge Miller agreed the symbol was offensive and that Lidl’s research into the tattoo did show that it resembled a swastika, saying: ‘Clearly it is beyond any sensible doubt that a Nazi swastika is offensive to most people for obvious reasons.’

But he ruled that a ‘stern warning about uniform policy’ would have been more reasonable than sacking him.

In relation to the kicking incident, Judge Miller said that, again, a warning to be more careful and sensitive around new employees would have been the most appropriate response to his behaviour.

Upholding his claim for unfair dismissal, the judge found that Mr Horvarth was not given the opportunity to respond to all the allegations against him during the investigation and disciplinary hearing processes.

Judge Miller also found he was fired because Mr Taylor and Mr Shaw had biased perceptions of him as a ‘troublemaker’ and ‘bully.’

However, his claims for race discrimination were dismissed. A hearing to determine compensation will take place at a later date.