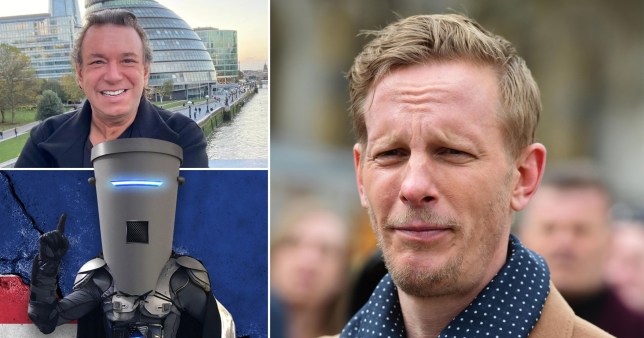 Peter Gammons (top left), Count Binface and Laurence Fox are among the candidates polling at 1%

Laurence Fox is tied in the race for London Mayor with Count Binface, a new poll suggests.

The unlikely pair are languishing near the bottom of a record number of candidates, with both attracting around 1% of voters along with UKIP’s Peter Gammons.

Labour Mayor Sadiq Khan looks on course for a relatively easy victory in the contest – with Comres/ITV’s research predicting that the incumbent will take 41% of the first round votes to Tory Shaun Bailey’s 28%.

After second preferences for candidates outside the top two are redistributed, the poll suggests Mr Khan will have 61% of the votes.

Trailing the front runners are Lib Dem Luisa Porritt on 8%, who is battling Green leader Sian Berry – currently on 6% – for third place.

YouTuber Niko Omilana is the surprise performer in fifth on 5%, followed by independents Brian Rose and Farah London on 2%.

A host of other less well known candidates are also polling at less than 2% – with some, including Piers Corbyn, on less than 1% – ahead of the May 6 election. 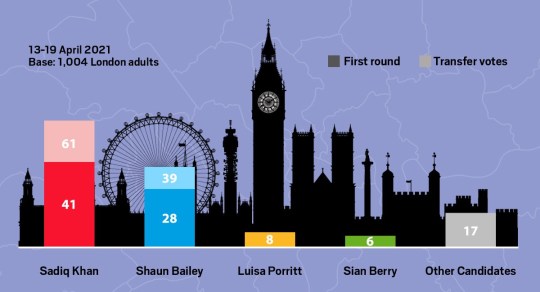 Sadiq Khan looks set to win easily, with an expected 61% of the vote once second preferences are transferred (Picture: Metro.co.uk)

But it was the controversial actor Mr Fox’s position in the polls and the comparison with Binface that amused social media, with the satirical candidate noting that he had spent nothing on his campaign compared to millions splashed out by his rival.

He added: ‘Foxes have been attacking bins for too long in London. Now it’s payback.’

Dr Gammons has previously acknowledged the fun poked at his name on social media and labelled it ‘funny’, adding that he offers a ‘real alternative’ for the capital.

Mr Fox has only just set up his new Reclaim party and this week told Metro.co.uk that he has a long way to go to change things, as part of the website’s ‘Ideas for London’ series.

Laurence Fox is currently polling equal to Peter Gammons – a man with gammon in his actual name – and Count Binface, a man who is forced to wear a bin on his head after losing the copyright to wearing a bucket on his head

Tables are on our website but the ‘Other’ breakdown is…

Experts often stress that individual polls can have reliability issues for a number of reasons, but Mr Khan has long been comfortably ahead in various forecasts and is widely expected to win.

The election was delayed last year because of the coronavirus crisis.

Meanwhile, the main candidates have faced criticism for planning not to attend a husting about violence towards women and girls in London on Wednesday evening.

The WEP’s Ms Reid commented: ‘It says everything that just weeks after the murder of Sarah Everard, where politicians lined up to say that ending violence against women and girls was their top priority, I am the only mayoral candidate showing up to a hustings on that very subject and standing up for women.’