Around 3,800 years ago our planet was rocked by a mega earthquake (Credits: Getty Images/EyeEm)

Scientists have discovered evidence of the largest earthquake in history – which caused a tsunami stretching more than 5,000 miles from Chile to New Zealand.

The ancient super-earthquake is thought to have taken place in northern Chile 3,800 years ago and had a magnitude of around 9.5.

University researchers believe the quake resulted in a large-scale tsunami, with waves sending boulders the size of cars almost a kilometre inland.

Earthquakes happen when two tectonic plates rub together and rupture – the longer the rupture, the bigger the earthquake. Previously, the largest known event in the world happened in 1960 in Southern Chile.

Professor James Goff, of the University of Southampton, who co-authored the study, said: ‘It had been thought that there could not be an event of that size in the north of the country simply because you could not get a long enough rupture.

‘But we have now found evidence of a rupture that’s about one thousand kilometres long just off the Atacama Desert coast and that is massive.’

The research team discovered evidence of marine sediments and insects in the Atacama Desert, which would ordinarily have been found in the sea. 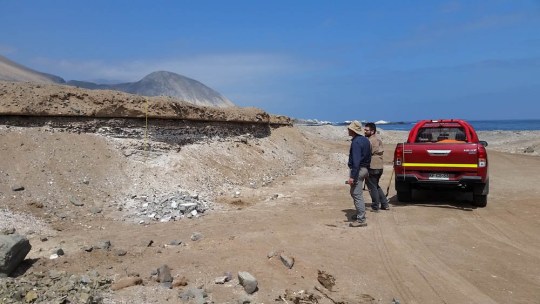 They were so far in-land that the scientists determined a storm would not have been strong enough to transport them there – leaving a tsunami as the only answer.

They believe the enormous rupture of the plates caused the coastline of northern Chile to lift up, generating a massive tsunami.

Professor Goff added: ‘The Atacama Desert is one of the driest, most hostile environments in the world and finding evidence of tsunamis there has always been difficult.

‘However, we found evidence of marine sediments and a lot of beasties that would have been living quietly in the sea before being thrown inland.

‘And we found all these very high up and a long way inland so it could not have been a storm that put them there.’ 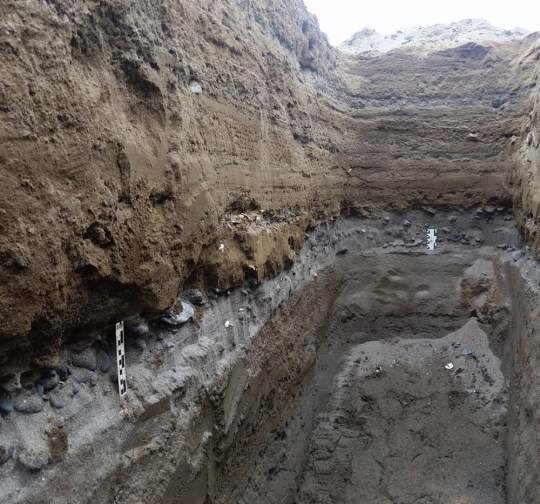 The 3,800 year old tsunami deposit is clearly visible in the lower part of the trench, marked by scales (Credit: James Goff)

3,800 years ago the coastline of the Atacama Desert was home to hunter-gatherer communities. Excavations of archaeological sites found stone buildings which had been destroyed by the waves, lying beneath the tsunami’s deposits.

Some of walls had toppled towards the sea, most likely from the strong currents of the tsunami’s backwash.

Professor Goff added: ‘The local population there were left with nothing.

‘Our archaeological work found that a huge social upheaval followed as communities moved inland beyond the reach of tsunamis.

‘It was over 1000 years before people returned to live at the coast again which is an amazing length of time given that they relied on the sea for food.

‘It is likely that traditions handed down from generation to generation bolstered this resilient behaviour, although we will never know for sure.

‘This is the oldest example we have found in the Southern Hemisphere where an earthquake and tsunami had such a catastrophic impact on people’s lives, there is much to learn from this.’

Prior to this study Professor Goff had been investigating a site in New Zealand which included a vast number of boulders, some the size of cars, that had been thrown hundreds of metres inland.

These boulders date back to around the same time period as the earthquake in Northern Chile.

By pure coincidence, a week later, he was asked to study the rupture sites in northern Chile which have now provided the answer. 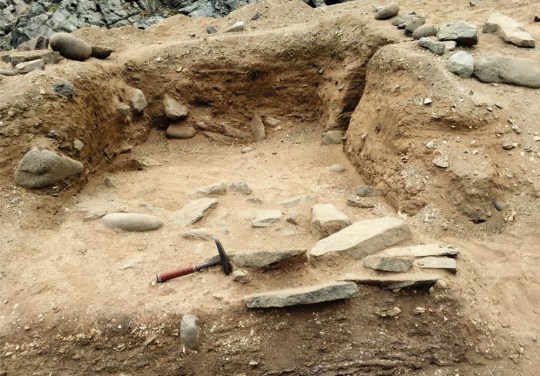 At the Northern Chile archaeological site, experts found a collapsed stone structure with stones pointing towards the sea as a result of being knocked over by the tsunami’s backwash (Credit: Gabriel Easton)

He said: ‘In New Zealand we said that those boulders could only have been moved by a tsunami from northern Chile and it would need to be something like a 9.5 magnitude earthquake to generate it. And now we have found it.’

The researchers believe their findings provide important time context for understanding earthquake and tsunami hazards in the Pacific region, and how severe the effects will be next time such a super-earthquake happens.

Professor Goff concluded: ‘While this had a major impact on people in Chile, the South Pacific islands were uninhabited when they took a pummelling from the tsunami 3800 years ago.

‘But they are all well-populated now, and many are popular tourist destinations, so when such an event occurs next time the consequences could be catastrophic unless we learn from these findings.’