A landlord bought a failing pub after hitting ‘rock bottom’ while going through a divorce – and it turned out to be the best thing he could have done.

Doran Binder, 49, took on The Crag Inn in Wildboarclough, near Macclesfield, Cheshire, in 2016 when he was going through a difficult time.

Soon after the acquisition he had to get the water tested to make sure it was safe for the public to drink, and feared he would be hit with a huge bill to sort it.

But the reality couldn’t have been more different – Doran discovered his pub was sitting on a ‘liquid goldmine’ of some of the purest water in the world.

The dad of five said: ‘We were living 900 metres away on a farm, and we got divorced. I thought if I bought the pub I could be close to the kids.

‘I knew the pub was failing, but I thought I’d just buy it and see what happened.

‘At the time I was working in New York and quite happy. I bought this, I’m commuting two weeks here, two weeks there, I’ve got a great little life.

‘I thought: “I’ll run it for a year, see how it goes and then make a decision about what we do with the pub.”‘ 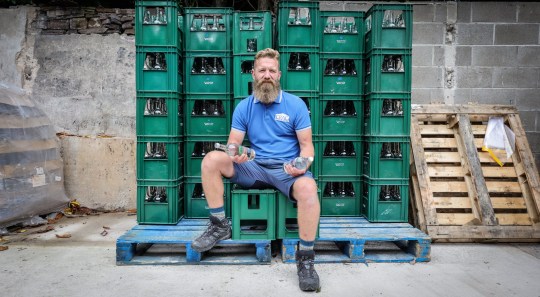 He discovered his pub, in Wildboarclough in Macclesfield, was sitting on a ‘liquid goldmine’ of some of the purest water in the world (Picture: MEN Media) 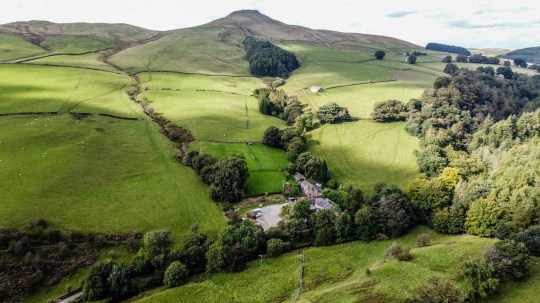 Doran had hit a ‘vein of gold’ coming off Shutlingsloe Hill in Cheshire (Picture: MEN Media)

Doran said he asked Blair Water to run the water testing, and owner Richard Taylor sat down in the pub with him afterwards.

He added: ‘I’ve never met him before, and the first thing he says to me is: “Do you know how good your water is, mate?” He said he’d told the previous owners for 20 years that they should be bottling it and selling it, but they never did.

‘He said: “I’ve been drilling water for 40 years, all over the world, and this is the best water I’ve drilled by a mile, anywhere.”

‘He said there was nothing geologically to indicate good water in the area, but what I’d hit was a “vein of gold” coming off Shutlingsloe Hill.’

The aquifer, which runs 27 metres below the pub, is filled with 700,000 litres of the pure water – enough to fill more than a million bottles a day.

Doran sent a sample of the water to be tested and accredited by the water company.

He said: ‘I was at New York Fashion Week on a runway when my phone rang and it’s Richard Taylor, and he goes: “I’ve got the results, sell everything you’ve got, hand in your notice, come back here and start bottling it.”‘ 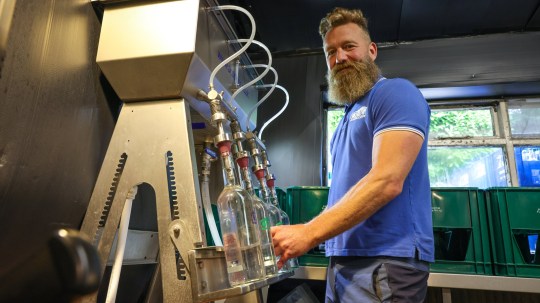 Doran gave up his job and started putting everything into his bottled water business (Picture: MEN Media)

Doran handed in his notice at Bumble and Bumble, a hair care product company in New York, and started bottling the water in May 2018.

He shut the pub and converted it into a bottle processing plant. He uses only glass bottles, which are washed and refilled when they are returned instead of recycled.

Doran said: ‘For the first year-and-a-half I was on my own in there.

‘There was no bottle washer, there were three sinks. I was washing them by hand and I didn’t have any money to employ anyone.

‘I was still sceptical – surely I can’t just make money from putting water into bottles?’

But after three months he was approached by a boutique American water company.

Doran said: ‘They got in touch with me on Instagram and asked me for samples. I thought: “Okay, this where I get rumbled.” These people are global experts, they sell the finest waters in the world.

‘I reluctantly sent it to them, put it on a credit card because I had no money and it was about £85, and then a week later they asked for a Skype meeting.

He is passionate about reusing glass bottles and refuses to convert to plastic to make more money (Picture: MEN Media)

‘The first thing they said was: “This is one of the finest waters we’ve ever tasted.”

‘They didn’t think I was doing it justice by putting it in reusable glass bottles, they thought the water was better than that and they thought it was a bit of a marketing gimmick.’

They told him they could sell his water for up to $50 a bottle – but he decided not to supply them as he wanted to head in an environmentally friendly direction.

The glass bottles are delivered by crate straight to the doors of customers, either in the company’s van or via morning milk rounds.

Doran is proud of the company’s environmental credentials, and is passionate about using glass and not plastic.

He said: ‘We think about recycling as a green thing, but we take a bottle, put it in a recycling bin, it gets transported somewhere, it gets crushed, and then gets turned back into what it was.

‘To me it seemed like the epitome of insanity but that’s what we considered “green”.

‘Hopefully here now we can make some kind of a difference. I can count how many bottles we’ve reused, and it’s already up to more than a hundred thousand bottles that haven’t been buried or recycled.’

Doran intends to keep growing the business, and often receives calls from India, China, the US and South Korea.

‘We want to grow it as big as we can but I don’t mean big in a financial sense, I mean big in terms of making a difference,’ he said.

He is currently building a unit which will automate the process and help him produce in an hour what his team currently does in one day.

The firm also provides internships in collaboration with The Rossendale Trust, which works with people with learning difficulties.