Kwasi Kwarteng says he ‘had no other choice’ other than the mini-budget measures which sent the markets into free-fall this week.

The chancellor said he intends to do ‘something different’ in a bid to shake the economy from more than a decade of low growth.

He admitted the strategy has caused ‘disruption’ after a week in which the pound hit a record low and the Bank of England was forced to spend billions to stop a market meltdown.

A package of unfunded tax cuts on top of massive spending to cover spiralling energy bills has shaken investor confidence in the government’s ability to fix the economy.

But Mr Kwarteng and Liz Truss have steadfastly refused to change course or even bring forward the publication of a detailed plan explaining how it will all be paid for.

With investors watching their every move, the prime minister and Chancellor have been largely silent this week but now Mr Kwarteng has given his fullest explanation of his rationale this week.

Writing in The Daily Telegraph, he said: ‘The British taxpayer expects their government to work as efficiently and effectively as possible, and we will deliver on that expectation. 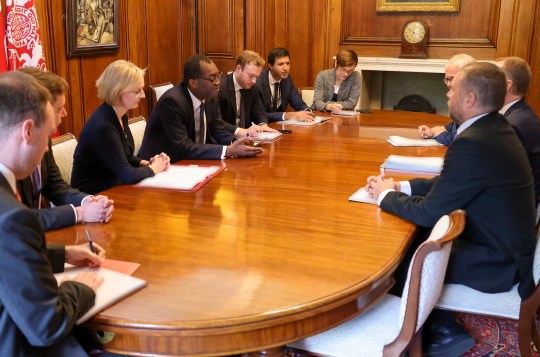 The prime minister and Kwasi Kwarteng held an emergency meeting with the body tasked with marking the government’s homework on the economy (Picture: Number 10)

‘Not all the measures we announced last week will be universally popular. But we had to do something different. We had no other choice.’

The Chancellor also insisted he will produce a ‘credible plan’ to get the public finances back on track with a ‘commitment to spending discipline’.

As Tories prepared to head to Birmingham for their annual conference, Liz Truss warned the country faced a ‘difficult winter’ ahead as she indicated she had no plans to reverse her tax-cutting agenda.

She told reporters: ‘I recognise there has been disruption but it was really, really important we were able to get help to families as soon as possible.

‘This is going to be a difficult winter and I am determined to do all I can to help families and help the economy at this time.’

Along with other senior government figures, she has hinted benefits could be slashed in order to help pay for the tax cuts, which disproportionately benefit society’s richest.

The inflationary impact of the measures, at a time when the cost of everyday goods are already spiralling, will almost certainly mean a rapid rise in the interest rate in a matter of weeks.

Homeowners will be hit hard and mortgage payments surge and there are fears many won’t be able to pay. 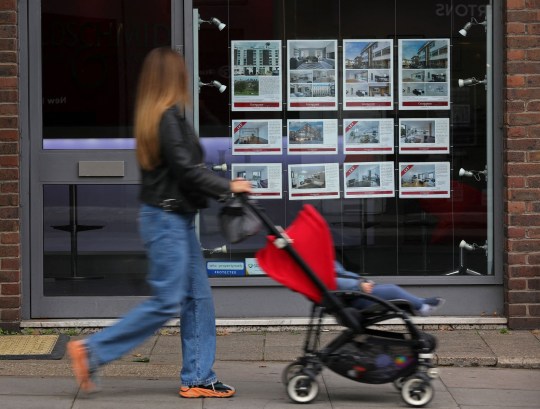 Many experts fear a crisis in the housing market could be looming when interest rates start to shoot up (Picture: AFP)

Labour has surged in the polls amid the government’s economic woes, hitting an astonishing 33-point lead in one Yougov poll.

Mr Kwarteng is due to publish a medium-term fiscal plan setting out how he intends to get debt falling as a proportion of GDP alongside an updated set of economic forecasts from the Office for Budget Responsibility (OBR) on November 23.

The absence of new projections from the independent OBR was seen as one of the key reasons why the markets reacted so badly to the Chancellor’s mini-budget.

Some Tory MPs have been pressing him to bring forward the date of publication so as to restore market confidence in the Government.

After a highly unusual meeting on Friday with both the Prime Minister and the Chancellor, the head of the OBR, Richard Hughes, confirmed they would deliver their preliminary forecasts to the Treasury at the end of next week.

However, Mr Kwarteng has made clear that he wants to stick to the November 23 date to allow ministers to set out a series of supply side reforms to support the growth plan.