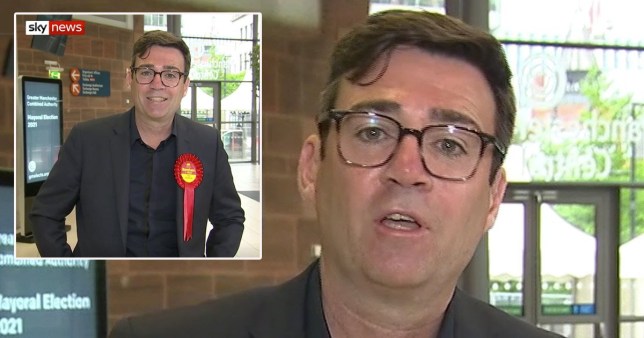 The mayor was re-elected with 69% of the vote and more than twice the number of votes his Tory opponent received (Pictures: Sky News)

Andy Burnham has hinted at a future run for the Labour leadership following his landslide re-election as Manchester Mayor.

Mr Burnham, dubbed ‘King of the North’, has run and lost Labour’s leadership race twice before in 2010 and 2015.

After being re-elected as Metro Mayor, he told Sky News: ‘In the distant future, if the party were ever to feel it needed me, well I’m here and they should get in touch.’

But he also underlined that he was focusing on Greater Manchester and noted that he would need to go back into Westminster politics and become an MP again to stand for the head of the Labour party.

Mr Burnham’s victory speech is what originally sparked speculation that he might consider running for leadership again.

Addressing Labour’s disappointing performance so far, he said ‘they’ need to change instead of ‘we’.

Sky News asked him if his speech was a leadership pitch but he responded: ‘Not at all’.

Manchester is one of the few victories Labour has seen in this year’s local election.

The Tories won over Hartlepool, which has voted Labour since its seat was created in Parliament in 1974, building on Conservative success in 2019 where Boris Johnson helped turn Labour’s ‘red wall’ blue.

Mr Burnham addressed this in his interview saying the party needed to do some ‘soul searching’ and figure out why it has ‘lost an emotional connection with parts of the country’.

Sir Keir Starmer himself has echoed similar feelings, promising to do ‘whatever it takes’ to win people’s trust back for Labour.

The local elections have not been totally devoid of hope for the Labour Party though.

The metro mayor races saw the party also hold onto Liverpool and gain West England and Cambridgeshire and Peterborough from the Tories.

Labour has also held onto power in Wales, winning with its best-ever result of 30 seats – just one short of a majority.

Sadiq Khan was also re-elected as London Mayor after beating Tory rival Shaun Bailey by a margin of 55% to 44%.

But the party does not have a long list of victories to celebrate as it has lost seats all over the country to the Tories.

A major row was brewing on Saturday night after Deputy Labour leader Angela Rayner was sacked from her role as chairman and national campaign coordinator.

Some accused Sir Keir of using his second in command as a scapegoat when he had said just a day earlier that he accepted responsibility for Labours losses.