A MEDIC was stabbed at a hospital in Scotland as cops raced to a car crash and another “serious incident” nearby last night.

Cops and emergency services raced to Crosshouse Hospital in Kilmarnock after a member of staff was stabbed before two other “serious incidents” that are linked happened nearby. 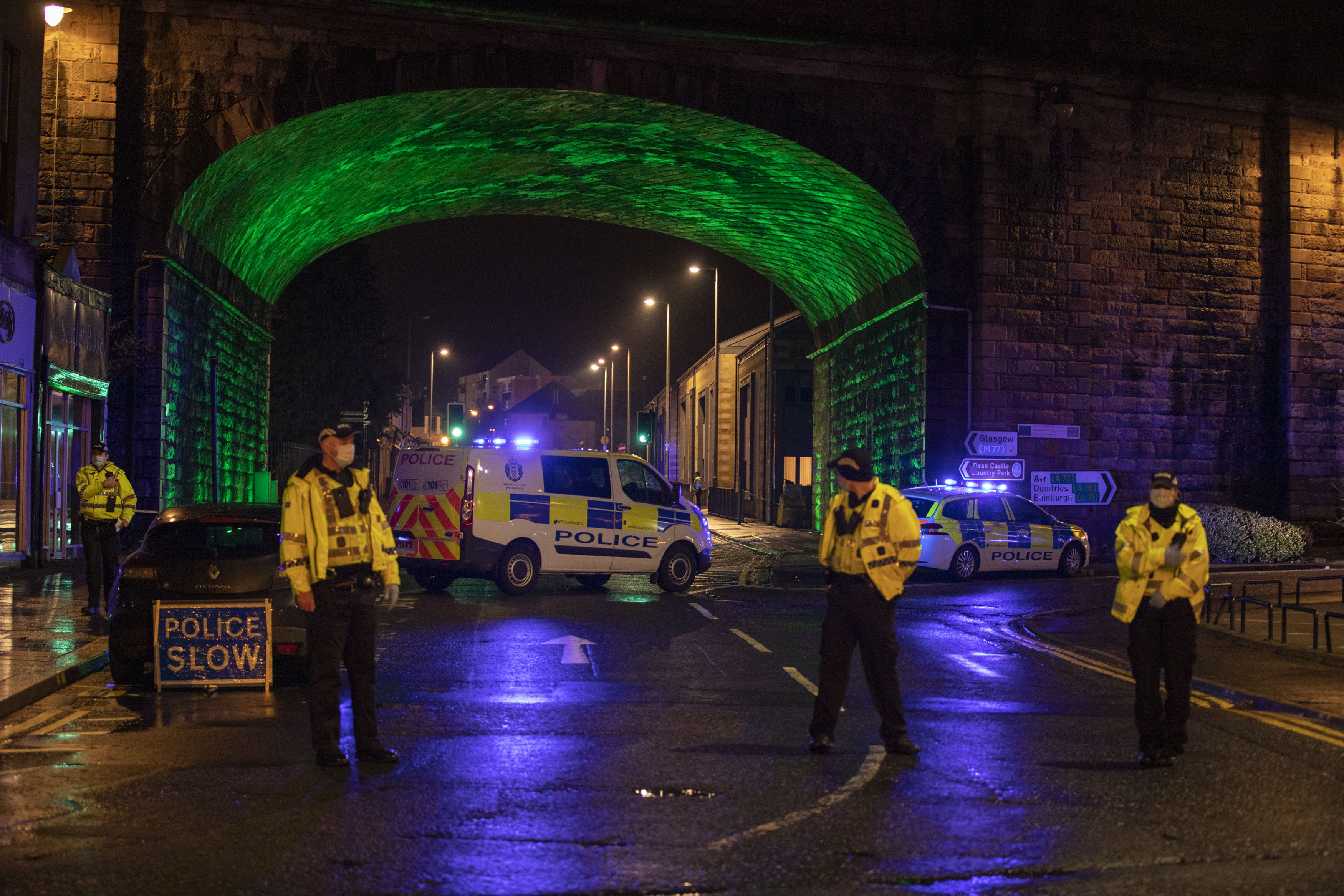 Police stand at Portland Street that is closed to the public as they carry out their investigationCredit: jamiewilliamson.com 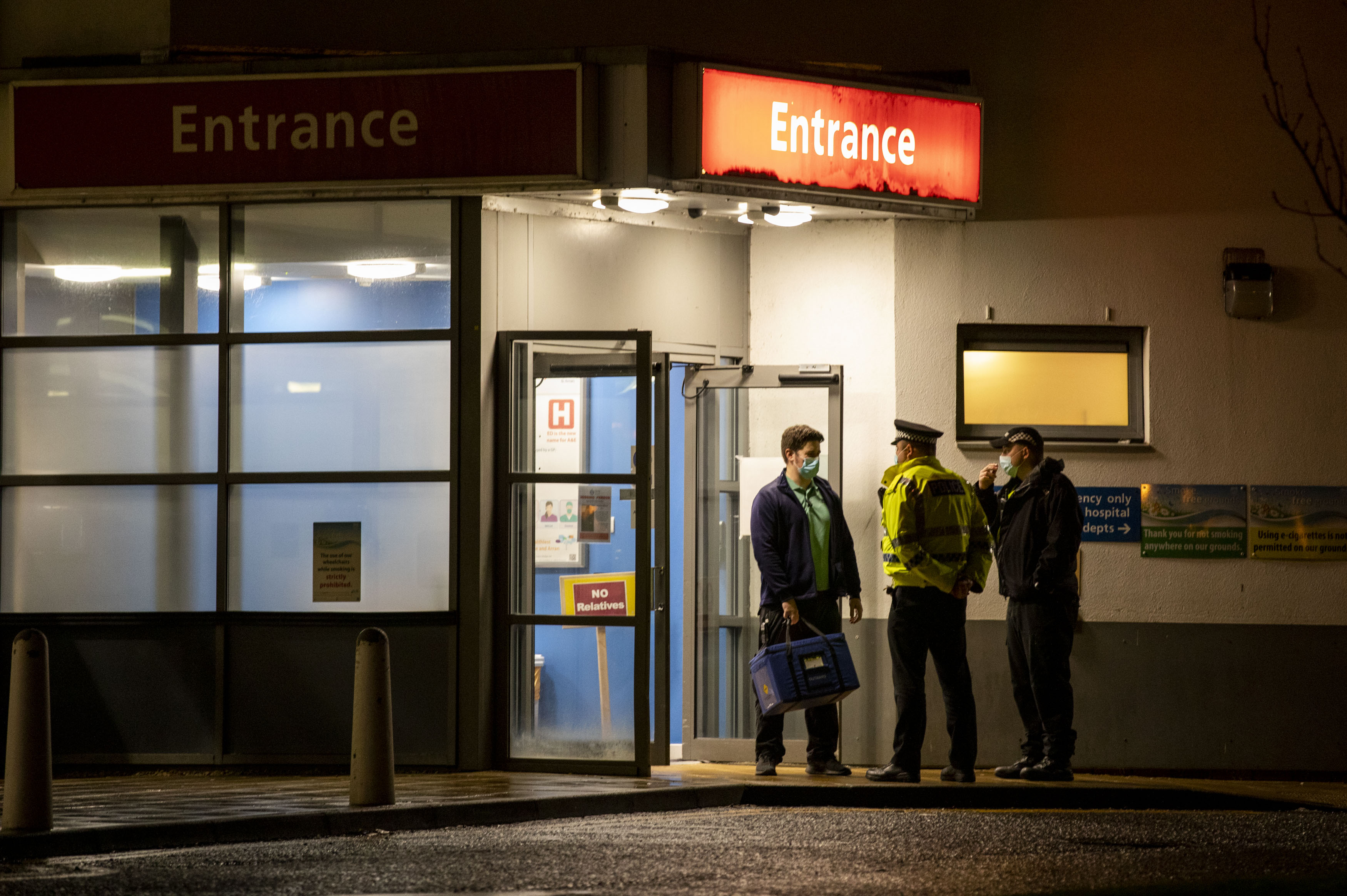 Police outside the entrance of Crosshouse Hospital in KilmarnockCredit: jamiewilliamson.com 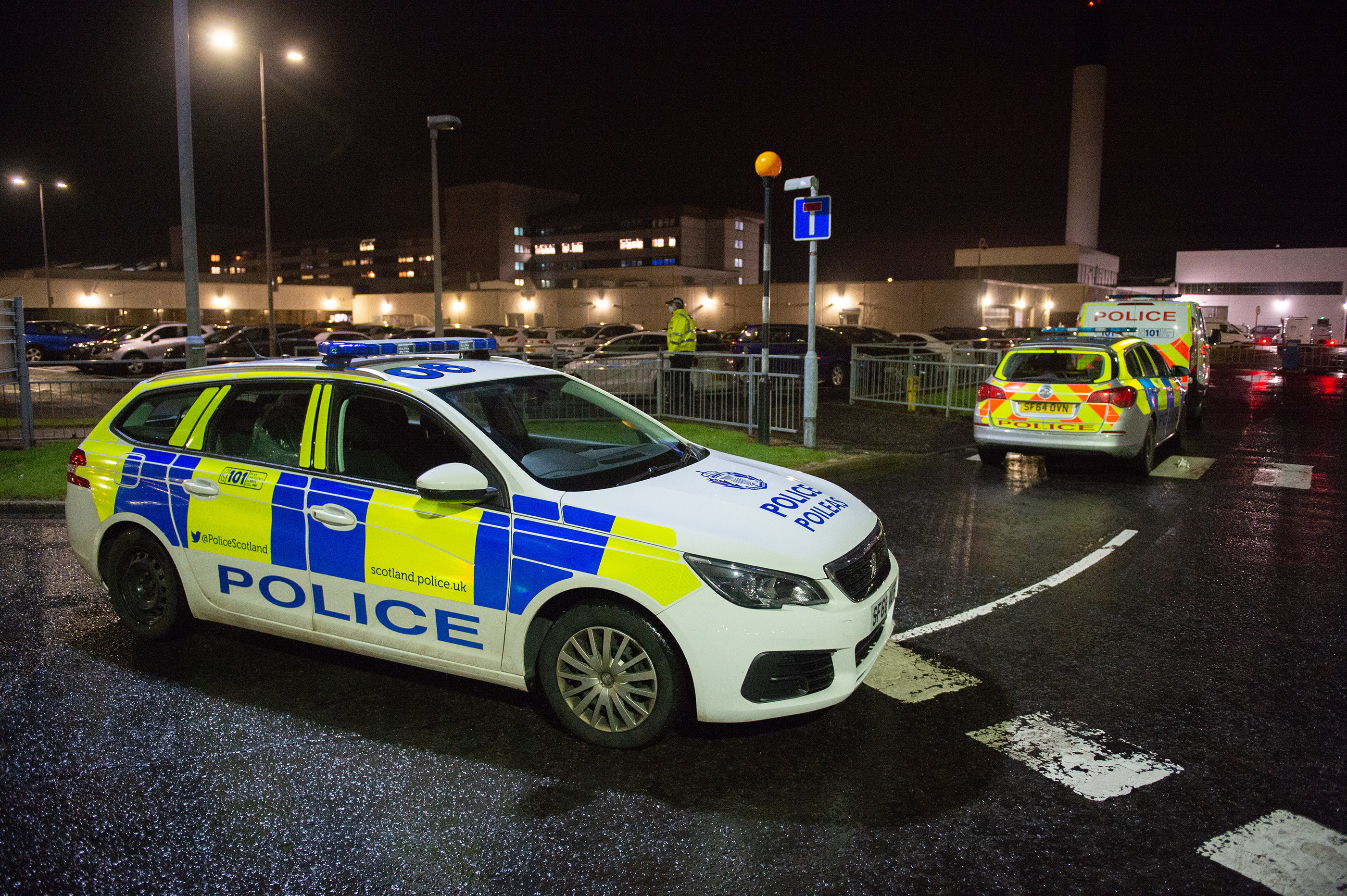 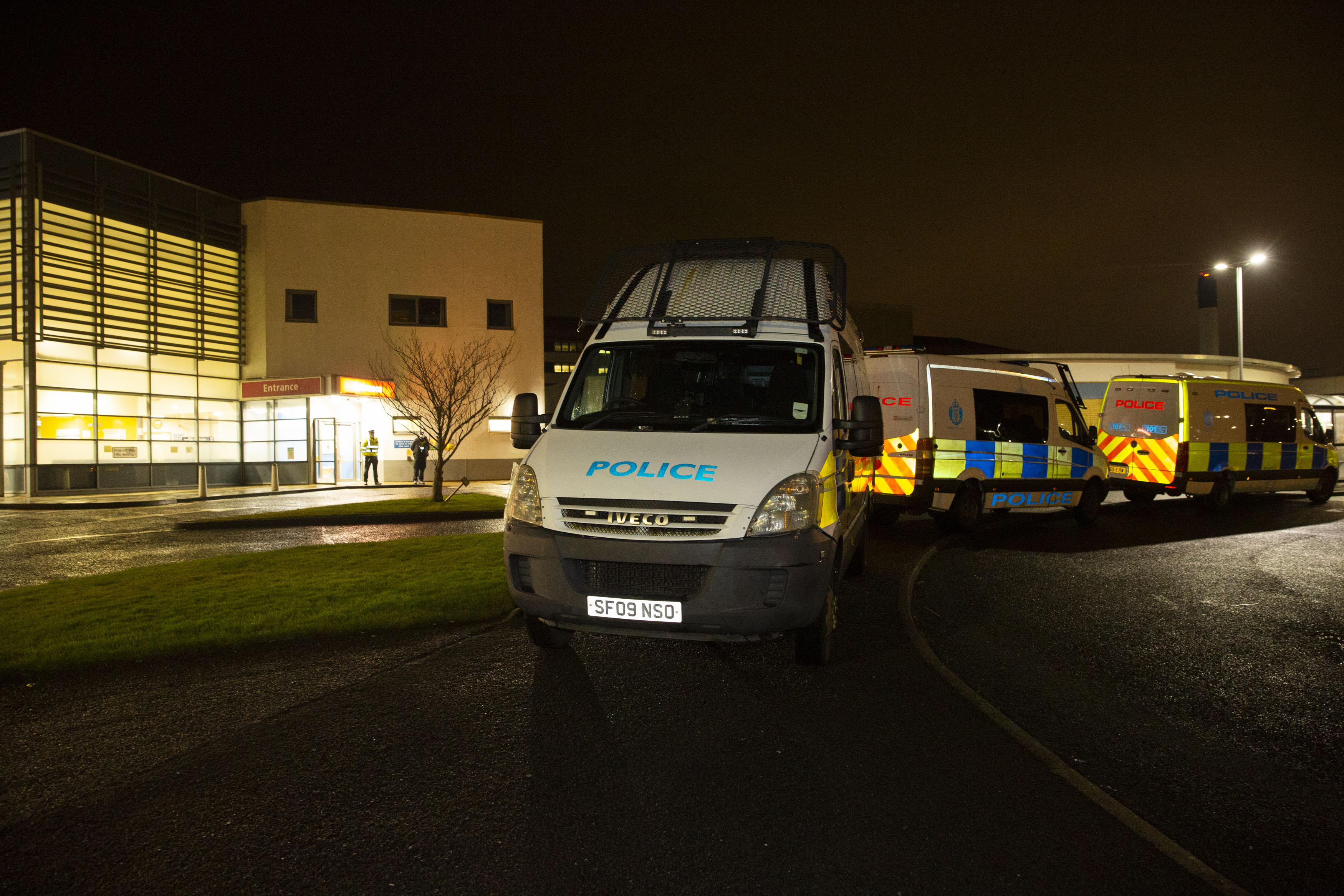 Unconfirmed reports say a female nurse and a second medic were both injured at the hospital.

The extent of their injuries is not known.

Cops said the first happened at 7.45pm outside the hospital, the second about 20 minutes later on Portland Street and the third was a serious road crash on the A76 at about 8.30pm.

Police have confirmed these incidents are not being treated as terror-related.

Local journalist Alex Tiffin said he had been told by a police source that the events in Kilmarnock were linked to a “domestic incident on a horrific scale you thankfully rarely hear of.”

Crosshouse Hospital was under lockdown for about three hours while ambulances were diverted from the area. 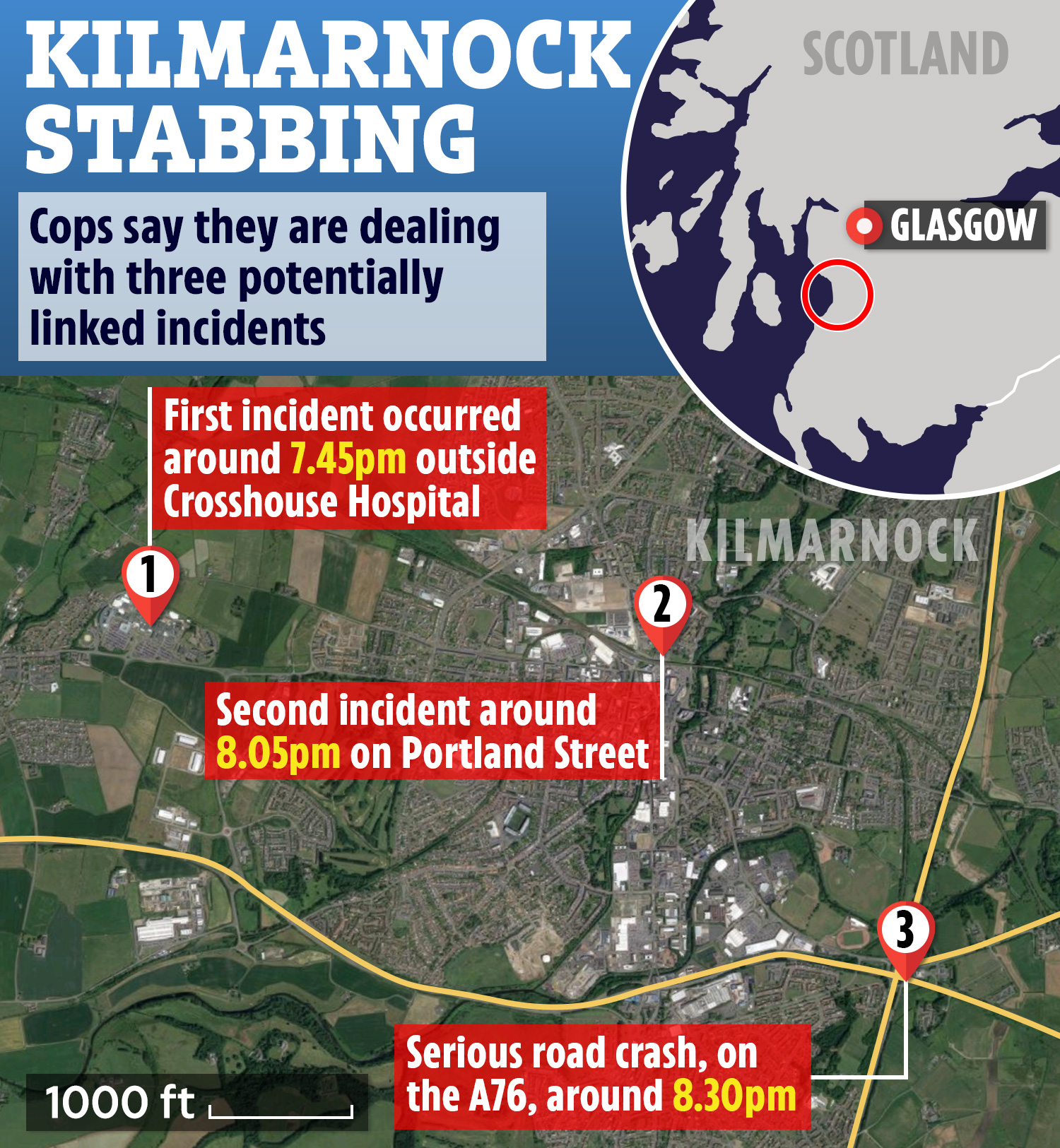 Cops were seen running on foot through the town centre as they responded to the serious incidents.

An onlooker described a “very tense atmosphere” as cops locked down an area around the viaduct.

At Portland Street, officers were seen comforting a distraught woman at the scene and later took her away in a police car.

Locals also claimed a man was injured at the scene of this incident.

Detectives erected a cordon, inside which a white Mitsubishi vehicle could be seen under an arch with its hazard lights flashing.

A local, who asked not to be named, said: “This is horrific, it’s carnage.

“The police are everywhere and the whole area is lockdown. It’s obviously very serious.” 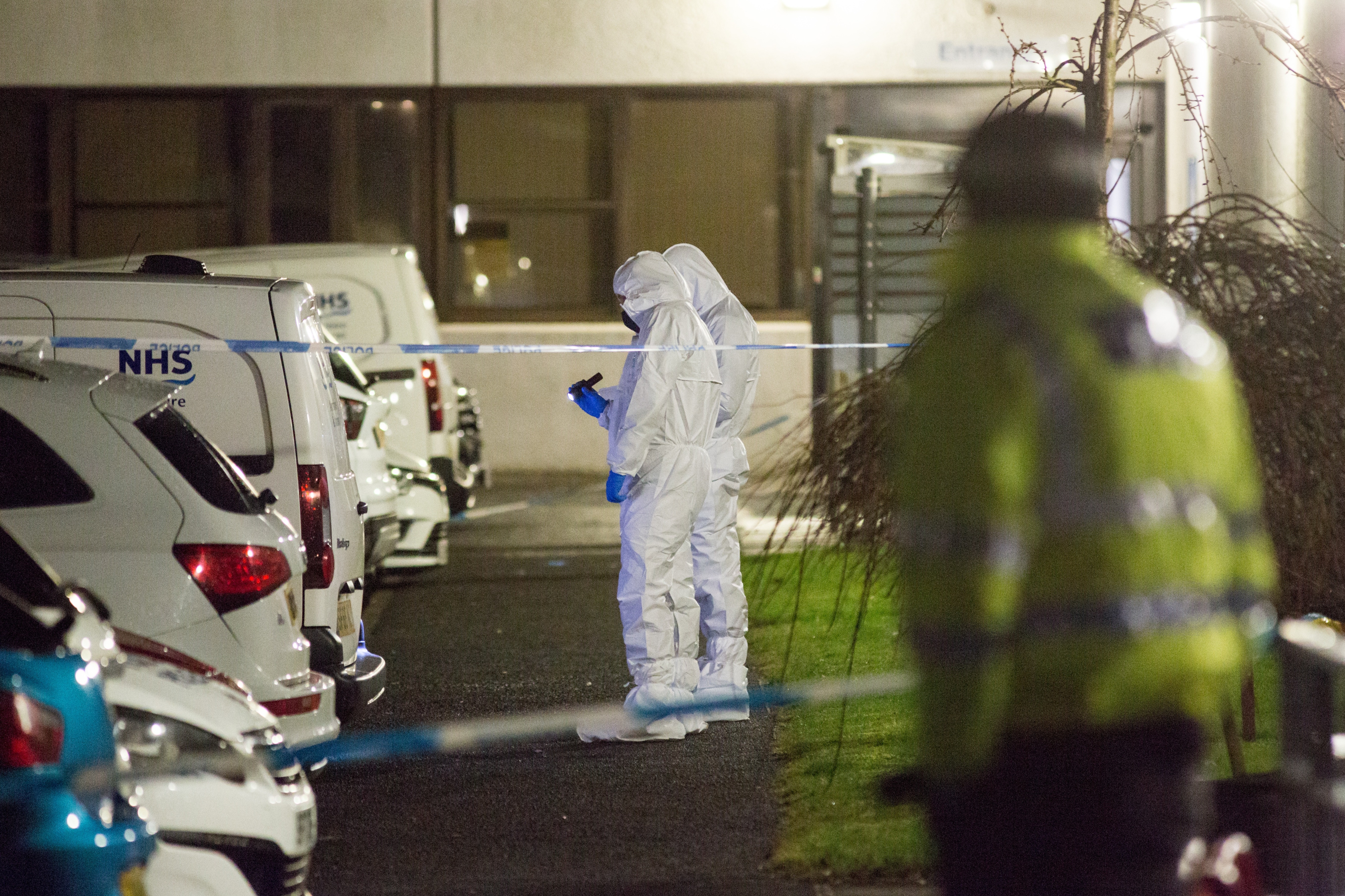 Forensics workers investigate the scene of a stabbing in KilmarnockCredit: Getty Images – Getty 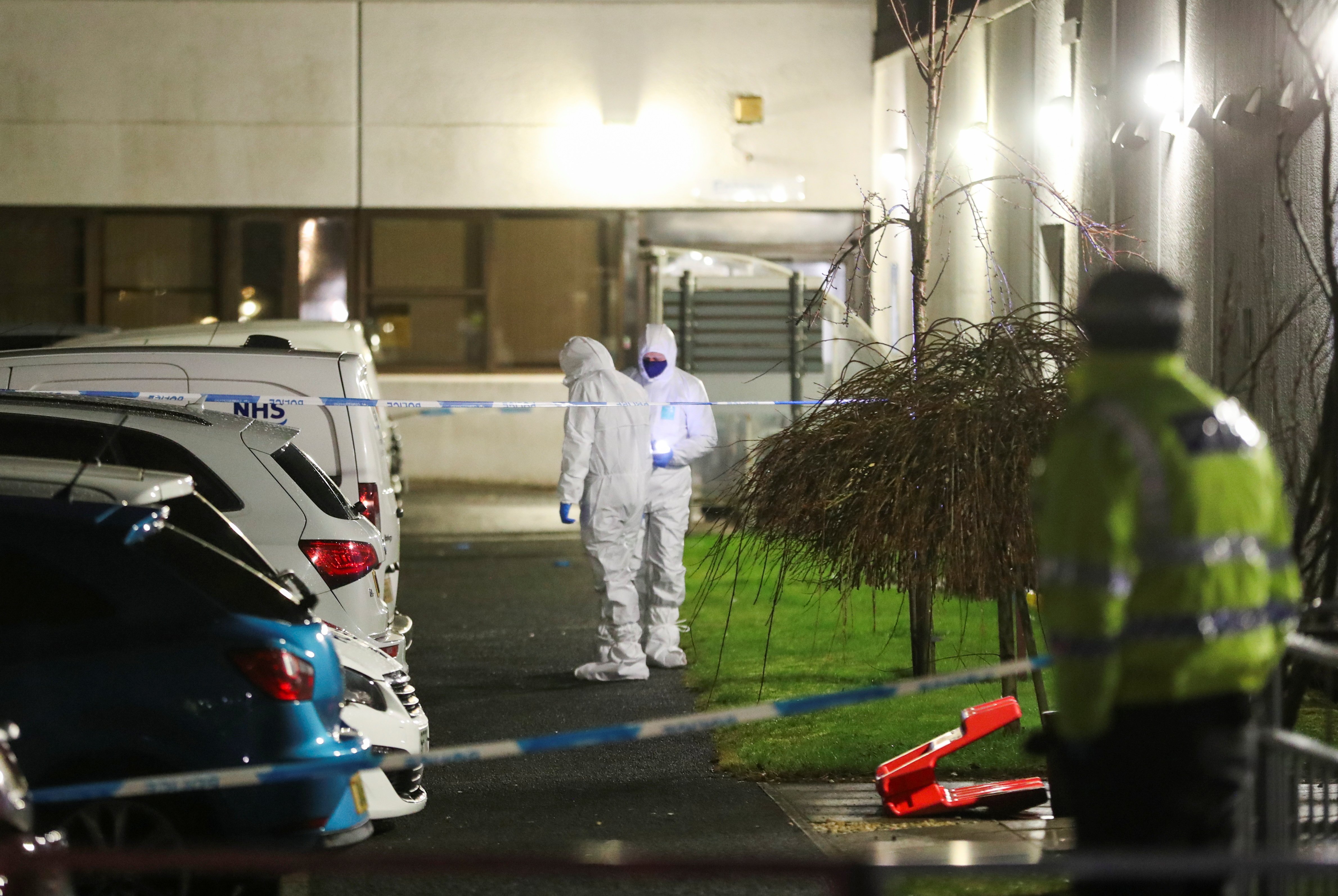 Forensics officers at the scene at Crosshouse HospitalCredit: Reuters

Nicola Sturgeon tweeted last night: “My thoughts are with those involved in these very serious incidents in Crosshouse/Kilmarnock.

“Please help @AyrshirePolice do their job by following the advice to stay away from the areas affected.”

One eyewitness told the Daily Record earlier in the evening: “I was picking someone up when a member of medical staff was stabbed. The whole place is on lockdown.

“Armed police are there and they’re sending everyone away from the area.”

Another eyewitness told Ayrshire Live: “There are between 10 and 15 police vans sitting on the edge of the Moorfield Estate which is about half-a-mile away from the hospital.

“It looks like an officer is standing guard outside the A&E department at the hospital.”

A spokesperson for Ayrshire Police said: “Police Scotland is currently dealing with 3 potentially linked incidents in the Kilmarnock area.

“The first occurred around 7.45pm outside Crosshouse Hospital, the second around 20 minutes later on Portland Street, and the third, a serious road crash, on the A76, around 8.30pm.

“Enquiries into these incidents are at an early stage and these areas have been cordoned off at this time. There is no cause for concern for the wider community.”

A spokesperson for the hospital has said: “NHS Ayrshire and Arran is aware of an incident in the grounds of University Hospital Crosshouse.

“As a result, the hospital has been placed under lockdown and ambulances diverted to University Hospital Ayr.

“We are assisting Police Scotland with their investigations, and to ensure the safety of staff, patients and visitors.

“As this is a Police Scotland incident, we are unable to comment any further at this time.” 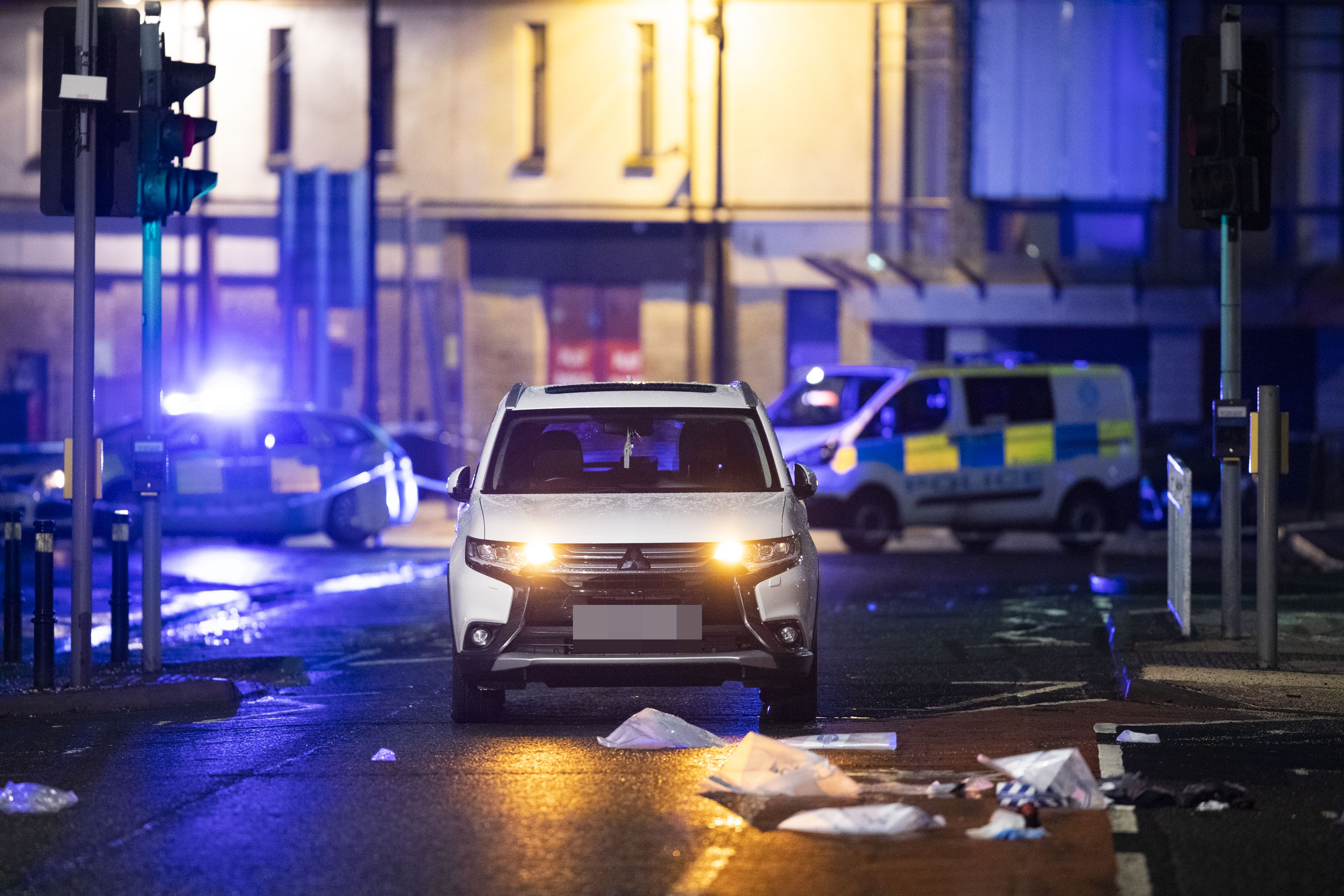 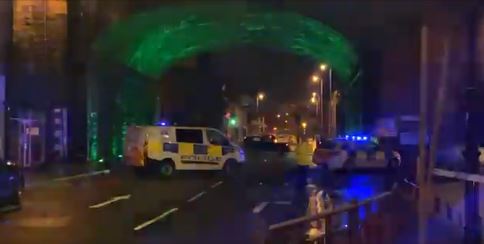 Cops are dealing with an incident at Crosshouse HospitalCredit: Ayrshire Live

Police have said they are dealing with two incidentsCredit: Ayrshire Live