Kent: Two injured after ‘chunks of wall’ fall onto holidaymakers 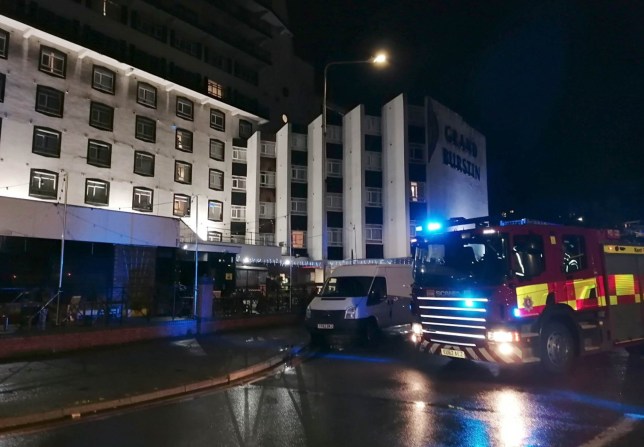 There is currently no access past the Hotel Burstin at the harbour after part of the building fell into the road (Picture: UkNewsinPictures)

Two people have been injured after ‘chunks’ of a one-star hotel wall came crashing down onto the street, it has been reported.

The incident happened outside of the Grand Burstin Hotel in Folkestone, Kent, at around 5pm today.

Pictures shared online show the debris had landed on a Just Go! Holidays coach parked under the seafront building’s iconic sign, near the entrance.

A driver and a visitor to Folkestone were treated for injuries shortly after.

A spokesperson for Just Just Go! Holidays told Kent Online: ‘I can confirm one of its coaches was involved in an incident while parked outside the Burstin Hotel in Folkestone earlier today.

‘Emergency services attended the incident, and we can confirm that our coach driver and one of our customers were taken to hospital. 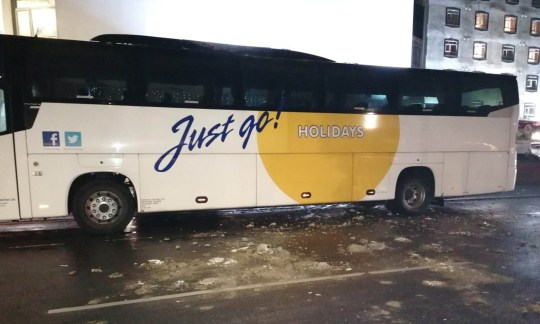 The coach was parked near the entrance of the hotel (Picture: UkNewsinPictures)

‘Our priority at this time is to focus on both those involved and our customers at the hotel and we are offering every assistance possible. No other details are currently available.’

It is still unclear what caused parts of the building to crumble on the ground.

Police, paramedics and the fire service attended the scene, which was cordoned off for safety reasons.

It comes just two weeks after Britannia Hotels, which owns the Grand Burstin, was rated the worst in the UK for the 10th consecutive year.

The company’s hotels rated just two out of five stars for cleanliness, bed comfort and value for money in the annual survey by consumer group Which?.