The Wikileaks has never stepped outside in public with his fiancée and two sons (Picture: Reuters)

Julian Assange’s fiancée plans to marry him in prison soon, even with the threat of life in a US jail still hanging over him.

Stella Morris got engaged to Wikileaks founder in 2015 while he was holed up in the Ecuadorian embassy.

The 50-year-old is facing a range of serious charges in the US over the publication of leaked documents and is fighting extradition.

In 2019, he was arrested for breaching bail conditions imposed by a UK court while facing sexual assault allegations in Sweden.

Fearing he would be sent to the US if he was extradited to Sweden, Mr Assange – who strenuously denied the claims – skipped bail to take refuge in the Ecuadorian embassy, where his relationship with Ms Morris blossomed.

He has been held in Belmarsh prison ever since, a high security facility.

As reported by Metro.co.uk yesterday, he rubs shoulders with some of the most dangerous criminals in the UK justice system.

Ms Morris revealed their determination to marry in prison, the effect years of legal troubles have had on their children and opened up on how they were able to live like a ‘normal couple’ in the confines of the Ecuadorian embassy

They were granted permission to get married inside Belmarsh in late 2021 but are still in negotiations over how it will happen in practice. 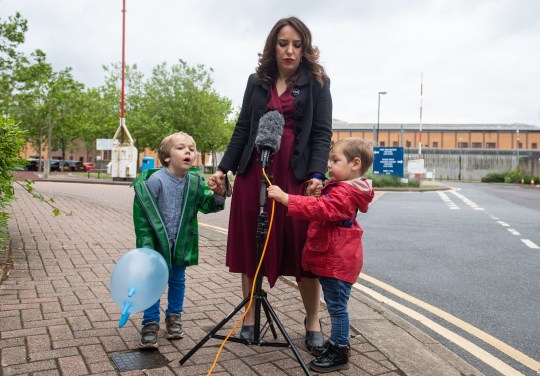 Stella says she is helping Gabriel and Max come to terms with the situation their father is in (Picture: PA)

She told Metro.co.uk: ‘Well, it’s not straightforward and then there are factors like Covid…there’s an outbreak in Belmarsh so they’re in a semi-lockdown.

‘We want some immediate family and friends to be able to be there so there’s those kinds of factors.

‘We haven’t set a date just yet because we’re kind of in conversations with the Belmarsh authorities about when they’ll allow the ceremony to take place and with how many people and so on.

‘But it will be in the next few months, I can’t say exactly when but you know, it’s going to happen before the summer for sure.’

Asked if she was excited at the prospect, Ms Morris said: ‘Yes, I mean, that’s something nice to be working towards.

She revealed ‘it’s been in the works for years and years’, saying they attempted to get married in the Ecuadorian embassy but ‘the relationship with the Ecuadorian government deteriorated and it wasn’t really viable at the time’. 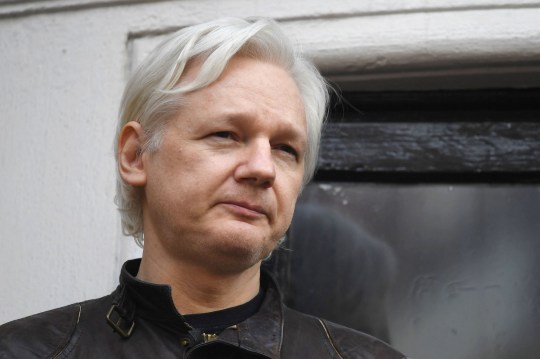 The Wikileaks founder has not been free to go out in public since claiming refuge in a London embassy in 2012 (Picture: AFP)

After years of delays, Ms Morris said the pair have ‘just kind of decided to try to take our own initiative and just get married’.

She added: ‘Even if it’s in Belmarsh it will be special, it’s not about the venue really, it’s about the moment.’

The pair first met in 2011 and got engaged in secret in 2015 while Mr Assange was on the run from British police.

She fell pregnant with his children – Gabriel, four, and Max, two – who have only known life with their father in prison trapped inside.

Ms Morris said: ‘The youngest child is too young to really understand…the oldest understands what I tell him, which is that his father wants to come home, and they speak over the phone.

‘I try to show him how abnormal it is that Julian’s not home rather than normalise the current situation but all he’s ever known or all he can remember is his father in Belmarsh.’ 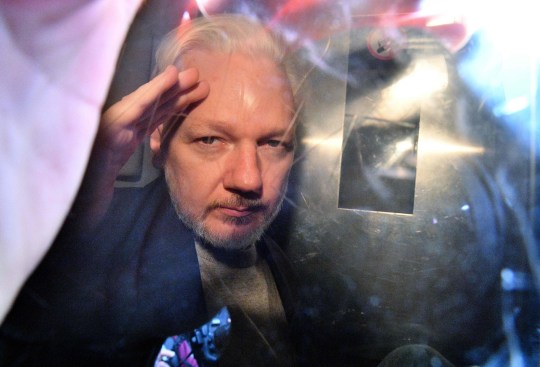 The Wikileaks founder has only been seen in public in recent years while in the back of a van being taken to court (Picture: AFP)

After Ms Morris gave birth to their oldest child, she would pass him off as the son of a friend during visits to the embassy because they were afraid for their safety.

Speaking about their relationship, she said: ‘People might think it’s too bizarre to really understand that this is actually real…in some ways, we’re just a normal couple, we do normal couple things.

‘When we were able to be together in the embassy, we would cook together and have movie nights and have romantic dinners and just hang out with friends and stuff.

‘But then there’s this other layer which is in circumstances of extreme danger and threat and being in the middle of a diplomatic and political confrontation – we were at the centre, we started a family in the middle of it. 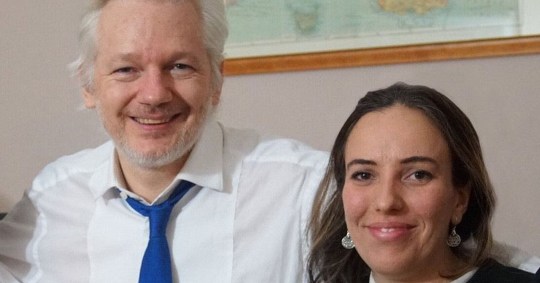 The couple have been granted permission to marry in Belmarsh but a date is yet to be set (Picture: PA)

‘We actually started a family before things got frightening – we decided to when Julian had just won his case at the UN that said he was arbitrarily detained…there were no US charges at the time.

‘So it just seemed like a matter of time before Julian was free…we decided to start a family, and then things just got really, really frightening, to the extent that I feared for Julian’s life, I feared for my own safety and that hasn’t changed.’

Metro.co.uk revealed yesterday how Ms Morris fears for the safety of her fiancé while he awaits extradition hearings in Belmarsh prison.

The 50-year-old has been incarcerated in the same facility as notorious killers like Wayne Couzens and Stephen Port, along with a host of other high-profile criminals and terrorists reportedly locked up on the prison’s high security wings.

How Julian Assange ended up in Belmarsh

Until 2010, few had heard of Australian publisher Julian Assange or his website, Wikileaks.

The Australian had already been running the website for four years when it published a trove of material which sent shockwaves through the worlds of diplomacy, intelligence and journalism.

Now, 12 years later, it is easy to forget the fallout continues with no clear end in sight – and he remains a highly divisive figure.

Mr Assange – now 50 – came to global attention when, with the help of newspapers like the New York Times and the Guardian, he published top secret documents relating to the wars in Iraq and Afghanistan.

Among them was a video dubbed ‘Collateral Murder’, shocking footage taken from a US helicopter which had shot dead innocent people.

He later published documents obtained by Chelsea Manning, a US Army soldier, detailing abuses during the campaigns.

Authorities in the US began to pursue Mr Assange but his story became far more complicated when allegations of sexual assault emerged in Sweden.

Two women made serious claims dating back to August 2010 – one alleging rape, the other ‘molestation’ – which Mr Assange strenuosly denied.

He refused to go to Sweden to face questioning because he said the case would be used as a pretext to extradite him to the US where he could face charges carrying huge sentences for Wikileaks’ activities.

Mr Assange was detained in the UK and bailed. After a long legal battle, in 2012 he took up refuge in the Ecuadorian embassy in London to avoid being forcibly sent to Sweden.

At the time, the Ecuadorian government was supportive of Wikileaks’ actions and he even became a citizen.

Because so much time had elapsed in the Swedish cases, they were dropped – but Mr Assange was still facing arrest because he broke the law by breaching bail conditions when he entered the embassy.

Wikileaks continued its activities with him inside. Among many more tranches, it published leaked emails from Hilary Clinton’s computer and documents from the Democratic Party’s HQ which were hugely damaging.

The development prompted then-candidate Donald Trump to say he ‘loved’ Wikileaks. The website became central to US investigations into Russian interference in the election.

Relations with the Ecuadorians broke down after a change in government and Met officers were invited into the embassy to forcibly remove him.

He has completed his sentence for breaching bail conditions but is being kept in Belmarsh pending an extradition decision because he is a ‘flight risk’.

An earlier decision by a UK to block extradition because it could expose Mr Assange to the risk of suicide was overturned after the US provided ‘assurances’ over the conditions he would be held in.

This week, his lawyers won a case which opens up the possibility of him taking his case to the UK Supreme Court where he will hope to beat the extradition charges for good.