Jonathan Van-Tam misses ceremony to get knighthood after catching Covid

A familiar sight during the first years of the pandemic (Picture: Reuters)

Jonathan Van-Tam had to miss the ceremony marking his knighthood after he caught Covid-19.

The professor became a famous face after the pandemic began, regularly appearing at government briefings about the spread of the virus.

He was given a knighthood in the New Year Honours list for his services to public health.

But the formal ceremony will have to be rescheduled for when he’s no longer contagious.

He was supposed to receive his knighthood from the Duke of Cambridge at an investiture ceremony at Windsor Castle yesterday.

Sir Jonathan, now Pro-Vice-Chancellor for the Faculty of Medicine & Health Sciences at the University of Nottingham, will instead collect his gong at a later date.

A spokesperson for his university said that Prof Sir Jonathan was isolating at home and is ‘almost completely recovered’. 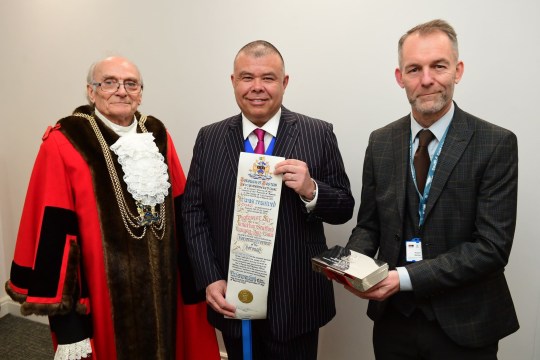 Sir Jonathan Van-Tam being honoured with Freedom of the Borough in Boston in March (Picture: Boston Borough Council)

‘He is fully vaccinated, is continuing to work whilst isolating at home and is almost completely recovered.

‘He is very disappointed not to have attended his investiture yesterday as was planned, however it will be rescheduled and he is very much looking forward to receiving his Knighthood for services to public health.

‘This is a timely reminder that no matter how vigilant we remain, the risk of infection from Covid-19 remains present and can affect anyone.

‘We should all continue to take reasonable steps to protect ourselves including getting fully vaccinated.’

Sir Jonathan served as the deputy chief medical officer for England 2017 and March this year.

He helped steer the nation through the Covid-19 crisis and became a popular face behind the Downing Street press conference podium, alongside Sir Chris Whitty.