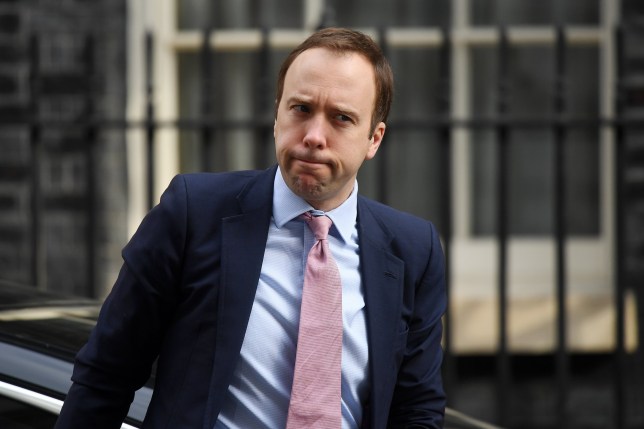 It wouldn’t be the first time a man had struggled to locate a specific part of the female anatomy (Picture: Peter Summers/Getty Images)

It’s been an awkward week for Matt Hancock.

Last Friday, it was ruled that he broke the law by failing to publish billions of pounds worth of Covid-19 contracts within 30 days, and on Wednesday he defied the laws of physics in a public cervix announcement that turned into a smear campaign against himself.

‘Over 31,000 women will be offered kits to carry out smear tests in the privacy & convenience of their own homes in a trial’, he tweeted, ‘Cervical screening is life-saving, so this is a great step forward’.

While the latter statement is certainly true, it didn’t take long for the women of Twitter to point out that the former was, in fact, an impossibility.

Presuming the kits don’t include a speculum, examination light and set of stirrups (unless, of course, Matt’s department has handed out another contract to a WhatsApp buddy) or a letterbox-sized medical professional, then they’re not smear tests.

What the kit actually provides is self-sampling swabs for the detection of the Human papillomavirus, or HPV, in the vagina, not the cervix.

Same genitalia, different component – but it wouldn’t be the first time a man had struggled to locate a specific part of the female anatomy.

I suppose you can’t blame Matt Hancock for not knowing what a smear test is. He’s only the Health Secretary after all, and cervical smears affect an insignificant 50.61% of the population.

Yet when women on Twitter explained that you could only perform your own smear if you were blessed with the body type of either a contortionist or Mr Tickle, Hancock said nothing.

If he cared so much about progression in the world of women’s health, perhaps it would be right for him to acknowledge his mistake and apologise for making such a clumsy error. That wouldn’t be on brand for him though, would it.

Thank god for organisations like Jo’s Cervical Cancer Trust who stepped in to allay the concerns of female observers, myself included, who were left baffled by the questionable details of his announcement.

Providing a link to their website, they explained that ‘self-sampling tests are actually completely different from the cervical screening test you would have at the GP… they involve a simple swab, which collects a sample from the vagina, not the cervix.

‘The sample is tested for HPV, the virus which causes almost all cervical cancers, this means if you do not have HPV your risk of cervical cancer is very low’.

HPV swabs serve only as early indicators of an issue, not as a replacement for a standard smear test, so clinic appointments will still be necessary

Hop over to the NHS England website, however, and you’ll see that they also use the term ‘smear test’ to describe the vaginal HPV swab, which makes me wonder whether this was, in fact, a Hancock-up, or whether there has been a deliberate attempt to re-brand what a smear test actually is.

By conflating ‘cervical smear test’ with ‘vaginal HPV swab’, I can’t help but feel as though NHS England are perpetuating the idea that the intricacies of women’s genital health can be lumped under one umbrella term.

How often do we hear stories of women complaining about symptoms they know are not normal, only to be palmed off by GPs insisting it’s just ‘women’s problems’.

The generalisation of women’s health is a metaphorical disease in and of itself, and we must treat the cause – not just the symptoms – if we are to cure it.

Sexual health is so often shrouded in shame and embarrassment, and NHS England rightly acknowledges that this can be a key underlying reason for women not attending smear test appointments, alongside cultural barriers and fears about what the test involves.

But to simply offer an ‘at home’ service, without fully explaining that the procedure is not a real smear test, seems like a step backwards to me.

I’ve had plenty of smear tests in my time. When my first results came back positive for pre-cancerous cells I collapsed into a grief-stricken heap. I didn’t know what cervical intraepithelial neoplasia (CIN) was, but I knew that cancer was bad (even if it was pre-cancer) so I sobbed uncontrollably to my girlfriends who were equally distraught by the news.

Luckily one of my friends was a little bit older and had received a similar letter years earlier. She acknowledged that it was shitty news to receive, but reassured me that it was nothing to worry about and that as long as I followed the instructions in the letter, all would be well.

I attended my invitation to a colposcopy where a biopsy of my cervix was taken, and the cancerous cells were removed.

It wasn’t the most fun I’ve had with my legs akimbo, but it wasn’t anything to be afraid of either. I’ve since had regular check-ups to make sure the CIN or HPV had not returned and, for now, they haven’t.

My fear, panic and distress were understandable, but unnecessary. My emotions were symptomatic of the misunderstandings and confusion that surround female medicine, which is why I feel so strongly about Matt Hancock’s tweet and the misleading language used on the NHS website.

I applaud the introduction of at-home HPV testing, and I hope that one day the trial will be rolled out nationwide. By advertising the convenience of at-home testing, they will attract the attention of women who may struggle to find time to book in-person appointments – which is a good thing.

But HPV swabs serve only as early indicators of an issue, not as a replacement for a standard smear test, so clinic appointments will still be necessary.

If the NHS want to engage with women and people with cervixes over their genital health, then I believe honesty and transparency to be the best policy. By misleading us into thinking home-test swabs are smear-tests, the NHS risks losing the trust of the very women they are trying to encourage to get tested.