As you come in to land at Skellefteå airport in the far north of Sweden, you are greeted by a wooden air traffic control tower poking up from an endless forest of pine and spruce. After boarding a biogas bus into town, you glide past wooden apartment blocks and wooden schools, cross a wooden road bridge and pass a wooden multistorey car park, before finally reaching the centre, now home to one of the tallest new wooden buildings in the world.

“We are not the wood Taliban,” says Bo Wikström, from Skellefteå’s tourism agency, as he leads a group of visitors on a “wood safari” of its buildings. “Other materials are allowed.” But why build in anything else – when you’re surrounded by 480,000 hectares of forest?

If you are wondering what a climate-conscious future looks like, small subarctic Skellefteå (pronounced “she left you”) has some of the answers. In a clearing on its outskirts, Europe’s largest battery factory is currently under construction. The next generation of electric vehicle batteries will not only be produced here, but recycled too. Electric helicopters will soon be able to shuttle visitors to the gargantuan Northvolt gigafactory, while longer-distance electric aeroplanes are being tested nearby.

Skellefteå runs on 100% renewable energy from hydropower and wind, and recycles 120,000 tonnes of electronic waste a year, with excess heat from the process fed back into the city-wide heating system. And now, nosing 20 storeys above the low-rise skyline, Skellefteå has a fitting monument to its carbon-cutting credentials. The Sara Cultural Centre and its towering Wood Hotel stand as beacons of what it is possible to do with timber – and store about 9,000 tonnes of carbon from the atmosphere in the process.

“When I saw the competition proposal, I didn’t think it would be possible to build,” says the mayor, Lorents Burman. “Twenty floors high in wood? In Skellefteå?” Thanks to three teams of structural engineers, and the region’s prefabrication expertise, the timber tower now stands as a blueprint for a new generation of “plyscrapers”.

The technology behind it is surprisingly simple. The two main materials are glued laminated timber (glulam) and cross-laminated timber (CLT). The former is made from layers of lumber bonded together, with the grain running in the same direction, giving it a higher load-bearing capacity than both steel and concrete, relative to its weight. It is ideal for columns and beams, and forms the structural bones of the cultural centre, which is home to two theatres, a museum, an art gallery and a library.

CLT, meanwhile, is like super-sized plywood, with each layer stuck at right-angles to the next. This makes it strong in all directions, so it is perfect for walls and floor slabs. The lift cores at either end of the 20-storey tower are made from CLT, with prefabricated hotel room pods stacked between them, incorporating glulam columns in their corners for strength. Finally, the double-skin glass facade keeps the rooms insulated in winter and cool in summer, as the warmed air rises between the panes of glass.

The “self-finish” nature of structural mass timber, which can simply be left exposed, means that the tower was incredibly quick to build, doing away with the usual wet trades of plastering and decorating. A whole year was saved by using wood, compared with steel and concrete, with a storey completed every two days. The number of truck deliveries was also reduced by about 90%, with practically zero waste on site. Like bits of a giant balsa-wood model, the pieces came from factories ready to be bolted together, some in panels 27 metres long, while the trees were harvested from within a 60km radius of the site – and have all since been replenished. Just like the region’s forest-foraged restaurant menus, this is meaningful local sourcing rather than a green veneer. 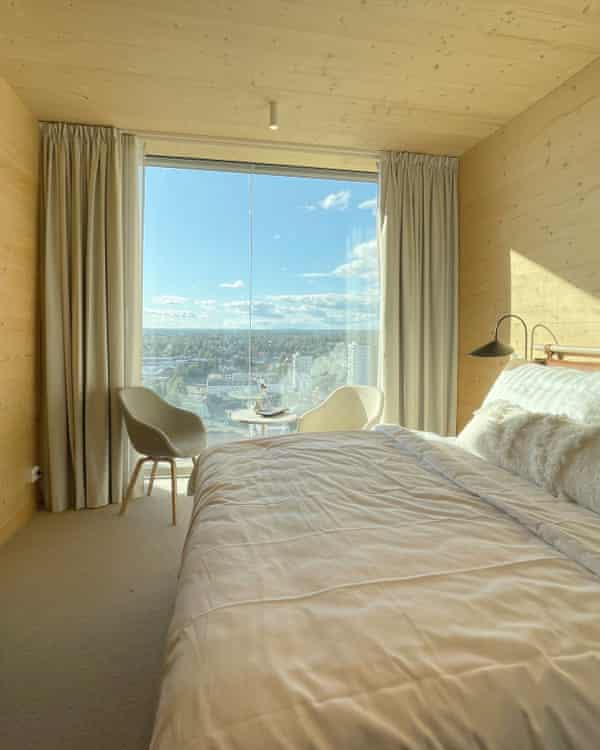 Tree topped … one of the hotel rooms. Photograph: Oliver Wainwright

The climate isn’t the only beneficiary. Building in wood seems to have a positive effect on construction workers. While a normal building site is a noisy, toxic place of fumes and dust, a timber one is a picture of serenity. “The people building this would never go back to steel and concrete,” says Jesper Åkerlund from contractor Holmen, which is analysing improvements to its workforce’s mental health following the project. There’s one downside, though, at least from the hotel perspective: “The raw wooden walls absorb stains like red wine much faster than a painted wall,” says Sara Johansson, from the Elite hotel group, “so we have to be ready to clean much faster!”

With all these exposed timber walls, ceilings and floors, the place feels like a gigantic sauna – with the aroma to match. But look closely and you’ll see it’s not all wood. Big steel plates are bolted through the giant plywood walls on the fifth floor, revealing the presence of a big steel truss – used to transfer the weight of the tower to the walls of the cultural centre, making it possible to have a column-free space below. Concrete is also used on the top two floors, to stop the tower from swaying too much in the wind.

“We wanted the building to be legible,” says Oskar Norelius of White Arkitekter, the biggest architecture practice in Scandinavia, with years of experience building in wood, “so people can see how it goes together.” Accordingly, thin steel rods form a cat’s cradle of bracings in the trusses above the main open level of the cultural centre, strung between chunky blocks of wood. The main auditorium, with seating for 1,200, is a tour de force of timber, with vast glulam beams leaping across the ceiling and faceted wooden wedges acting as acoustic diffusers around the walls. “There is a softness to the whole place,” says Fransesca Quartey, director of the Västerbotten regional theatre. “It just makes you feel happy.”

It’s fire-safe, too. CLT is very slow to ignite, designed here with an additional 4cm sacrificial layer on each side that would char in the event of a fire, protecting the structure for 120 minutes. The surfaces have also been treated with fire retardant, and the complex is fully sprinklered, powered by batteries rather than the usual diesel engine. 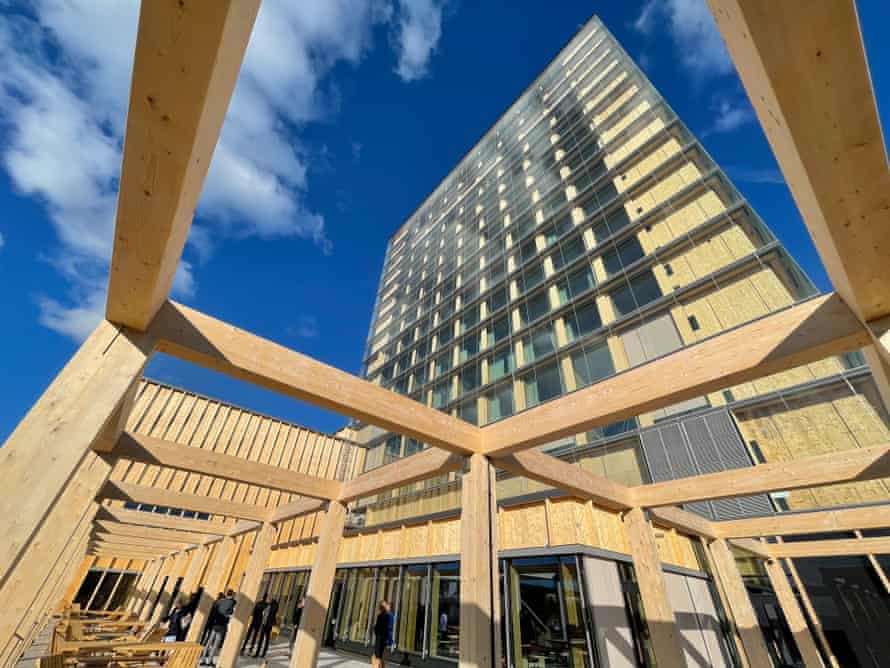 ‘Many buildings now have a brain – but we have added ears’ … the centre and hotel from ground level. Photograph: Oliver Wainwright

In keeping with the city’s advanced (and municipally owned) energy network, the building uses artificial intelligence to monitor energy use and predict heating needs, as well as communicate with surrounding buildings. Excess energy produced by the building’s solar panels can be sent to the nearby travel centre, for example, or saved in batteries in the basement. If the cultural centre needs more heat, the surplus from a neighbouring building being cooled can be transferred over. “Many buildings now have a brain,” says Patrik Sundberg of Skellefteå Kraft, the city’s energy company. “But we have added ears. It will be listening and learning all the time.”

This wooden wonder might seem like a novelty one-off, a trophy to showcase the local timber industry, only feasible because of the location. But the architects are keen to emphasise that the same process could be replicated anywhere, many hundreds of miles from a forest. “We are currently studying how far we could transport this building without undoing the carbon saving,” says White Arkitekter’s Robert Schmitz. “We think it could probably go twice around the world and still be carbon neutral.”

There remain plenty of barriers in the way: the lobbying power of concrete manufacturers, an insurance industry averse to innovation, retrograde building regulations and a construction culture reluctant to change. But as the only truly sustainable building material – with benefits in speed, health and wellness beyond the carbon saving – the future is wood. 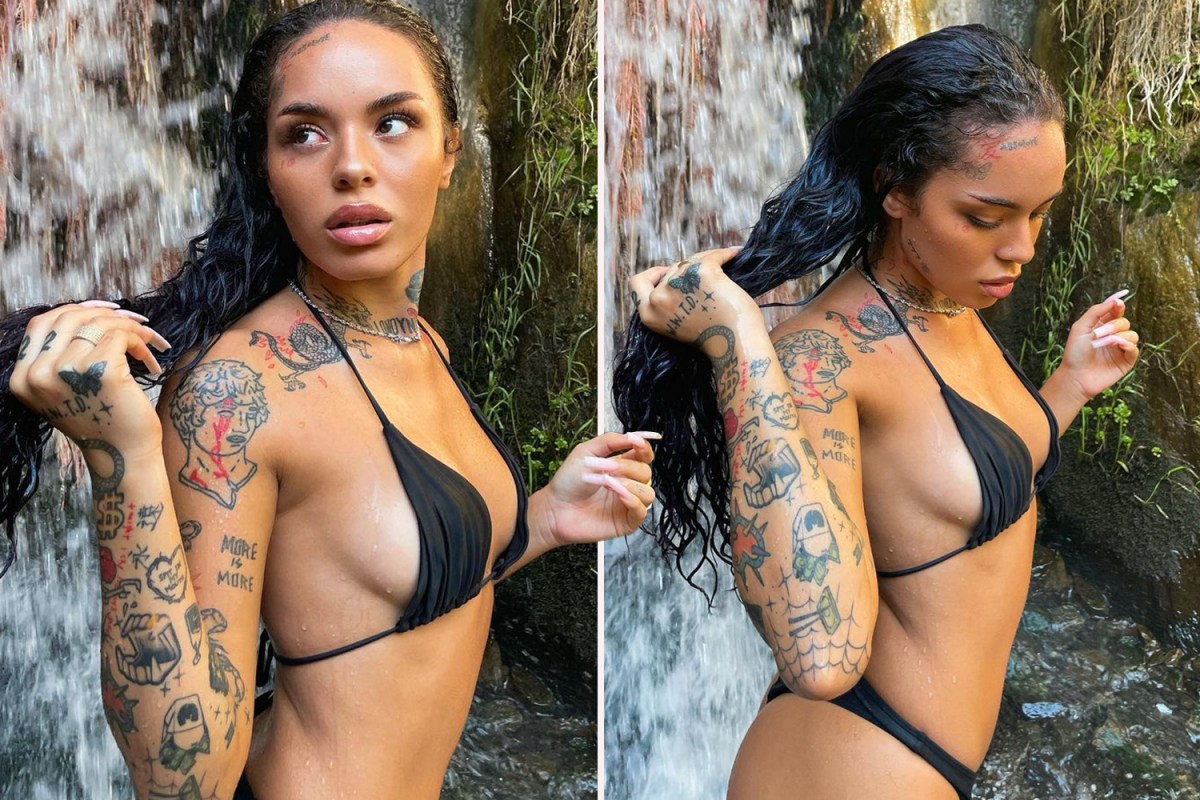 Leave no trace: how a teenage hacker lost himself online | Hacking 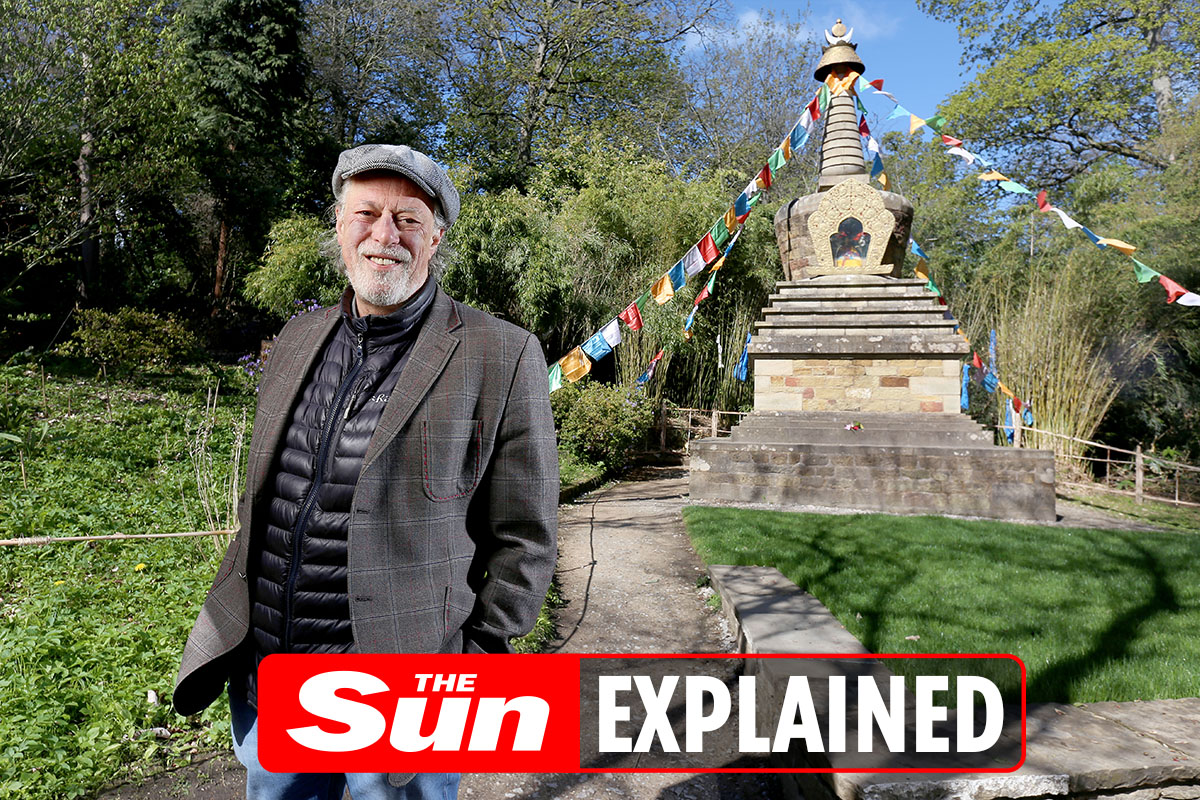 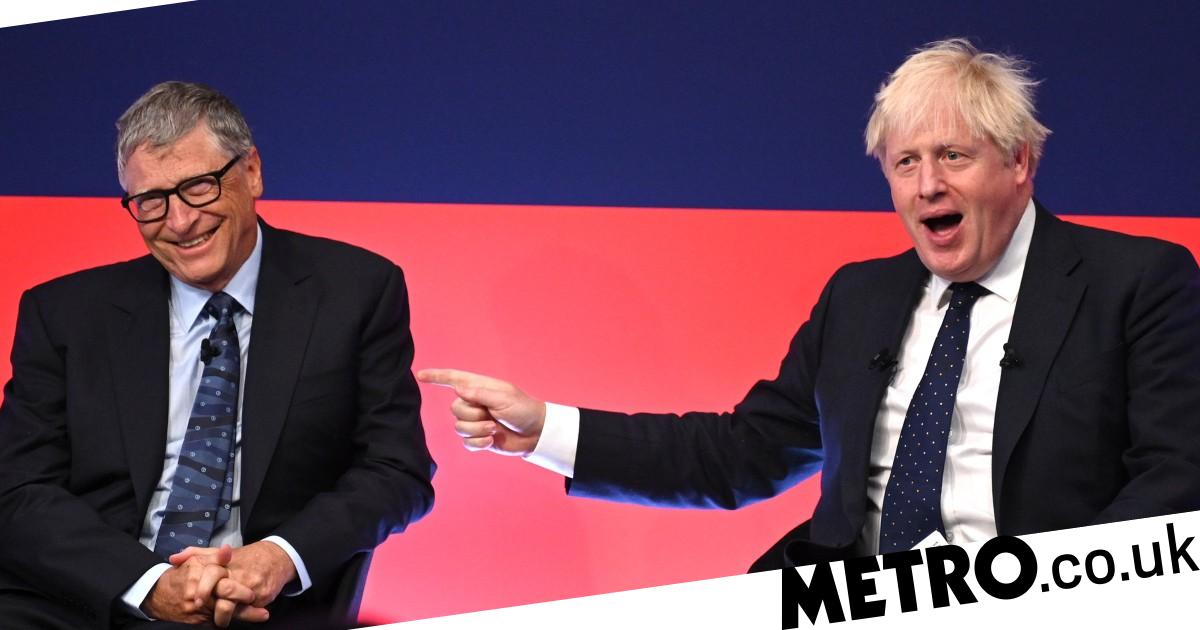 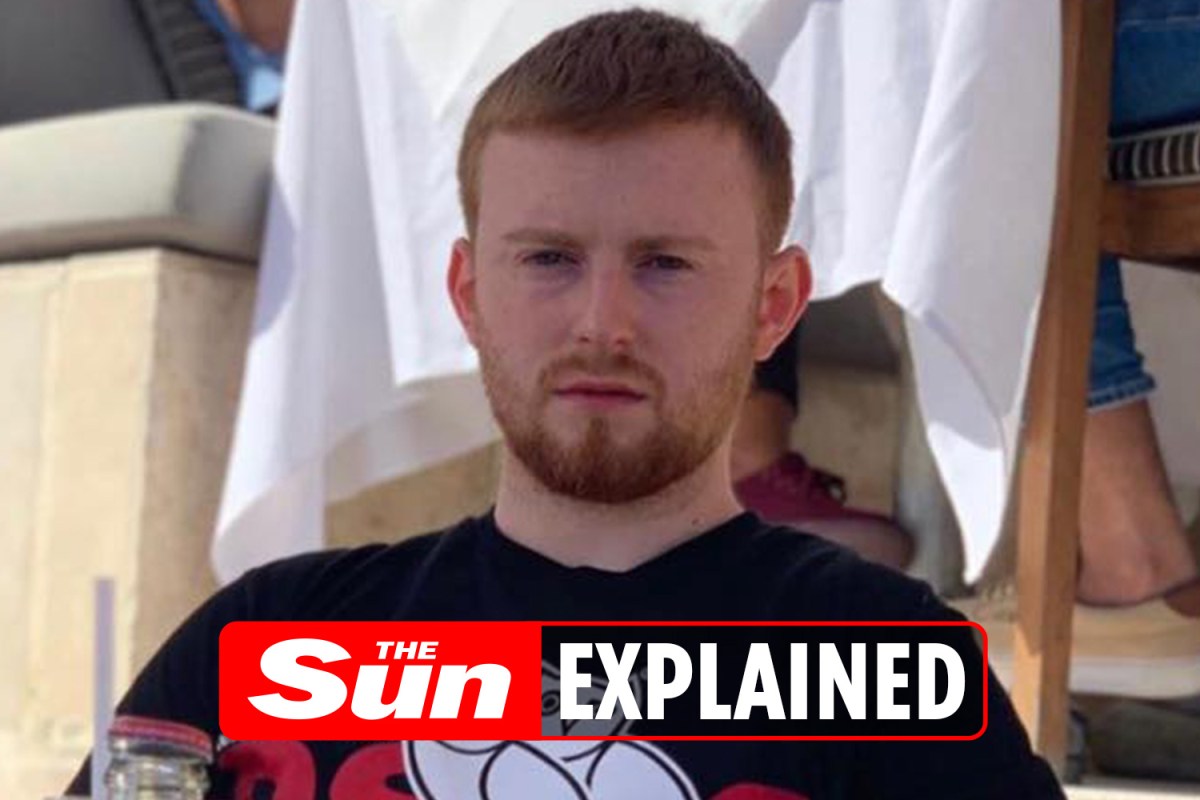