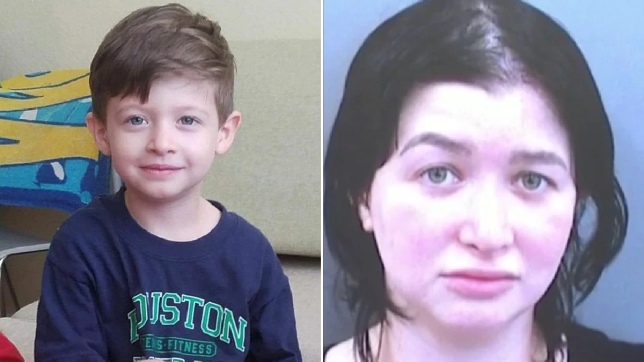 Jason Xavier Sanchez-Marks died of an apparent overdose on June 27, according to KTRK. Prosecutors accuse Ashley of giving him ‘Chlorpheniramine, Dextromethorphan, and Diphenhydramine with Methamphetamine,” state court documents filed in Harris County, Texas, on Wednesday.

Jason and his younger sister Ariana Sanchez-Marks had been living with their grandfather for about two months and came down with tuberculosis, according to a Texas Child Protective Services report. Ashley gave medication to Jason and he began vomiting, hallucinating and having insomnia, and she later gave him NyQuil, according to the report. Jason died two days later.

‘We believe it’s her scheme to have her son die in her father’s care,’ said Harris County Assistant District Attorney Gilbert Sawtelle, according to KPRC.

Ashley told investigators she was not familiar with how life insurance works, but the opposite was the case, according to Sawtelle.

‘It turns out she is a licensed insurance agent in the state of Texas,’ he said. ‘She specializes in life insurance … That was a big clue that this was not an accidental death.’

Ashley also had a history of deceiving her family for money, prosecutors said, including faking she had cancer to get funds from her father for treatment.

Methamphetamine is a highly addictive stimulant drug, while the chlorpheniramine and diphenhydramine medicines are over-the-counter antihistamines. Dextromethorphan is a cough suppressant. Prosecutor also accuse Ashley of giving her son narcotics.

Ashley appeared in court on Thursday and has been charged with capital murder. A judge denied her bond due to the circumstances and nature of the crime.

Jason was buried in July. His obituary states that he was born in Houston and had just finished first grade with ‘an excellent report card’ and was looking forward to second grade.

‘He was a smart, caring child who loved to play with toy cars and dress up as a cowboy,’ the obituary states. ‘His dream was to work at the rodeo or to be a firefighter.’

The boy loved to play in the park with his sister and go to the zoo and museums to see dinosaur exhibits. He also enjoyed drawing and watching movies with his family every night.

‘Jason was loved by everyone that knew him, and he will be deeply missed,’ the obituary states.