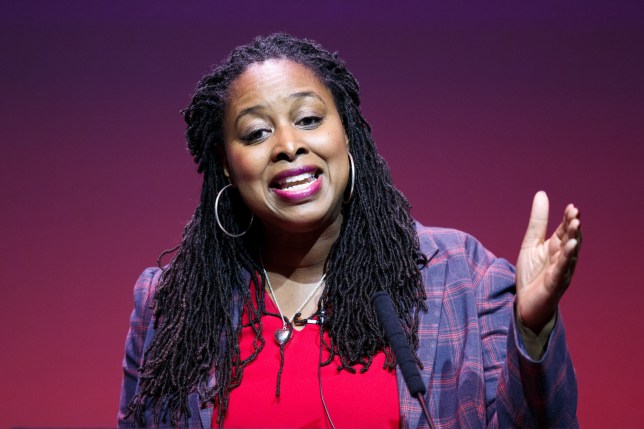 It shocks me and my colleagues in parliament to the core to think a police officer, whose job it is to protect us, has been arrested on suspicion of murder (Picture: Robert Perry/Getty Images)

It is time for those in power to accept that we are in a crisis of violence against women and girls in this country.

The extent of domestic abuse is shocking – a woman is killed every three days on average by a man. As I made clear yesterday in the House of Commons debate on International Women’s Day, we need to get to the root of this crisis urgently.

I know that people will be feeling anxious, worried and upset following the news this week. Like so many others, I am devastated by the awful news about Sarah Everard’s alleged murder and my thoughts are with her family and friends at this terrible time.

This has sadly been the latest in a long line of tragic incidents involving violence against women. It is so upsetting, and I encourage people to reach out to the women in your life who may be suffering abuse.

It shocks me and my colleagues in parliament to the core to think a police officer, whose job it is to protect us, has been arrested on suspicion of murder.

It has led me to make a Freedom of Information request to establish how many police officers have been investigated for domestic violence. I recognise the work of journalist Alexandra Heal on this important issue, who won a Paul Foot Prize for uncovering the shocking stories of how police forces handle domestic abuse complaints against their own officers.

According to Alexandra’s FOI request, police officers and staff across the UK were reported for alleged domestic abuse almost 700 times in the three years up to April 2018. Just 3.9% of police domestic abuse reports in England and Wales ended in a conviction, compared with 6.2% among the general population.

When it comes to the domestic violence crisis, the truth is inequality in society is fuelling the killing of women, and the bullying and silencing of women’s voices should be held to account, because this contributes to the abuse women receive. Unfortunately, at every level of society, men still hold the power – whether it be economically, politically or within the media and judicial system.

One woman is killed every three days, but ask yourself this: what are we really doing about it? It is now time for all those with power to stop being bystanders to this pandemic of violence against women and get involved.

Justice for Women have highlighted the injustices faced by women who kill their abusive partners. Reading some of the harrowing stories make me question why there are so many women charged with murder – as opposed to manslaughter – when there is strong evidence of domestic violence?

For example, Sally Challen killed her husband in 2010, after suffering years of abuse by him. Sally was tried and sentenced for murder but was later freed in 2019 when her murder conviction was quashed and she was instead found guilty of manslaughter.

I believe it is because it is predominately men who are making the judgements and they have an unconscious bias of women being out of line or not knowing their place in society. There have been many deeply concerning examples from our courts.

We know that women have borne the brunt of the work during lockdown – caring, housework, childcare and caring for older relatives. Yet there hasn’t been an increase of women killing men

In the recent case of Anthony Williams – who was sentenced to five years in jail after strangling his wife to death – the Judge Paul Thomas said in his view, Williams’ mental state was ‘severely affected at the time’ as the killing occurred in the early days of lockdown restrictions.

I simply don’t understand the leniency of the sentence. Many people’s mental health has been affected during lockdown but it should not excuse violence.

We know that women have borne the brunt of the work during lockdown – caring, housework, childcare and caring for older relatives. Yet there hasn’t been an increase of women killing men. What we need now is more men tackling male violence against women.

And in a separate case in 2019, when considering a case relating to a man having sex with his wife who had learning difficulties – Judge Hayden said in court: ‘I cannot think of any more obviously fundamental human right than the right of a man to have sex with his wife.’

While Lord Chief Justice Burnett said in 2019, when giving evidence at the Lords Constitution Committee, that the small number of sexism cases in courts is ‘exaggerated’. But I say that all sexism cases must be eradicated. Even if it is a small amount, it is still dangerous.

I believe the pool from which judges are drawn is too narrow. Retention for women is dismal because of the abuse they can face

I have never thought that I could make a difference and now I realise that if I stand a chance of making a difference, I have to be brave enough to challenge it.

I welcome Baroness Helic’s amendment to the Domestic Abuse Bill in the House of Lords, which aims to provide magistrates and judges with specialist training on domestic abuse. I hope that the Government will support the amendment because this could make such a difference.

We need to challenge and interrupt abuse at every level in society. That is why I choose to challenge the judiciary.

I believe the pool from which judges are drawn is too narrow. Retention for women is dismal because of the abuse they can face.

In the 2019 Association of Women Barristers report Chris Henley QC, as Chair of the Criminal Bar Association, gave several incidents in which male judges made disparaging comments to women barristers in court as examples and concluded, ‘talented women are leaving criminal practice…even the most successful junior women have increasingly had enough.’

In my opinion, our judiciary is poorly served because of misogyny and discrimination, and we ultimately need a wider, more diverse pool if we are going to change the culture and structure.

Prevent domestic violence – teach boys not to hurt girls and ditch gender stereotyping. Protect – protect women in the home, workplace, and on the streets. Prosecute – stop lenient sentencing of the men who kill, rape, bully and belittle women.

In the week we celebrated International Women’s Day, I choose to challenge domestic abuse and I hope others will join me in this vital campaign.

College Admissions Scandal: Where Are They Now?