The destroyed shopping centre is in the middle of a busy district in Kyiv (Picture: Reuters)

Shocking CCTV footage shows the moment the shelling hits the complex, turning into a ball of flames that sent debris flying across the capital city.

Firefighters descended on the scene and were filmed removing bodies from the wreckage in further disturbing footage released by officials.

Kyiv’s mayor and former world heavy boxing champion Vitali Klitschko confirmed an explosion had devastated the mall, known as Retroville, which was home to several Western chains, including McDonald’s, H&M, KFC and Samsung.

‘According to the information we have at the moment, several homes and one of the shopping centres [were hit],’ he said on his Telegram channel.

This latest attack from Putin’s advancing troops comes as British intelligence reports they have stalled in their approach of the city.

The bulk of Russian forces remain more than 25 km (15 miles) from the centre of Kyiv. 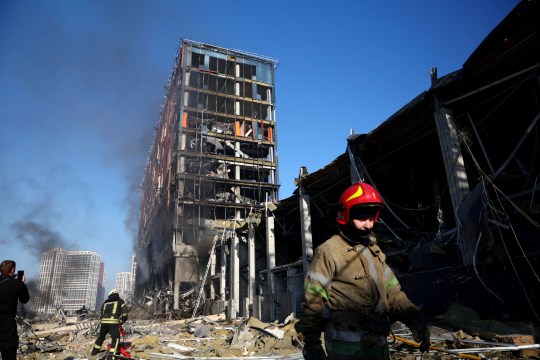 The shopping centre was obliterated in the blast (Picture: Reuters) 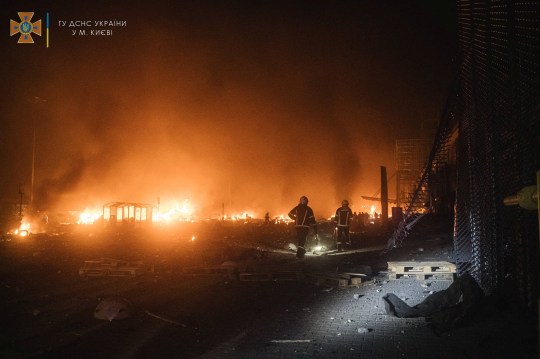 Buildings were razed to the ground in the massive strike by Russian troops (Picture: Reuters) 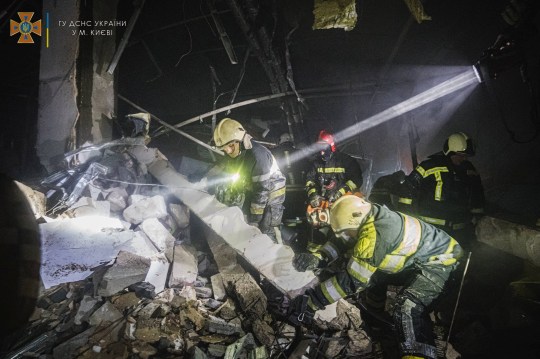 Firefighters desperately scramble to remove debris from the shopping centre in the search for survivors (Picture: Reuters) 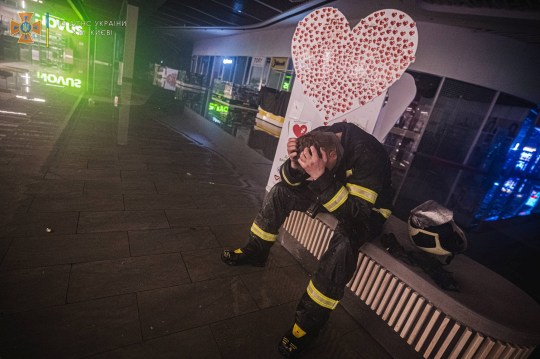 A firefighter holds his head in despair outside the shelled shopping centre (Picture: Reuters)

‘Forces advancing from the direction of Hostomel to the northwest have been repulsed by fierce Ukrainian resistance.’

Meanwhile, in the besieged city of Mariupol, Ukrainian officials defiantly rejected a Russian demand to lay down their arms and surrender in exchange for safe passage.

‘There can be no talk of any surrender, laying down of arms,’ Ukrainian Deputy Prime Minister Irina Vereshchuk said. ‘We have already informed the Russian side about this.’

It’s not yet known what action Russia plans to take after their offer was rejected, but it will likely resume attacks on the city.

Moscow warned authorities in Mariupol could face a military tribunal if they sided with what it described as ‘bandits’.

Previous bids to safely evacuate the city have failed as Putin’s troops continued shelling, killing civilians as they tried to flee.

Tearful evacuees from the city described how battles were taking place ‘over every street’.