This stunning video shows a 12ft long basking shark mingling with paddle boarders off the coast of Torquay.

The borders quickly got down on their knees as the creature weaved in and around the group before swimming off.

Instructor Owin Wong, 18, was out with a group of four novices at Torquay Marina on Wednesday when they thought they saw two dolphins circling.

But then he heard people shouting ‘Shark! Shark!’ from the harbour wall.

He said: ‘I was scared initially because I was a bit fearful that it could be — for example — a thrasher shark which are pretty aggressive and can attack humans.

‘But I have an interest in wildlife. Basking sharks are non-predatory, so my first thing was to reassure the paddlers it’s nothing to serious, to remain calm and enjoy the moment.

‘You have to be calm – if you freak out the other people on the boards will start freaking out.’

Owin says the shark just ‘floated about, did its own thing’ and feels very privileged to have spotted it. 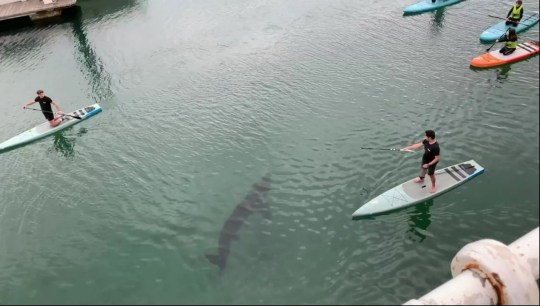 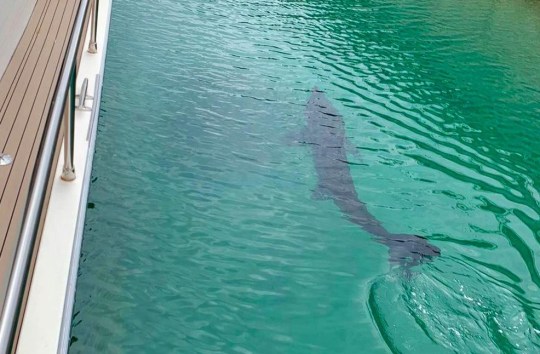 While it may have given paddleboarders a shock, basking sharks are not harmful to humans (Picture: PA)

He added: ‘I’ve never seen one before and heard they’re really rare and hard to come by.

‘The head instructor said he’d only seen one once I think – so I’m very lucky to see one. This just shows how great British wildlife can be.’

Paul Brown, 55, owner of Torquay Water Sports also noticed the shark as he was cleaning his boat.

He said: ‘It was very unusual, it was sufficient for us to go “oh golly there’s a giant shark!”

‘Certainly, inside Torquay you don’t often see anything other than small fish, so it obviously swayed in to have a munch.’ 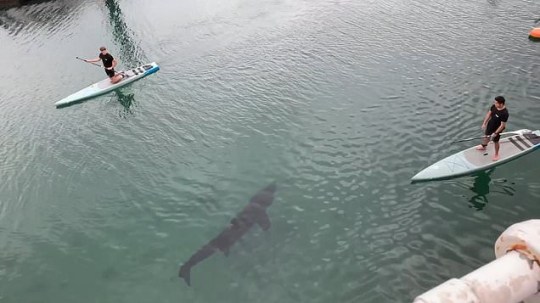 The shark just ‘floated about, did its own thing’ before swimming away from the group 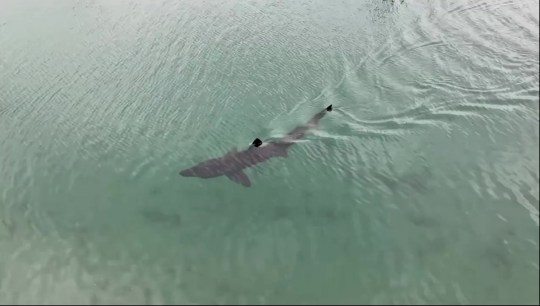 The Royal National Lifeboat Institution said coxswain Mark Criddle ‘did a double take’ when he spotted the shark close to the pontoon in nearby Brixham.

A spokesperson added: ‘He reckons this basking shark is 10-12 ft. The largest fish in British waters, basking sharks are typically anything up to 28ft and can weigh 9000lb.

‘No need for panic though, their main food is plankton, and they don’t bother humans.’

Tonight we’re going to drink 5,000,000 pints on first Friday night out in months


The second-largest fish in the world behind the whale shark, basking sharks are filter feeders that eat tiny, planktonic prey. Their teeth are numerous and very small, often numbering 100 per row.

They spend most of their time near the surface, swimming with their huge mouths wide open, filtering out their preferred prey. However, from time to time they do also make deeper, feeding dives.

They are found in all the world’s temperate oceans and its name derives from its habit of feeding at the surface, appearing to be basking in the warmer water there.

Basking sharks live for around 50 years and often swim around either in pairs or groups of up to 100.