Huddersfield woman found out she had ovarian cancer due to cat

Cats may have nine lives, but one very special feline has gifted one to her owner.

Humbug the black cat jumped onto Gill Kelly’s stomach at their home in Huddersfield, West Yorkshire, in 2017.

In doing so, she unknowingly saved her life, Gill believes.

The pet owner felt excruiating pain in her stomach the moment Humbug landed, and even screamed.

Her worried husband, John, insisted she see a doctor as quickly as possible.

It emerged that Humbug had jumped onto a 2kg tumour that had gone unnoticed.

And after tests, it emerged that Gill had ovarian cancer. 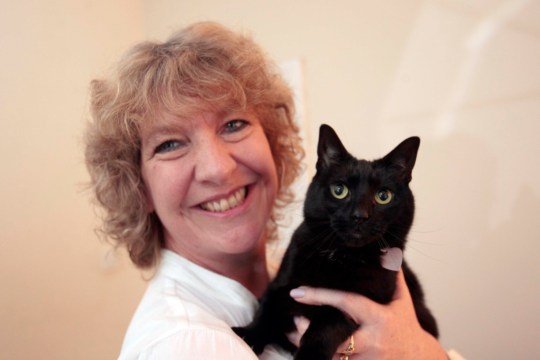 Gill Kelly, from Yorkshire, has Humbug to thank for her early diagnosis (Picture: Huddersfield Examiner/MEN Media)

The mum-of-two had had some symptoms – such as bloating and erratic periods – but she mistakenly thought it was the onset of menopause.

The tumour was safely removed and since having surgery, Gill has been disease-free.

Humbug was nominated for a Cats Protection national award as her story spread.

Gill told the Huddersfield Examiner: ’To me she is the most special cat in the world!

‘Had it not been for Humbug, I would have continued to put up with the discomfort, meaning that the cancer would have been much more advanced and less easy to treat.’

She’s now taken up needle felting to ease her anxieties, and is creating a piece of art that will chart the history of Huddersfield’s textile heritage.

She said: ‘I think about the possibility of a recurrence every day.

What are the symptoms of ovarian cancer?

Signs and symptoms of ovarian cancer may include:

‘But needle felting completely absorbs me so that I don’t dwell on my anxieties.

‘I can start at 9pm and suddenly realise that I’ve worked right through to 2am. It has taught me how with new tools you can create a whole new life.’

She has included two cats in the artwork – Felix and Bolt.

The two felines are famous across Huddersfield for their antics at the town’s train station.