Could digging on the new HS2 railway line cause a resurgence in Roman ghouls?

One ghost hunter reckons so – and thinks they ‘won’t be too happy’ about being disturbed.

Workers on the new £100 billion line have already encountered skeletons and decapitated remains during what has been the UK’s biggest ever archaeological project.

He told the Daily Star: ‘With the building of the HS2 network, the tracks could go through land where bodies are buried and not necessarily known to all involved.

‘If this is the case then the spirits of the deceased could be woken or disrupted and would not be too happy.’ 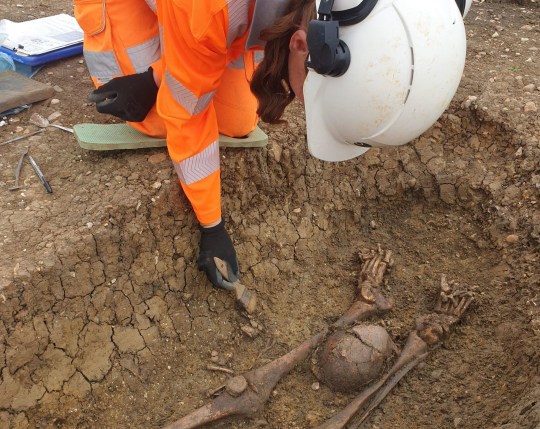 The archaeological dig near Aylebury in Buckinghamshire unearthed some spooky finds (Picture: PA)

The digging team recently discovered the remains of 40 Romans during a dig near Aylesbury, Buckinghamshire.

Some were buried with their heads placed between their legs or next to their feet.

But Miki says it is unlikely that we will see full apparations anytime soon.

Instead, ‘atmopsheric changes’ could be the first thing we notice.

‘That’s due to the spirits not being happy with the changes that are taking place.

‘It’s the same with the bodies of the dead.

‘Different religions have different traditions when it comes to the way in which their dead are buried and also how they are kept.

‘Any disruption of the land where the bodies are buried then could lead to an increase of strange activity in that area.

‘Atmospheric changes in the close area are more likely to happen rather than Julius Caesar and his Roman soldiers being seen.’

How many episodes of Killing Eve season 4 are there?