THE teen daughter of a Scottish laird who is holed up in a “collapsing” tunnel in a bid to stop HS2 has warned bailiffs are “threatening our lives”.

Eco-warrior Blue Sandford, 18, is one of a group of protesters to have spent more than 100 hours underneath Euston Square after they were evicted from their camp on Wednesday. 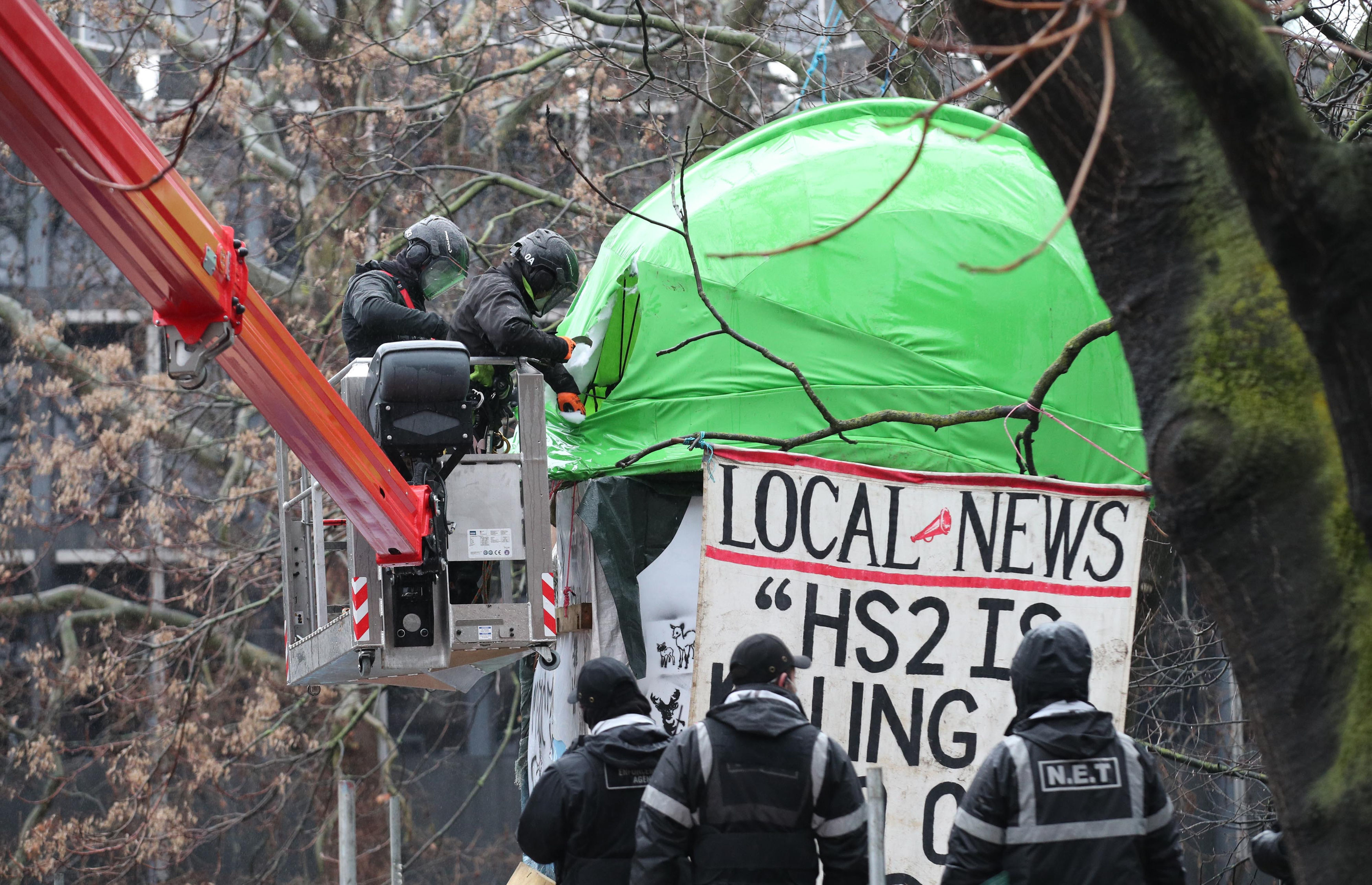 Eco-activists are living in tunnels beneath central London in a bid to stop the HS2 developmentCredit: PA:Press Association 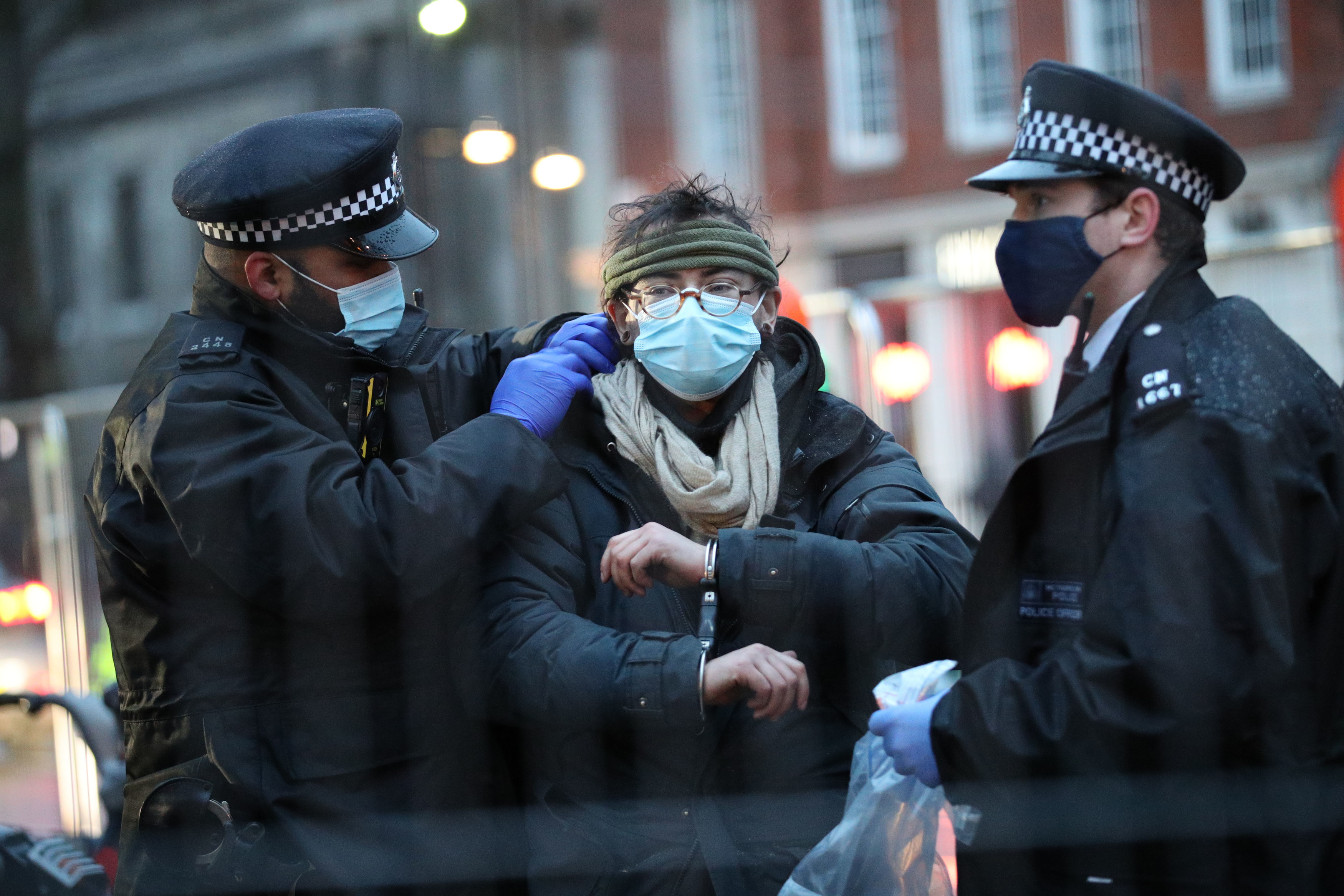 Bailiffs are working to evict the group of campaigners – which includes famous protester Swampy and the 18-year-old daughter of a Scots lairdCredit: PA:Press Association 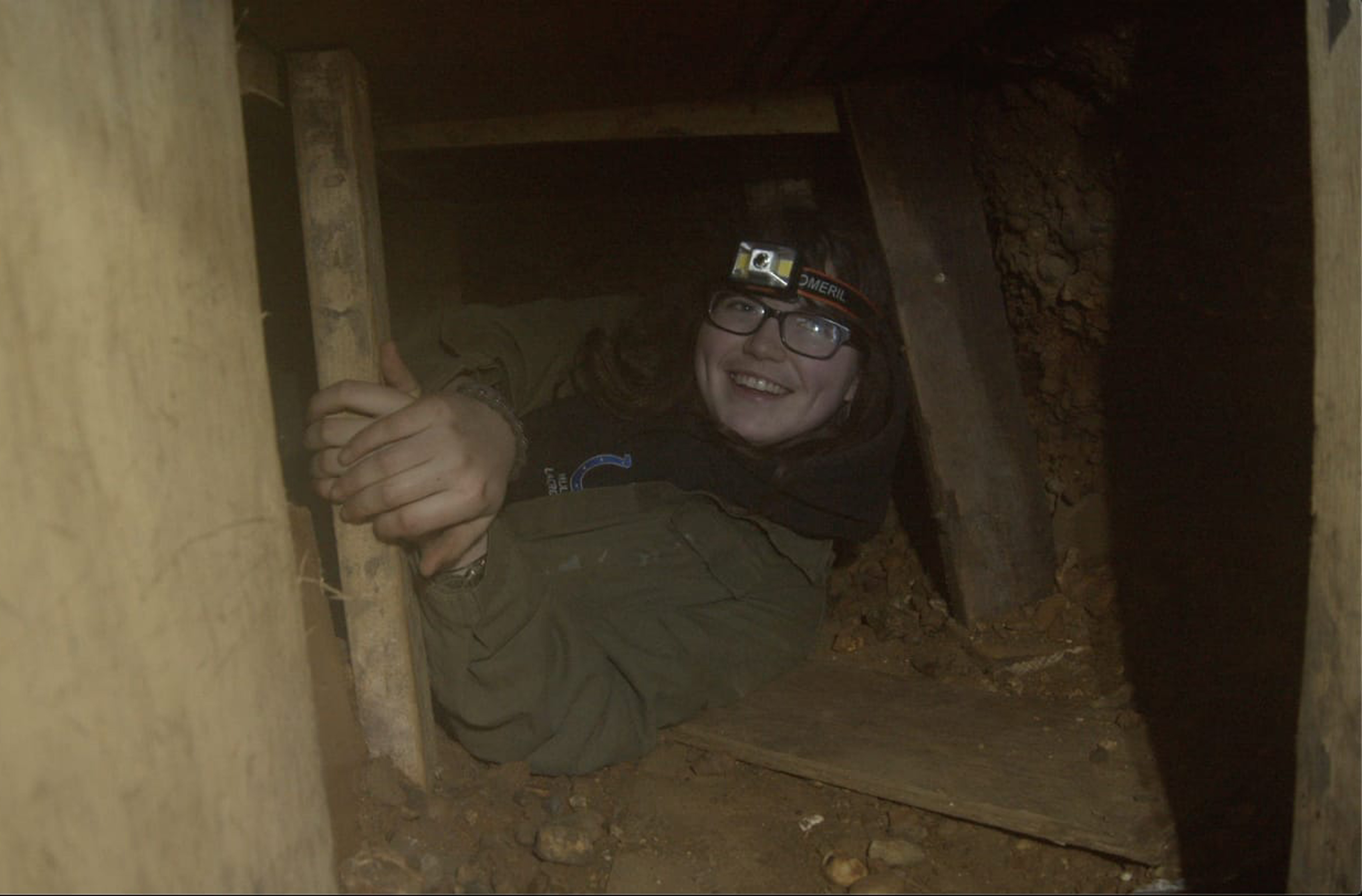 Blue Sandford has been living in the tunnels for more than 100 hoursCredit: Hyde News & Pictures Ltd

The protesters –  including long-time campaigner Swampy – have warned they’re reaching “tipping point” as water pours into the tunnel and bailiffs try to turf them out.

Meanwhile, the tunnel has already collapsed five times – and HS2 bosses say they fear the campaigners will be suffocated by carbon dioxide.

Now Sandford, who lives between her father’s private Scots island and her mum’s home in West London, has vowed to stay underground – despite being frightened for her safety.

Speaking to the Mail on Sunday, she said: “It’s really strange being right at the centre of this huge thing but I can’t just sit at home.

“I am really terrified of the climate change disaster we are facing and I don’t know what else to do to change things.

“HS2 is incredibly damaging and despite the Government declaring a climate emergency they are not following through on it at all.”

Blue’s dad Roc Sandford, a wealthy landowner, is a long-standing environmental campaigner who supports the efforts of both his daughter and son Lazer, 20, in their battle against HS2.

And the teen says protesters have enough supplies to stay beneath the ground for weeks to come – even as water pouring in creates a dangerous situation. 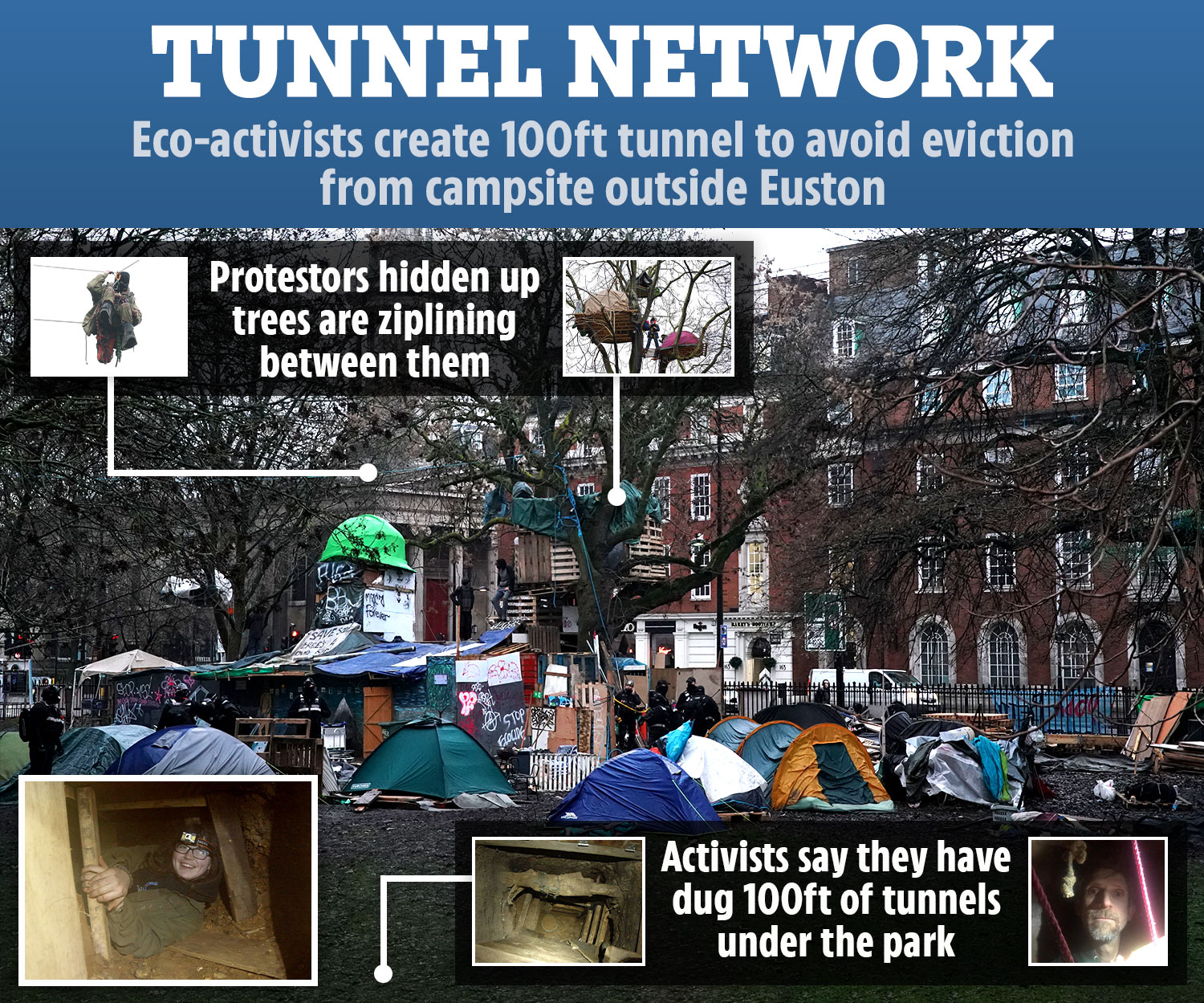 One of the activists is reportedly chained up underground 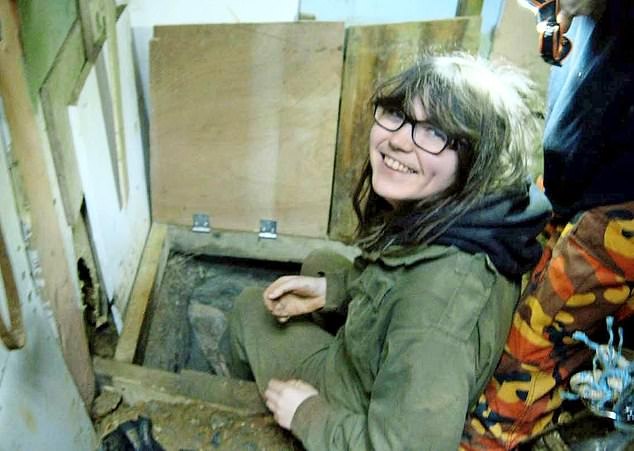 Blue says campaigners have been endangered by bailiffs 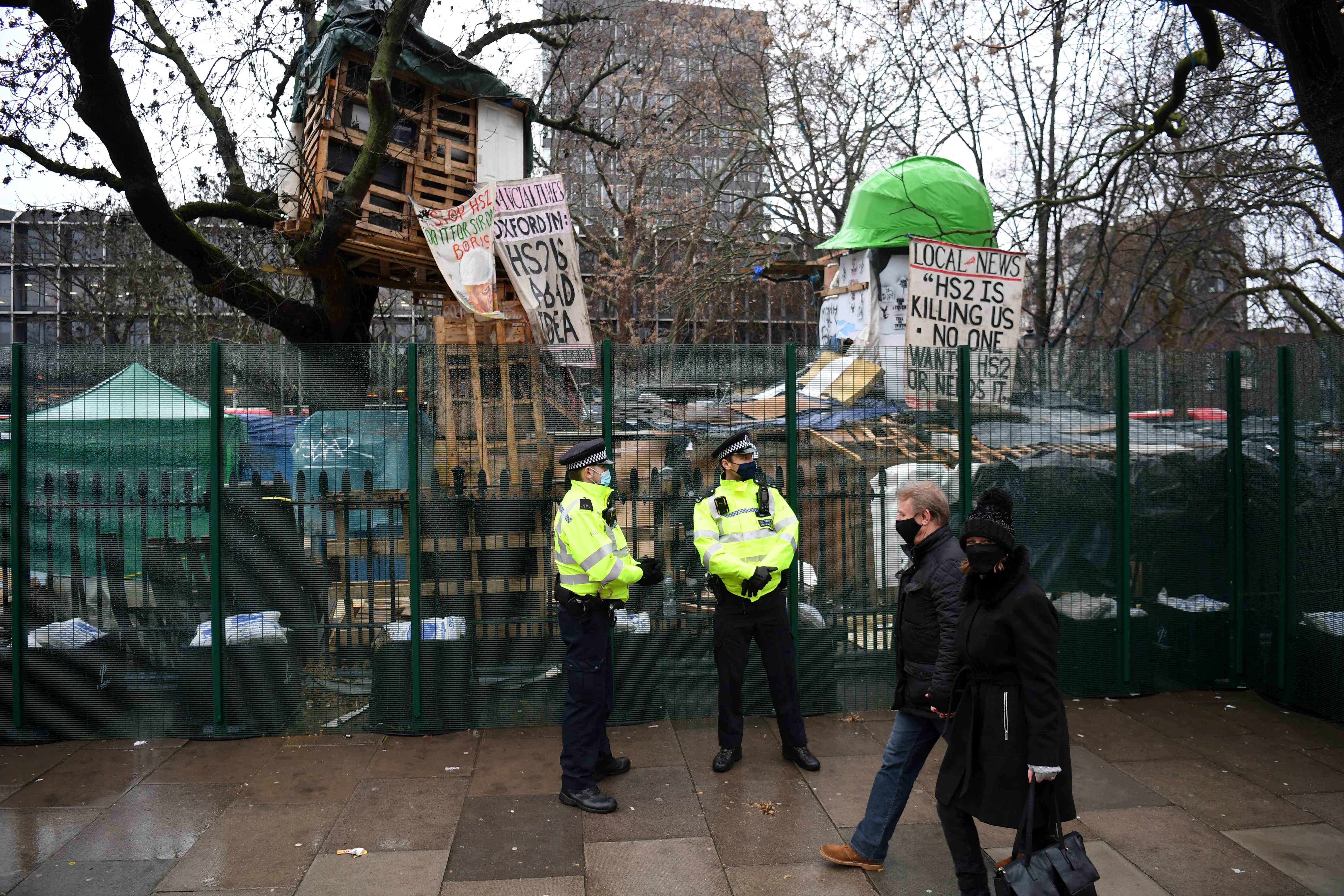 But HS2 bosses have hit back – and say they fear protesters will suffocate in the tunnelCredit: AFP or licensors

She said: “The eviction team have gone back on their word to get the water out.

“At the moment they are threatening our lives.

“When we were digging the tunnel, we had drainage systems all along so that the water on the surface wouldn’t fall down into the tunnel and cause collapse.

“They have just removed our drainage systems so our tunnel is collapsing.”

But she added: “We’re all still in good health despite the dirty tricks.

“It’s been cold since the eviction team brought in a huge compressor and sent a hose down blasting air along the tunnels.

“We’ve got lots of sleeping bags, though, and we’re taking it in shifts, with some sleeping, others awake having some food.

“We have enough stores to last six weeks. I’m surviving on rice and tins of jackfruit, as well as pastries and other stuff collected from skips.”

Despite her privileged family connections – her great-great-grandfather was the 5th Earl of Rosslyn and her great-aunt was the late racehorse owner Lady Serena Rothschild, wife of Jacob, 4th Baron Rothschild – Blue has spent large parts of her life on a remote island owned by her dad.

I’m always begging them to be careful and I sometimes feel like I’m going to collapse with fear.

Gometra has no electricity, school, shop or GP.

The youngster, who is currently ‘on strike’ from her £6,686-a-term private school, also spent the start of her 17th birthday inside a cell at a police station for blocking a road during a strike in Trafalgar Square.

Last night, her dad told the publication his children have “completely outclassed” him in their protests.

“I’m always begging them to be careful and I sometimes feel like I’m going to collapse with fear, but I am also so proud of what they are achieving,” Mr Sansford said.

“I’m a parent, not an eco-warrior, and I am terrified of the future we are cooking up for our children.

“I have been going through a really dark and miserable place knowing I could lose them.”

Yesterday, HS2 said: “The clearance of Euston Square Gardens has required careful planning and dangerous work by highly-skilled experts to try and remove protestors from perilous situations in trees and underground.

“We are concerned that the occupants of the tunnel are now impeding efforts to help them, shutting themselves off underground, and preventing us from checking air quality as we supply them with air.

“As carbon dioxide can build up in the tunnel, they are putting themselves in even greater danger.” 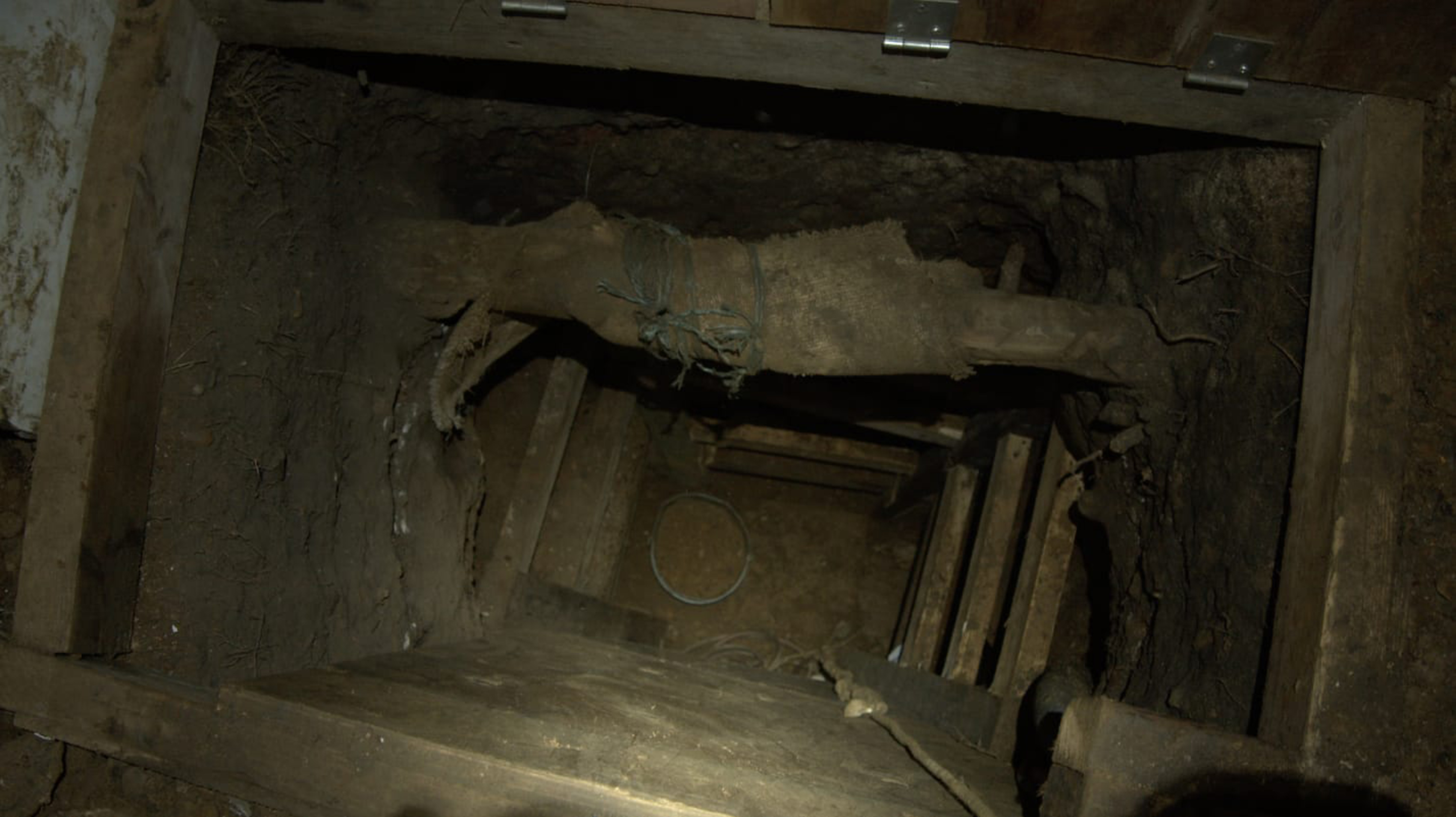 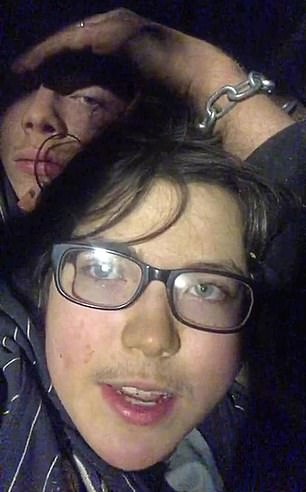