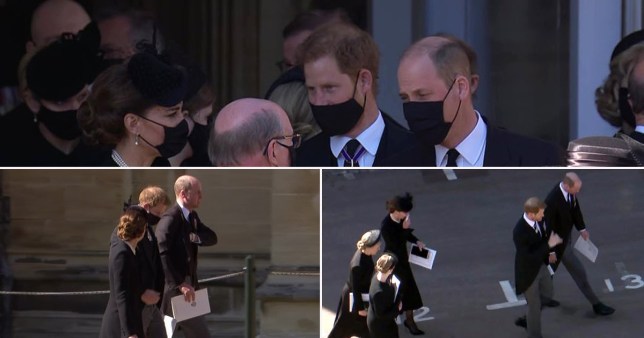 The Duchess of Cambridge has been praised for apparently facilitating a show of unity between Prince William and Prince Harry.

Kate Middleton was walking alongside the two brothers after Prince Philip’s funeral yesterday afternoon, talking with them as they left St George’s Chapel to walk back to Windsor Castle.

But she fell away from their conversation to join the Countess of Wessex and her daughter daughter Lady Louise, leaving William and Harry alone.

The two brothers have famously had difficulties in their relationship. Although the cause is not public, Harry spoke of how he hoped time could heal the rift during his and Meghan’s interview with Oprah Winfrey.

William was said to be ‘incandescent’ with rage after the bombshell interview screened, including damaging claims that a royal had raised ‘concerns’ about the couple’s children’s skin colour, and that Meghan’s mental health issues were ignored by the Palace.

Before the funeral, it had been announced that William and Harry would not stand shoulder to shoulder as they walked behind their grandfather’s coffin, but would instead be separated by their cousin Peter Phillips.

They both looked sombre as they sat opposite one another in St George’s Chapel.

However, the siblings reunited after Prince Philip was laid to rest.

A body language expert claimed that they shared a ‘genuine moment of unity’.

Judi James told MailOnline: ‘In a well-co-ordinated but also relatively natural-looking moment, Harry walked up behind William and Kate to then join them, walking between them and chatting to them both.

‘After a few seconds of what looked like natural and not self-conscious conversation, Kate fell back, leaving the two brothers walking off talking alone.

‘It looked like a genuine moment of unity rather than something contrived for the cameras.’

The Duchess of Cambridge was described as a ‘peacemaker’ in the press for tactfully giving them a moment alone. 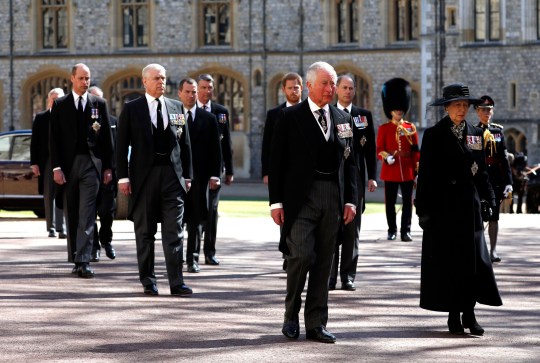 William and Harry walked apart as they followed the Land Rover Defender carrying the Duke of Edinburgh’s coffin (Picture: PA)

It was the first time they had been seen in public together in over a year, and seemed to show the rift may not be as bad as feared.

Family plans for today have not been made public and it is not known how long Harry intends to stay in the UK before heading back to his pregnant wife Meghan in the US.

The royal family will continue to grieve this week following the Duke of Edinburgh’s funeral, although the period of national mourning has ended.