Havoc caused by Storm Malik is to be followed by a second storm on Sunday (Picture: North News & Pictures)

Homes could be without electricity for the whole weekend as the impact of a storm heading for Britain could be worse than expected.

Scottish First Minister Nicola Sturgeon chaired a resilience meeting on Saturday as winds as high as 147mph were recorded.

At least two people were killed by Storm Malik in different parts of the country, as trees were sent tumbling down over a 60-year-old woman and a boy, aged nine.

Sturgeon said on Twitter that the impact of the storm had been ‘severe’ but that Storm Corrie – due to hit on Sunday afternoon – ‘may be more severe for parts of Scotland’.

Areas including the Highlands, Grampian and Tayside are particularly vulnerable to damage, she added.

On Saturday there were over 209 power outages across Scotland, mostly in the northeast or north of the country.

Meanwhile, police, firefighters and the local council have evacuated people from their homes in Glasgow over fears high wind may damage a historic building. 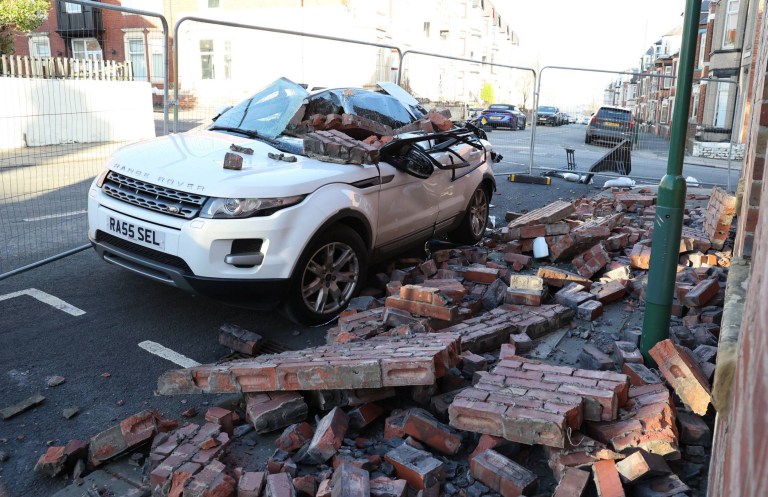 Many buildings and cars were left damaged by the storm that swept much of Scotland and northern England (Picture: North News & Pictures) 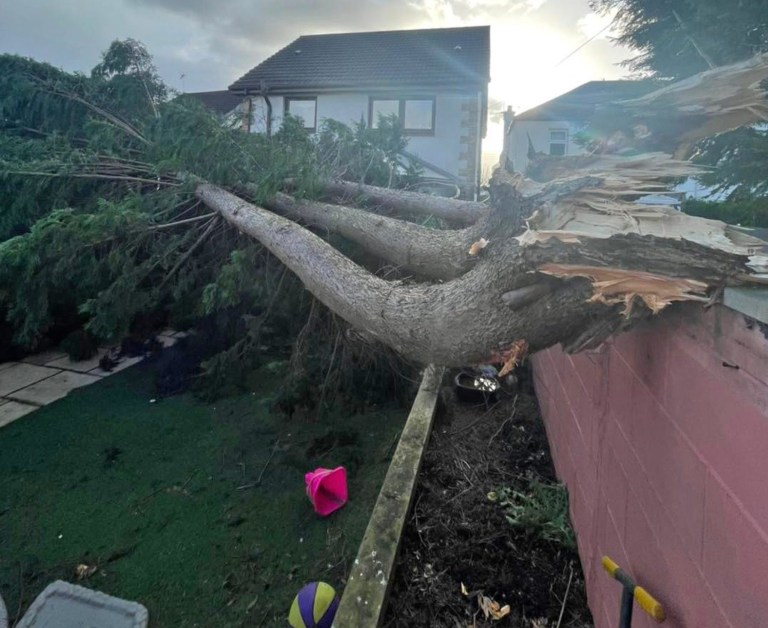 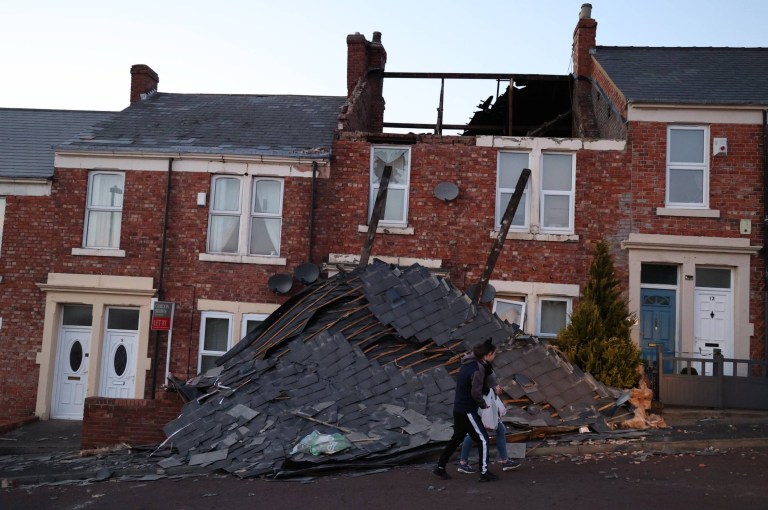 A whole roof was blown off this terraced house in Gateshead amid the storm (Picture: North News & Pictures)

An ‘exclusion zone’ has been set up around Old Trinity College, in the Park Circus area of the city, and the surrounding area over worries that existing structural issues may be exacerbated by Storm Malik, which has seen winds of more than 100mph reported in parts of Scotland.

A spokesman for Glasgow City Council said residents can expect to be out of their homes for ‘considerably longer than 24 hours’, although he would not be drawn on how long.

A rest centre has been set up at the nearby Kelvin Hall to help those who have been affected.

The council spokesman said: ‘There’s three towers on the building… the condition of that had deteriorated to the point where the owner’s contractors and our building standards team thought immediate evacuation was necessary. 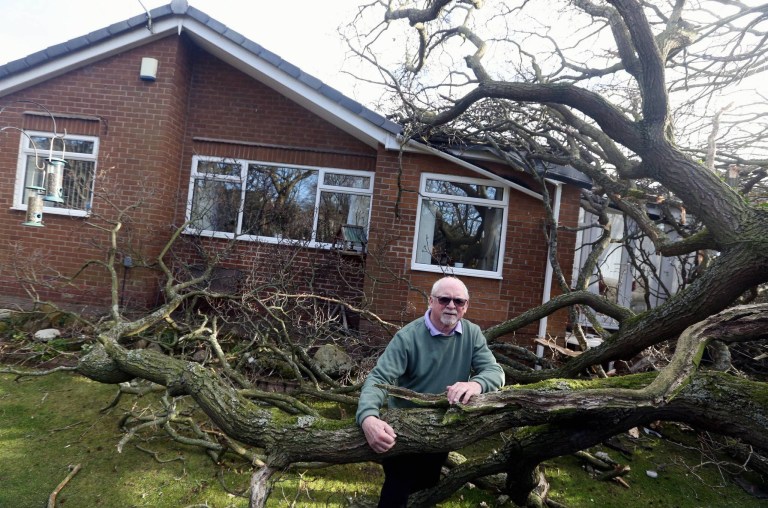 Fred Downie, poses by an uprooted tree in his garden in Newcastle (Picture: North News & Pictures) 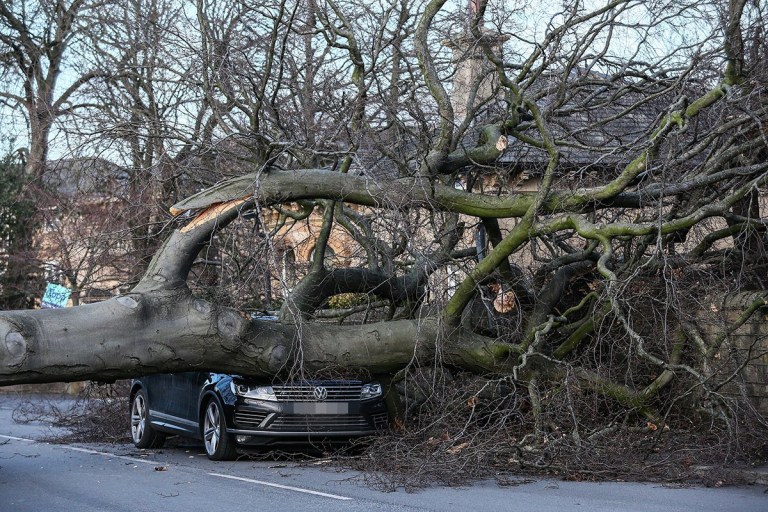 A car is crushed under a fallen tree in Huddersfield after Storm Malik battered the country with strong winds (Picture: LNP) 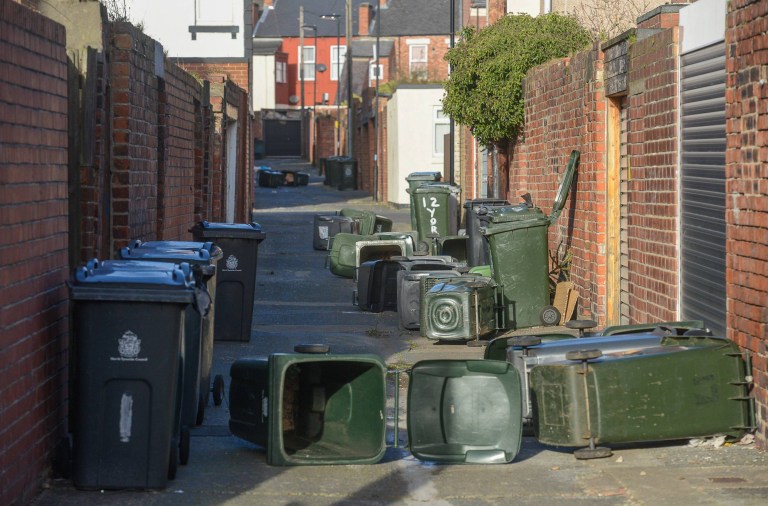 More strong winds are on the way, particularly for people in Scotland (Picture: North News & Pictures)

It is understood the owners of the building were seeking to address cracks that already existed in the building’s towers before the storm hit.

A spokeswoman for Police Scotland said: ‘Around 12.55pm on Saturday 29 January 2022, police assistance was sought from the Scottish Fire and Rescue Service to assist with traffic management at Lynedoch Street, Glasgow (near Park Circus).

‘The Fire Service is currently dealing with an unsafe structure and officers are in attendance due to several roads being closed. A number of properties are also being evacuated.’

The fire service confirmed two appliances had been sent to the scene.
Police were called to the building last year – which was previously used as a training school for Church of Scotland ministers – when stone fell from one of the towers, according to the Glasgow Times.