Seven centuries after it was created, a priceless Sephardic Jewish book whose wine-stained pages have somehow survived exile, the Inquisition, the rise and fall of an empire, two world wars and the Bosnian conflict, is making a homecoming. Of sorts.

The codex, known as the Sarajevo Haggadah after the city where it has been kept since at least 1894, is thought to have been made in north-east Spain in about 1350, possibly as a wedding present to mark the union of two prominent Jewish families.

Like all haggadahs, it contains the stories, prayers, rules and rituals of the Passover feast. But unlike most of them, and in contravention of the prohibition on “graven images”, many of its 142 bleached calf-skin pages are decorated with vibrant illustrations of the creation of a resolutely round Earth, of slavery in Egypt, and of Moses leading the Jewish people towards the promised land. Elsewhere, an enormous serpent talks Eve into eating the forbidden fruit, Noah sails forth in his ark and Sodom and Gomorrah are consumed by fire.

The pictures, last glimpsed in Spain before the expulsion of the Jews in 1492, can now be seen in Madrid at an exhibition organised by the Spanish government’s Sefarad-Israel Centre and the embassy of Bosnia and Herzegovina.

While the show does not feature the actual Sarajevo Haggadah – the original, kept in the National Museum of Bosnia and Herzegovina, is too valuable to travel – its 52 facsimile images offer an eloquent summary of the skill, effort and devotion that went into making the book.

The codex contains the stories, prayers, rules and rituals of the Passover feast. Photograph: c/o Sefarad-Israel Centre in Madrid

But, as one of the exhibition’s curators points out, this particular haggadah is as famous for its peripatetic existence and preternatural powers of endurance as for its religious and cultural content.

“This exhibition is about sharing this remarkable story and showing people the beauty of the book and how it survived,” says Jakob Finci, a retired lawyer and diplomat who serves as president of the Jewish community of Bosnia and Herzegovina.

“It’s an important book for Jews all over the world, but most of all for the Jews of Bosnia and Herzegovina.”

After leaving Spain during the expulsion, the haggadah turned up in Italy in 1609 when a priest working for the Roman Inquisition read through it and added a note confirming it contained nothing to offend the Roman Catholic church’s sensibilities.

From there it eventually made its way to Sarajevo, where in 1894 it was sold to the national museum by a local Sephardic family for 150 crowns. Museum staff hid it from the Germans when the Nazi occupation of Sarajevo began in 1941, stashing it in a mosque in the mountains. Just over half a century later, the haggadah survived the heavy shelling inflicted on the museum during the siege of Sarajevo.

Little wonder, then, that the book has come to be seen as something of a talisman by the country’s Jews and its wider population.

“It was always saved by people who weren’t Jewish, and it became a kind of symbol of Sarajevo,” says Finci. “It’s liked a phoenix that rises again after each catastrophe. The history of the Sarajevo Haggadah has become a kind of legend in Bosnia and all over the world.”

Miguel de Lucas, the president of the Sefarad-Israel Centre, hopes the exhibition will help bring modern Spain a little closer to its past, and to the culture of the men, women and children who were thrown out of their homeland by King Ferdinand and Queen Isabella. 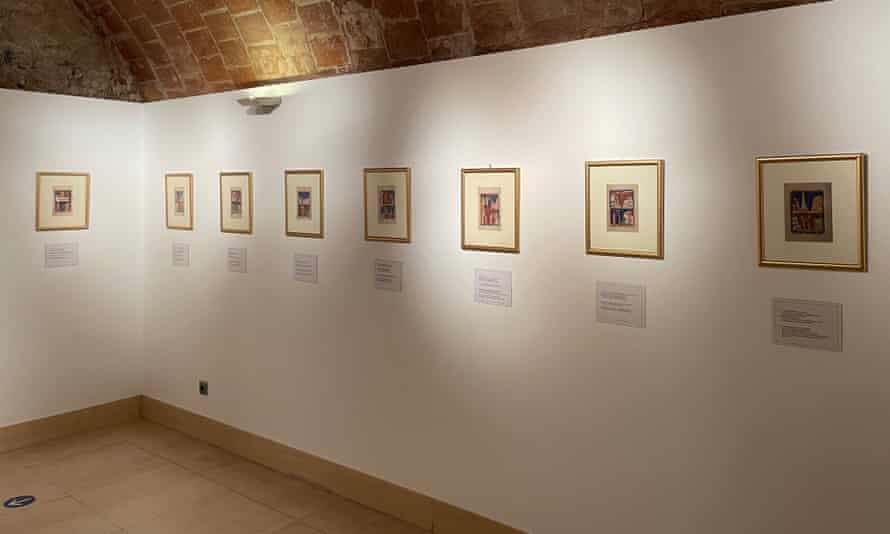 Copies of the work on show in Madrid. Photograph: c/o Sefarad-Israel Centre in Madrid

“The Sarajevo Haggadah isn’t very well known in Spain at all,” he says. “I think that a lot of Spaniards think of Sephardic Jews as characters from literature, and we love showing people that they still exist in the 21st century and that they have a deep love and nostalgia for the country that actually expelled them.”

Whenever he visits as Sephardic community, whether in Sarajevo, İzmir, Thessaloniki or Plovdiv, De Lucas says he is struck by that fondness.

“The Haggadah is a kind of symbol of that and a symbol that can help Spanish people today understand that Sephardic Jews aren’t characters from 16th- and 17th-century literature, but people who still exist and often live in communities that are maintaining their traditions under difficult circumstances in the 21st century.”

When the exhibition finishes in Madrid in mid-December, it will move to Seville and then, with luck, to Barcelona, close to the region where it probably originated.

Finci, who was born in a concentration camp on the then Italian-occupied Croatian island of Rab in 1943, oversees a community that lost 85% of its members to the Holocaust. Today there are around 1,000 Jews in Bosnia and Herzegovina, more than three-quarters of them Sephardic.

In the small, phoenix-like book, in the distance it has travelled and in the wars it has survived, Finci sees an old but enduring message.

“I hope this exhibition in Spain will remind them what they lost in 1492 when they lost the Jews and everything the Jews made, including the haggadah,” he says.