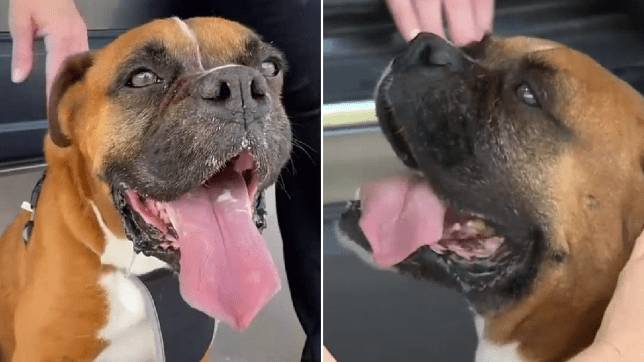 Tank the boxer looked overjoyed to be back with his owners two months after he saved them from a housefire, only to disappear (Pictures: KBTX)

Tank ran away the night after his barking woke Calvin Bice and his wife Shae up after their home in Millican, Texas, caught fire in February.

Shae credited Tank and her other dog for saving them from a fiery death, and said: ‘I was asleep in the back bedroom and my husband fell asleep in the living room. When I sat up in bed the smoke was down to my level in bed.’

The Bices’ home was badly damaged in the fire, and Tank ran away the next day after struggling to adjust to the temporary accommodation his owners had moved into. Calvin and Shae were bereft by his disappearance – and immediately began a huge hunt for him.

Shae told KBTX: ‘I put up flyers. I put it on social media. I called every rescue, pound, hospital. I’ve been doing that since March 16th. Until today.’ Shae had begun to give up hope – until she received a call from a Good Samaritan called Kristi Schiller with some good news.

Kristi says she had been caring for Tank, who she believed to be a stay, when her husband spotted one of Shae’s flyers appealing for information about her missing pet.

She recalled: ‘My husband went to the Wellborn post office this morning to drop something off and he called me after seeing the flyer.

‘I said “You have to call her.” Within 30 seconds of calling her, she started crying.”’

Shae was so stunned she initially thought the call was a prank – but she quickly realized that Tank had indeed been found, and that he was in good hands.