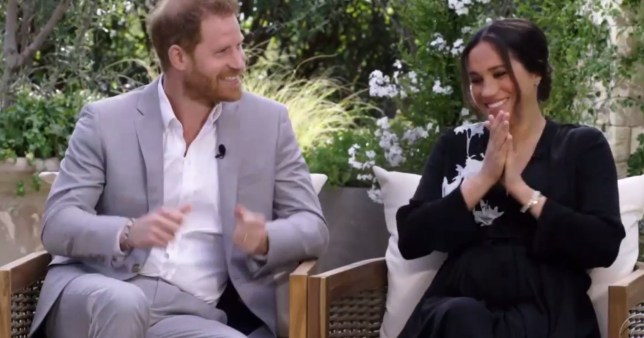 Harry and Meghan looked delighted as they revealed they are having a baby girl during Sunday night’s interview with Oprah Winfrey (Picture: CBS/Harpo)

Prince Harry and Meghan Markle have told Oprah Winfrey that their next baby will be a girl, and that she is due this summer.

Harry broke the news during the bombshell interview on Sunday, saying: ‘It’s a girl.’ He added the news was ‘amazing,’ and said he was: ‘just grateful, to have any child, any one or any two.

‘To have a boy and then a girl, what more can u ask for,’ Harry said. The couple, who have a one year-old son called Archie, added that they were ‘done’ and do not plan to have any more children.

The Duke and Duchess of Sussex shared the happy news during Sunday night’s blockbuster interview, which will be screened by ITV in the UK on Monday. 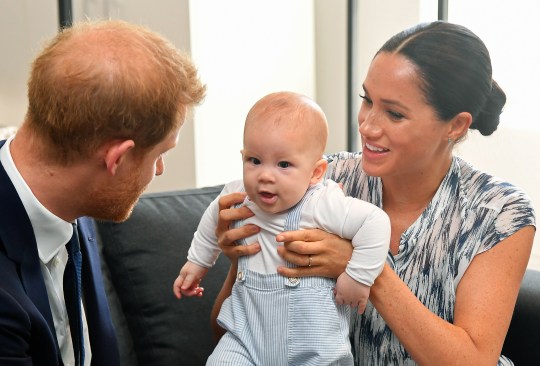 Oprah spent the first hour grilling Meghan, and got the Duchess to reveal how Kate Middleton had allegedly made her cry in the run-up to her May 2018 wedding.

Meghan also claimed unidentified figures within ‘the institution’ – the term she and Harry used to describe the monarchy – were concerned about ‘how dark his (Archie’s) skin might be’ while she was pregnant with her first son.

She said the pressures of royal life – and negative stories in the UK press – drove her to constant thoughts of suicide.

Harry stunned viewers shortly after his appearance on screen, by claiming his father Prince Charles ‘stopped taking my calls’ while he and Meghan were planning their exit from full-time royal life in late 2019 and early 2020.

The couple filmed the chat last month. It has already sparked a war of words with Buckingham Palace, with unidentified sources telling The Times that Meghan had bullied multiple members of staff during her time in the UK.

She and Harry have denied that claim, and said the Duchess is the victim of a racially-motivated smear campaign.