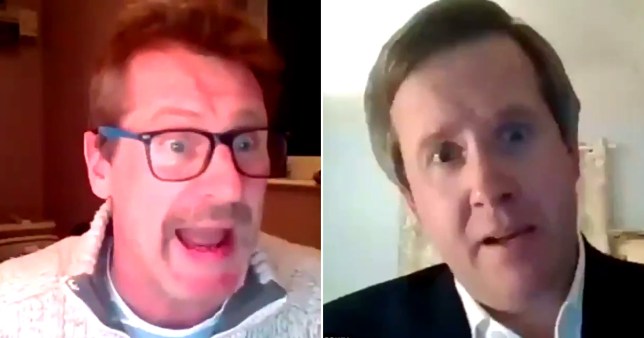 Councillors for the Royal Borough of Windsor and Maidenhead were raging over Zoom (Pictures: RBWN)

The viral Handforth Parish council meeting has got some competition from an equally explosive Zoom call that descended into chaos.

Jackie Weaver recently proved she had the ‘authority’ as she coolly booted some raging councillors from their virtual meeting, becoming an internet sensation in the process.

But not everyone has such composure, with tensions boiling over in the Royal Borough of Windsor and Maidenhead during a heated discussion over parking. 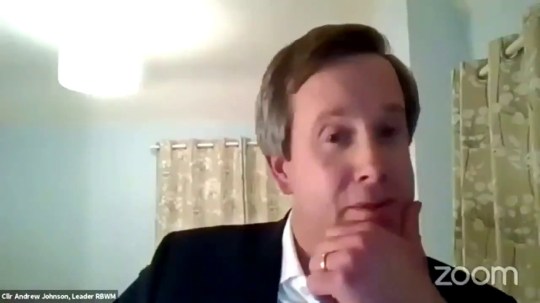 Mr Baldwin was speaking about something he said was ‘of public interest’ before Mr Johnson interrupted, and told him: ‘You’ve made your point’.

When Mr Baldwin tried to continue speaking, Mr Johnson threatened to ‘boot’ him out of the meeting – just like Ms Weaver.

The council leader said: ‘Quite honestly, Baldwin, I don’t care much for your tone – I’ve seen you in action before against one of my cabinet members and it wasn’t pleasant.’

Chaos erupted as Mr Johnson continued his bollocking while Mr Baldwin looked incredulous and asked: ‘Did you just call me “Baldwin”‘? 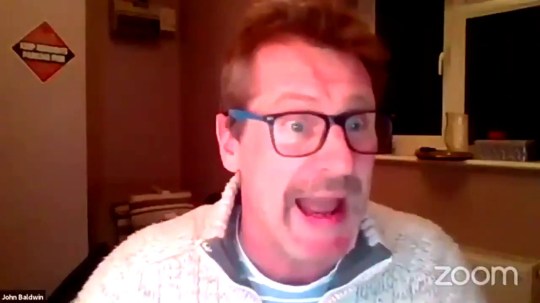 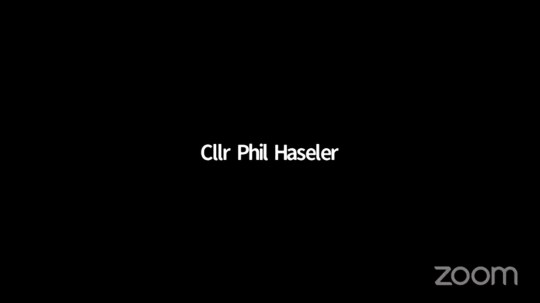 Councillor Phil Haseler did not have his video on when he told Mr Baldwin to ‘shut up’ (Picture: RBWN)

He repeated the question and was sceptical when Mr Johnson said: ‘Sorry Councillor Baldwin, slip of the tongue’.

‘Yeah right. Just like yours,’ Mr Baldwin shouted back before his face dropped at being told to ‘shut up’ by Councillor Phil Haseler out of nowhere.

‘I beg your pardon? Who told me to “shut up”?’ Mr Baldwin blasted.

The Royal Borough’s managing director, Duncan Sharkey, urged the councillors to ‘get their temper back’ but an indignant Mr Baldwin angrily asked again: ‘Who told me to “shut up”?’

This week has seen a couple of council meetings blow up, with Ms Weaver’s viral performance even leading to her own line of memorabilia.

Despite the abuse, people muttering under their breath, participants rudely laughing and answering calls during the meeting, Ms Weaver did not raise her voice once.

Instead, she simply sent both chairman Brian Tolver and Councillor Aled Brewerton to a virtual waiting room.

They had refused to recognise the legitimacy of the meeting, telling her that she had ‘no authority’ and ordering her to ‘read and understand’ the standing orders.

When Mr Tolver announced he was the clerk of the meeting, Ms Weaver made fun of him and said: ‘The chairman simply declared himself “clerk” and notified everybody of the case.

‘There is no way of stopping him from calling himself clerk. Please refer to me as Britney Spears from now on.’

Lowest UK Covid deaths since before lockdown as 373 die and cases drop by a quarter in a week to 15,845

1.4million businesses given more time to pay back Covid bounce back loans