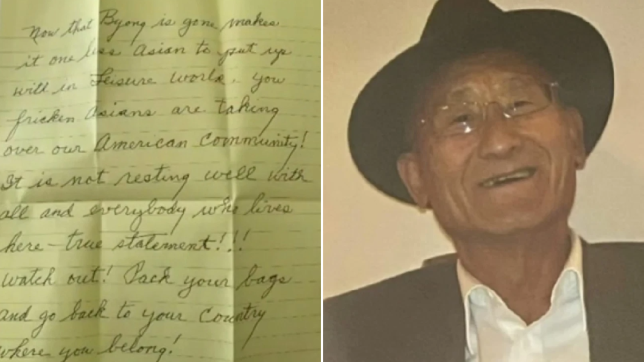 A grieving widow was sent a poison pen letter mocking her Asian husband’s death on the day of his funeral. Claudia Choi, from Seal Beach, California, has said a letter was posted to her family that says now her father ‘is gone, it’s one less Asian we have to put up with’.

The letter read: ‘Now that Byong is gone, it’s one less Asian we have to put up with in Leisure World… You fricken Asians are taking over our American community! It is not resting well with all and everybody who lives here – true statement!!

‘Watch out! Pack your bags and go back to your country where you belong.’

Claudia said: ‘They postmarked it on the day of my father’s funeral. How cruel could you be? Shame on them.’ On Friday, her family laid her beloved father, Byong, to rest and the family received the letter later the same day.

Claudia said: said she’s disgusted that someone would target her family in such a way, and has suggested that the sender of the letter lives within her parents’ 55-plus community, Leisure World, in Seal Beach, reports CBS Los Angeles.

She said: ‘To target a grieving widow, it’s disgusting.

The attack may be personal, but Claudia believes it’s also part of a growing anti-Asian agenda since the pandemic began.

It was posted to Claudia’s family on Friday, just two days after the deadly spa shootings in Atlanta, Georgia, that left eight people dead, including six Asian Americans.

The Stop AAPI Hate organization has recorded 360 hate incidents reported in Los Angeles in a year, 3,800 nationwide in 2020, which is a 149% spike from the year before.

Claudia added: ‘Racism and hatred and cruelty needs to be denounced at every turn. 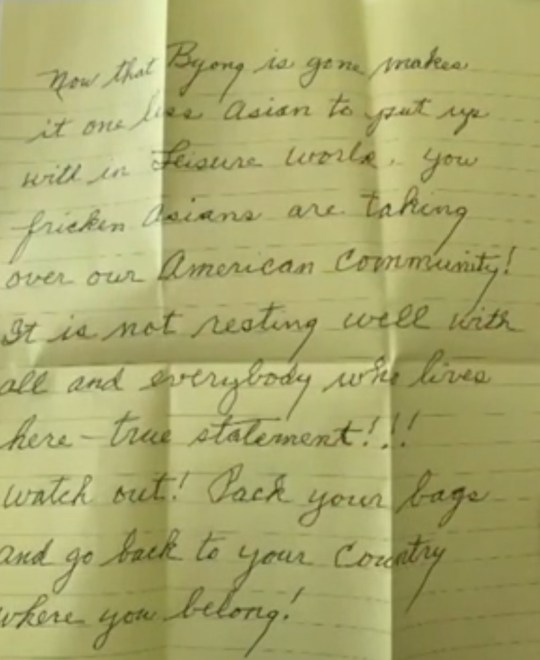 ‘It’ not just when somebody gets beaten up, although that’s terrible or when women get murdered, that’s awful but when your neighbor says something like they need to go home or makes an Asian joke, you need to speak up and say that is not okay because these little things that we allow to pass lead to bigger things.’

Claudia added that she reported the letter to the police, who are investigating, as well as the FBI.

The family has also reported the incident to bosses at the Leisure World facility.