A GRAN who bought a £325k house next to a busy A-road after SEVEN viewings has hit back at trolls criticising her for complaining about the noise.

Jackie McCormack and husband James, both 58, spent £325k on their “forever” home – only to be left sleepless by the bustling A446, nine feet away. 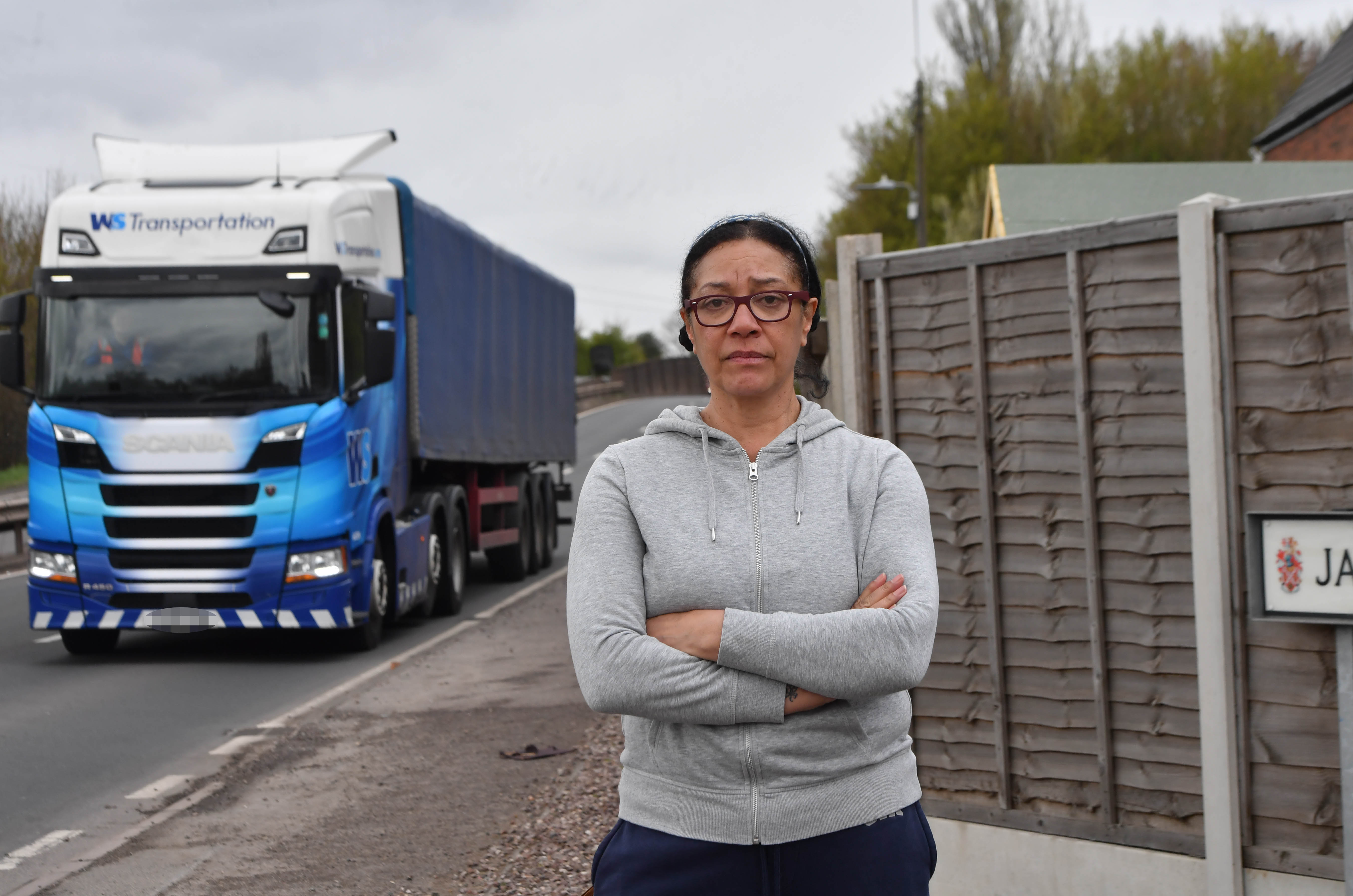 Jackie McCormack and her husband have been forced to wear earplugs because of the traffic noise from a busy A-road that behind their houseCredit: BPM 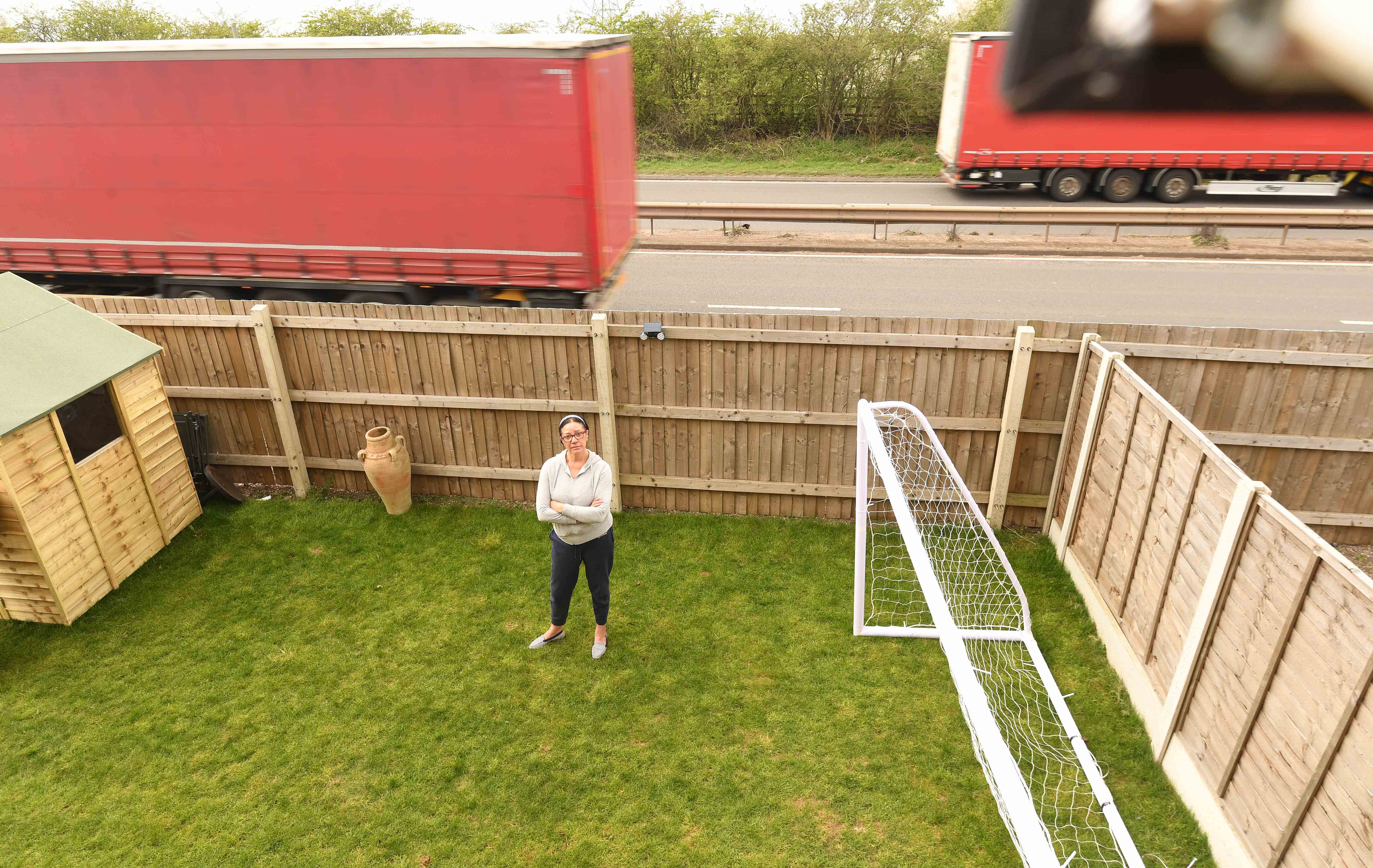 The couple’s three-bedroom home in Coleshiill, Warwickshire, is next to the A446Credit: BPM

The couple moved into the three-bed new-build in Coleshill, Warwickshire, at the end of February.

They have been forced to wear earplugs ever since thanks to the thunderous traffic.

But the grandparents have been attacked by trolls for not realising that living next to a main road would be loud.

Hitting back, Jackie showed how noise levels hit 85 decibels when a wagon rattles past – equivalent to some power tools.

And a separate test saw the volume in the garden measure well above the 120 decibels heard at a rock concert.

Using an app on her iPhone to measure the sound levels, the disability charity worker told the Sun Online: “All these trolls say ‘you should have known’. 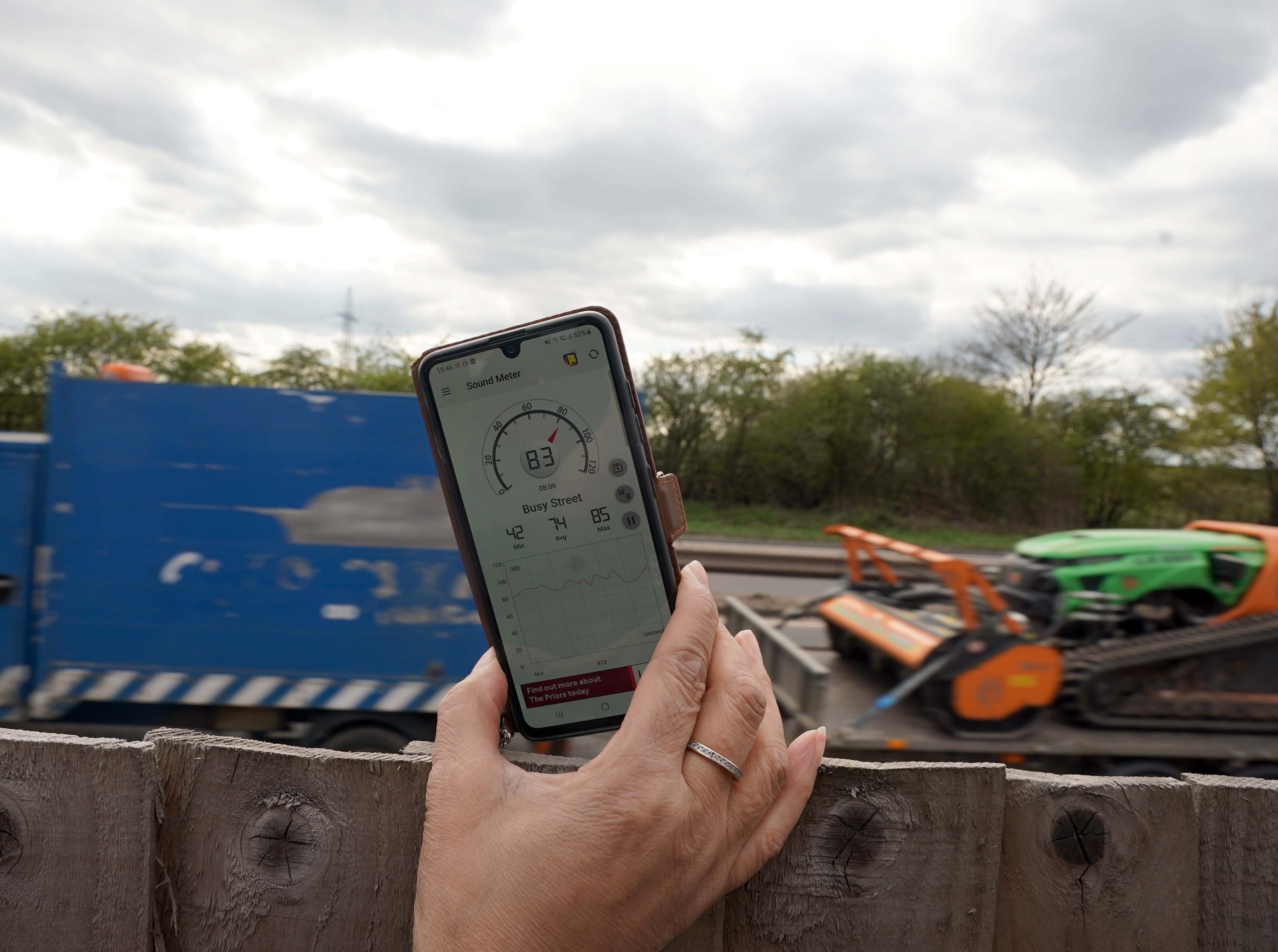 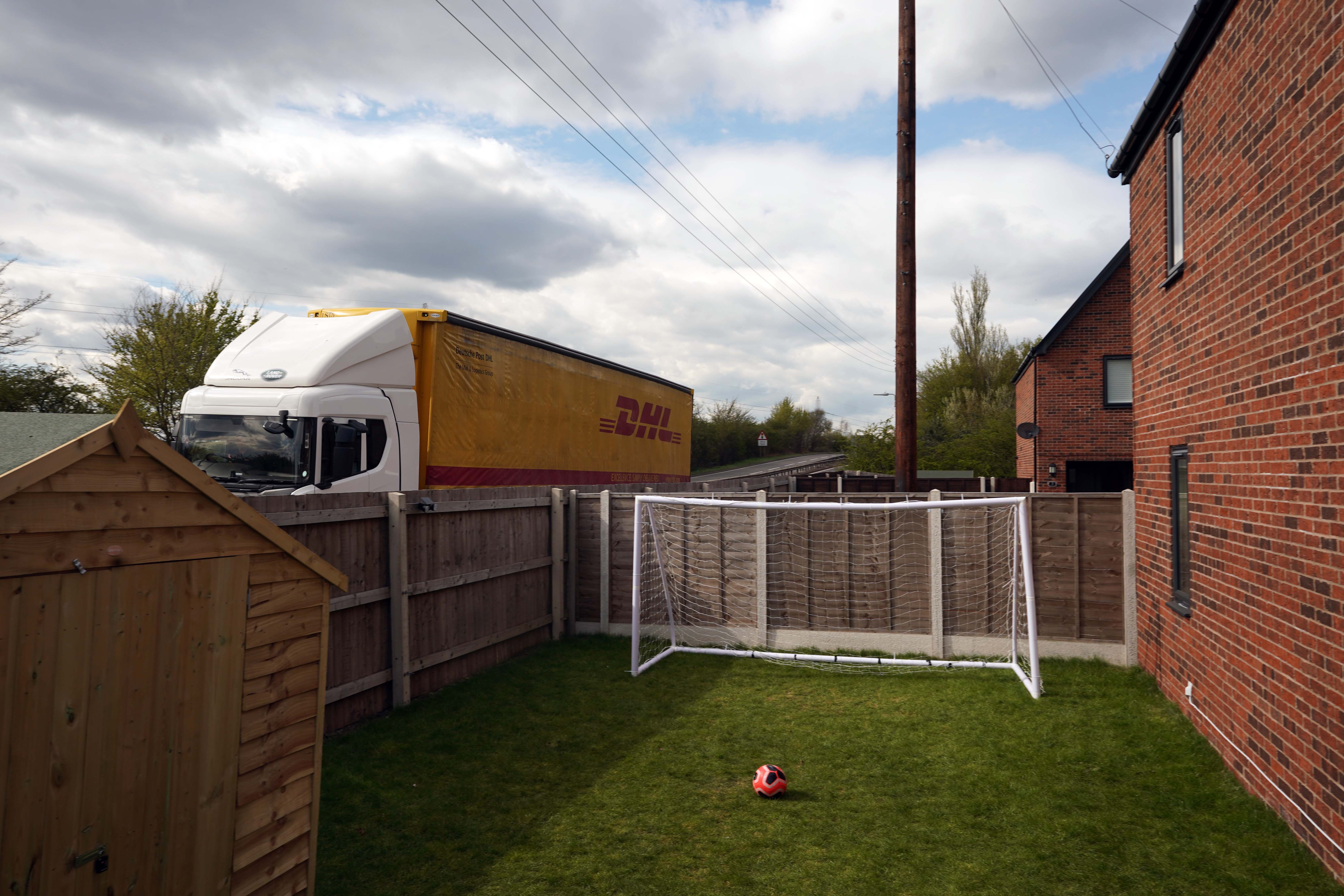 The decibel readings indicate ear protection should be wornCredit: Roland Leon / The Sun

A decibel reading of 85 is the point at which protection is advised to prevent hearing damage.

In desperation, the couple revealed they have turned to Amazon to buy gadgets that might reduce the racket.

They claim a divot on the road – used by traffic to bypass the M6 Toll – also causes their house to shake.

Jackie said: “When juggernauts pass over it the whole house vibrates.

“We have earplugs in the nighttime but the thud wakes you up. It’s shocking but no-one wants to take responsibility.

“The house has been built too close. Anyone who thinks I’m exaggerating can come and see for themselves.”

James added: “We’re just trying everything from Amazon. But with the vibrations it doesn’t matter what you put in your eyes, it rattles your bones.

“We’ve got anti-vibration pads which we’ve put under the feet of our bed but they don’t work. It is just unbearable.” 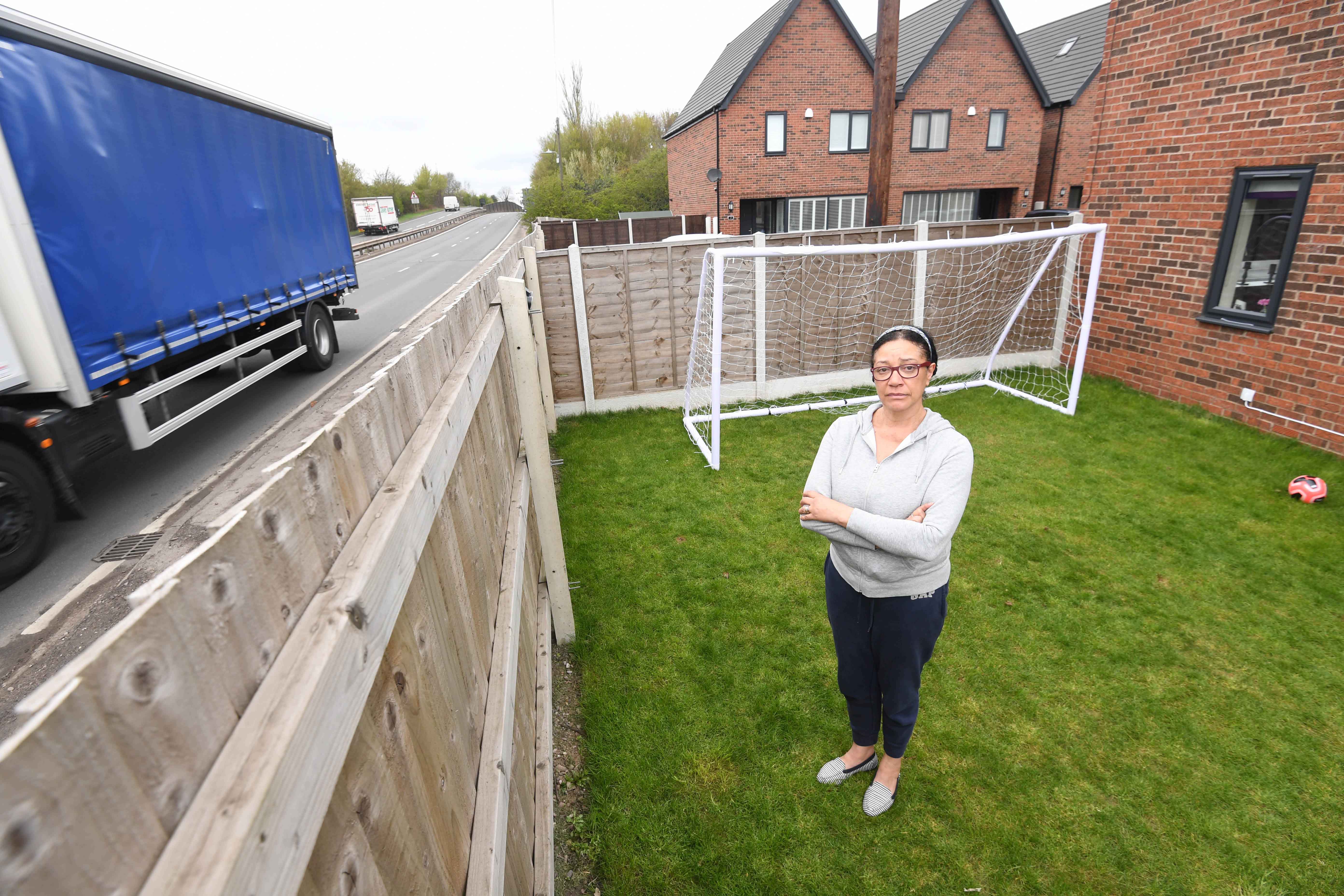 Traffic zooms past just yards from their dream home from morning til nightCredit: BPM 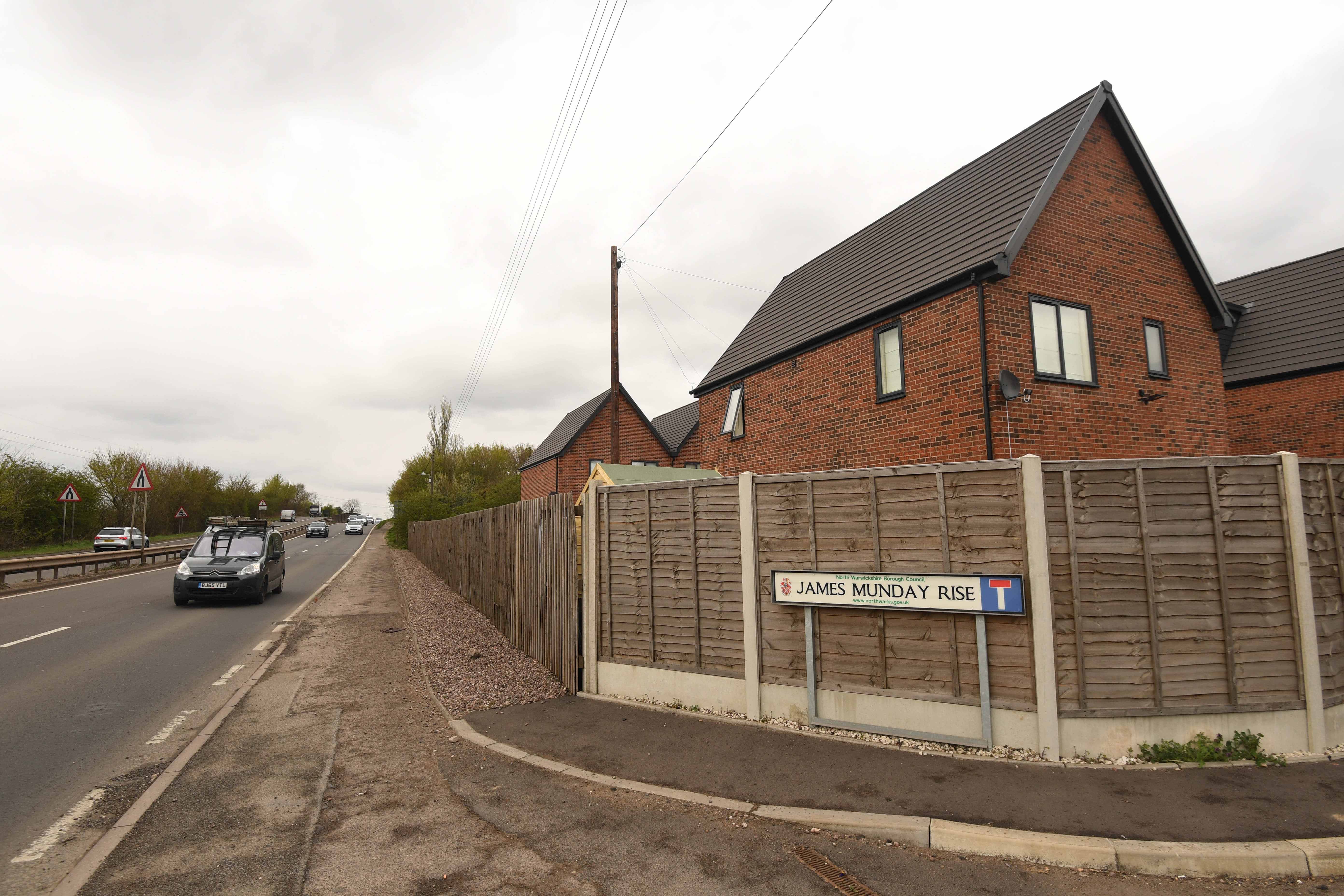 The couple say the ‘disgraceful’ racket of cars on the road starts from 5.30amCredit: BPM 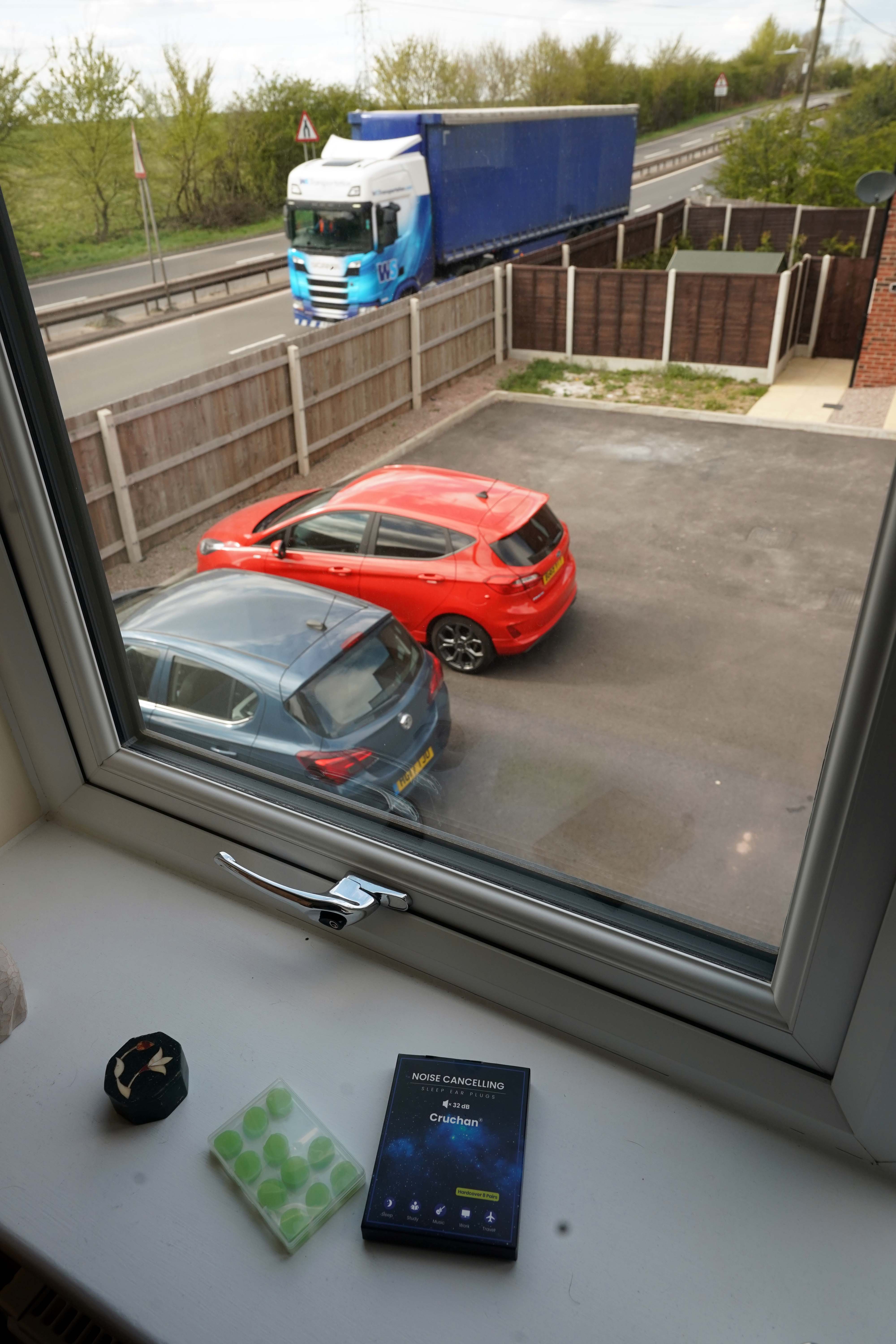 The couple are forced to wear earplugs to block out the noiseCredit: Roland Leon / The Sun

The McCormacks moved from their terraced home in Kings Heath, Birmingham, six weeks ago because they dreamed of living in a detached property.

But they say they didn’t notice the traffic on their Saturday morning viewings as this is “before the road wakes up”.

Critics argue the couple should have instantly realised the impact of living close to a dual carriageway with a 70mph speed limit.

But Jackie, who has accused estate agents of not being forthcoming, said: “I knew it was an A-road but I’m from Birmingham, I don’t know what Coleshill is about.

“It’s a health and safety risk. A lot of people say we should have realised when we bought the house – but you don’t realise until you move in and you experience it.

“We fell in love with the house and we should have paid more attention to what was going on outside. I didn’t realise it was so bad.

“I will put my hand up and say we should have done our homework – but there’s no way this house should be so close to the road.

“I do feel stupid – but I didn’t think it was going to be this bad. I genuinely didn’t.”

The couple have vowed to stay in their new home until the end of the year – but could sell up if their nightmare doesn’t end.

They have to clean their windows four times a week because of dust deposits – and sacked their window cleaner because there was “no point in having one”.

Jackie added: “We always wanted a detached house because we didn’t want the noise. You really couldn’t make it up.”

Of the nine houses built in James Munday Drive, four still remain unsold. The McCormacks is the closest to the A446, which diverts traffic around Birmingham.

Neighbours told Sun Online they were sympathetic to the couple’s plight – but should have done their research.

One said: “Really you should know what the noise is like before you buy a house next to a dual carriageway. We’re set back from the road so it’s fine when we’re indoors.

“But I do feel sorry for them. The noise will be unbearable for them.”

And another said: “When we were looking at houses it was obvious that their house was the one to avoid.

“Besides the noise, if a lorry has a tyre blow-out and comes off the road there won’t be anything left standing.

“It’s so close to the road – it’s astonishing there’s not even a crash barrier.” 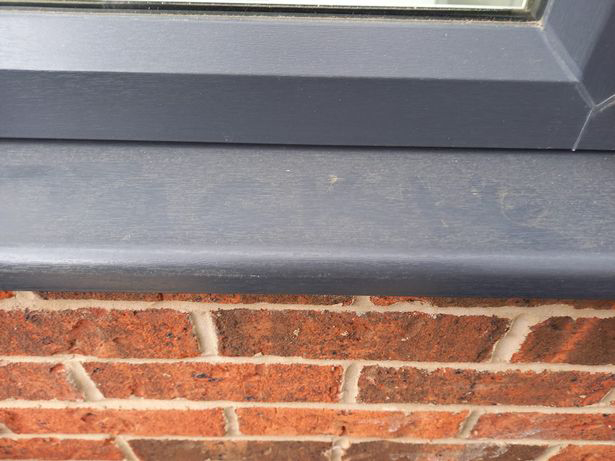 Jackie said she has to clean her windows three or four times a weekCredit: BPM

The couple are campaigning for the council to install barriers and cut the speed limit so their grandchildren can play in the garden safely.

They want to see better soundproofing put in place to shield them from the noise.

A spokesman said: “A meeting is currently being arranged with various stakeholders to discuss this.

“Obviously, there is no guarantee that it will be possible to provide any measures, but we will consider the issues raised very carefully and aim to recommend possible solutions.”

Jackie previously told Birmingham Live she “wouldn’t have touched the house with a barge pole” had she known about the noise.

She also said the pollution is so bad she can write her name in the dust that covers her en-suite bathroom.

Jackie said: “If the pollution is going onto our windows and our cars, what are we breathing in?

“My garden’s a no-go area and I think it always will be, unless they reduce that speed, it’s too much of a danger. I wouldn’t allow my grandson to play outside, it’s too scary.

“It’s the speed at which the juggernauts go past, it’s the speed of the racers, they’re doing wheelies, it’s absolutely shocking.”