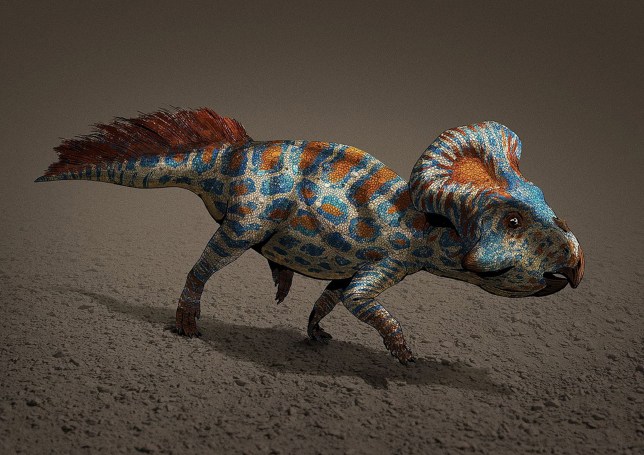 The collar, not seen in this artist’s impression, was used for sexual selection (Photo: PA)

Roaming what is now Mongolia’s Gobi desert, the protoceratops had elaborate bony frills that extended over its neck.

The plant-eating dinosaur was around 1.8m long and lived more than 70 million years ago.

It is thought that the frills may have served to protect the vulnerable neck from predators and helped regulate body temperature but experts now believe it may have had another function: attracting mates.

Sexual selection is the idea that certain traits in animals are favoured by members of the opposite sex, so in time, these characteristics become more dominant in the creatures. 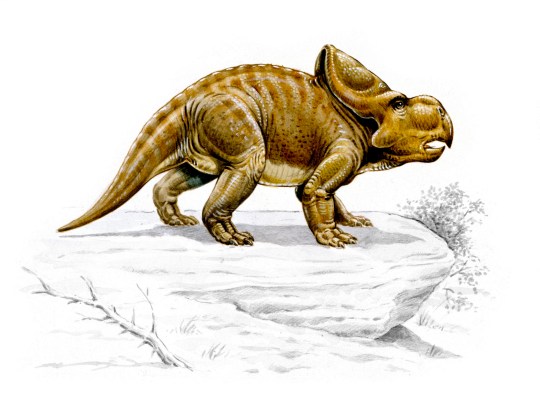 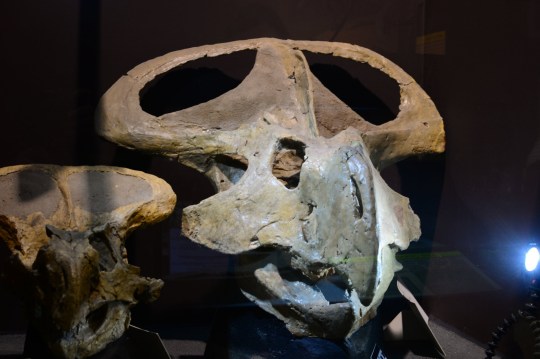 The findings were based on analyses of 30 protoceratops skulls. (Photo: PA)

For example, the elaborate feathered display of peacocks are thought to be a result of sexual selection.

Dr Andrew Knapp, a postdoctoral researcher at the Natural History Museum, said: ‘In many fossil animals we have unusual structures and traits which aren’t really seen in living animals today.

‘Protoceratops didn’t have any horns but they still had a huge frill.

‘Several theories have previously been suggested for the emergence of these neck frills.

‘Some have suggested that they were used for protection, others that they played a role in cooling the large herbivores down, or that they allowed individuals to recognise different members of their own species.’

Dr Knapp and his team analysed 3D scans of 30 complete skulls of protoceratops, which belong to a group of beaked, herbivorous dinosaurs known as ceratopsian. These skulls ranged in size from ‘tiny day-old hatchlings to fully grown adults’. 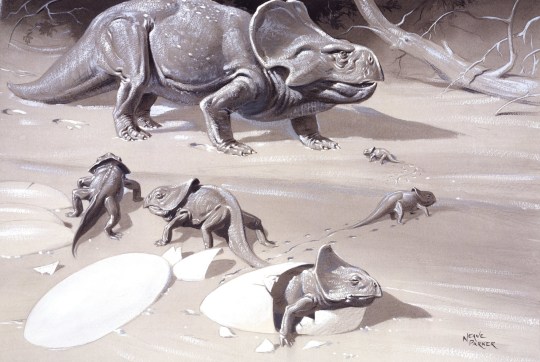 Many dinosaurs had methods of sexual selection unknown to scientists today (Photo: PA)

The researchers found that the protoceratops skulls showed a distinct pattern of growth, suggesting the neck frills were a sexually selected feature, much like the antlers of a deer.

Whilst sexual selection appears to be in action in the protoceratops fossils, the experts said there is no obvious evidence of sexual dimorphism – where the two sexes of the same species exhibit different characteristics beyond the differences in their sexual organs – although this characteristic may have been present in the creatures.

Dr Knapp said: ‘There almost certainly were differences between males and females but quite often differences are in body size, so males will be bigger than females or vice versa.

‘It could also have been through something else like colouration, which doesn’t preserve in fossils.’