The mum said her three-year-old girl, had never been ‘so poorly’ after falling ill last Monday (Picture: PA / Facebook)

A little girl has been left so ill her mum described her as being ‘dead behind the eyes’ after she allegedly contracted salmonella from a Kinder Surprise chocolate egg.

The mum, whose family is understood to live in Dorset, said her three-year-old girl, had never been ‘so poorly’ after falling ill last Monday.

In a Facebook post that had been shared hundreds of times, the worried mum claimed it had been confirmed that her toddler had contracted ‘salmonella from the Kinder chocolate she ate on Sunday’.

Confectionary giant Ferrero last week recalled a range of Kinder products in the UK and other European countries after the treats, including Kinder Suprise Eggs, were linked to more than 100 reported cases of salmonella.

A Kinder factory in Belgium thought to be behind the wave of cases has also been ordered to close, with its entire production line recalled.

A spokesperson for Ferrero told MailOnline it was ‘very sorry’ to hear about the little girl’s condition and its ‘sincere thoughts are with her and her family at this time’.

Urging parents to check their cupboards for the recalled treats, the mum said her normally ‘very active baby girl’ had been left ‘lifeless’ after becoming unwell.

‘It’s been absolutely heartbreaking to see my usually fiery, adventurous and very active baby girl be the complete opposite of everything she usually is,’ she said. 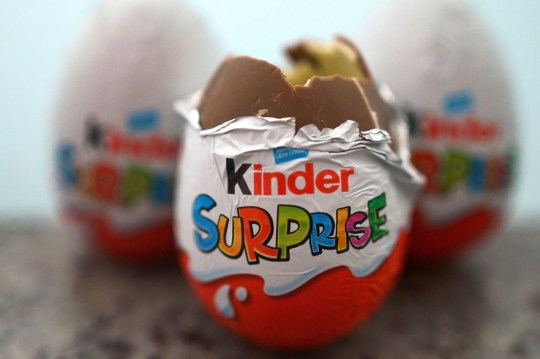 The mum urged other parents to check their cupboards for the recalled treats (Picture: PA)

She explained that because she herself had recently recovered from a stomach bug, she initially thought her daughter had the same illness.

But when the toddler slept ’21 out of the following 24 hours and then kept falling asleep as she was doing things’, the mum became concerned.

She said: ‘I knew something wasn’t right and spoke to the GP who ran through a list of what it could be alongside a hospital visit.

‘I came away thinking she had a viral bug.

‘Fast forward three days and it’s been confirmed she has salmonella from the Kinder chocolate she ate on Sunday.’

She said her daughter had never been so poorly.

‘My god, she’s been poorly a couple of times but this has been something else,’ the mum wrote. 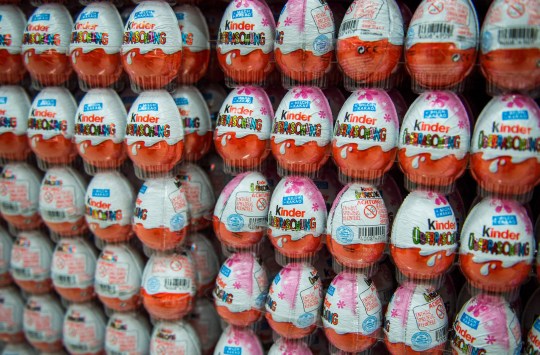 At least 134 salmonella cases have been reported by the European Centre for Disease Prevention and Control (Picture: Ole Spata/ dpa/AFP via Getty Images)

‘She’s been completely dead behind the eyes and so lifeless, it’s been absolutely heartbreaking to see my usually fiery, adventurous and very active baby girl be the complete opposite of everything she usually is.’

The little girl is understood to have started to feel better on Thursday and was ‘able to play for the first time in days’.

But on Sunday the worried mum posted another update saying the illness was still making her little girl unwell.

The mum said: ‘Anyone with little ones who eat Kinder chocolate products, especially the surprise eggs and have products with their best before dates between July 11 2022 and October 7 2022, please please throw them!’

At least 134 salmonella cases have been reported by the European Centre for Disease Prevention and Control, mainly among children under 10 years old since the start of the outbreak.

Sixty-three of those cases were reported in the UK – with 40 impacting children under five, the Food Standards Agency (FSA) said.

A Ferrero spokesperson said the company was ‘very sorry’ to hear about what had happened to the little girl.

‘Our sincere thoughts are with her and her family at this time. We deeply regret this matter,’ they said.

‘We continue to work closely with the food safety authorities to support their investigations.

‘Food safety, quality and consumer care have been at the heart of Ferrero since the company was founded.

‘We are taking every step necessary to preserve the full trust and confidence of our consumers.’

Salmonella, food poisoning caused by salmonella bacteria, is rarely serious and usually gets better within a week.