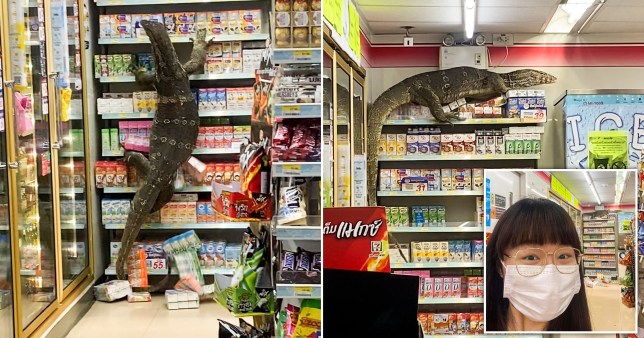 The reptile scattered items all over the floor as it climbed up to reach the top shelf (Picture: Viral Press)

A rampaging monitor lizard shocked supermarket workers in Thailand when he rain inside their store and climbed on top of some shelves.

The 6ft long reptile emerged from a nearby canal and ran into a 7-Eleven store on the outskirts of Bangkok on Tuesday.

It managed to climb up shelves in a corner, knocking several items to the floor in the process, before settling on top.

A few people in the store can be heard screaming in footage of the incident, as staff and customers hid behind the counter.

At first he appears to be trying to open a fridge door, but after raising a tentative claw at the glass, he instead opts to skillfully climb up the shelving – where he is thought to have stayed for a whole hour.

In the footage, he eventually settles near some sort of unit on the wall and close to the lights on the ceiling, with his tongue continually forking out to ‘taste’ the air. In the wild, the animals can climb trees if they are afraid.

A worried assistant at the Nakhon Pathom shop called the police who arrived with reptile handlers to snare the lizard shortly after lunchtime.

One of the assistants explained that help eventually arrived and the reptile was chased it away.

The employee, who said they had been stopped by the chain owner from sharing CCTV of the incident, added: ‘The monitor lizard stayed on the shelf for an hour.

‘The rescue team arrived and chased it away. But they didn’t catch it, it just ran away into the bushes.

‘I’ve never seen a monitor lizard that big in my life, so it was a surprise for one to come in the shop. There’s a forest behind the store so we think it came from there. 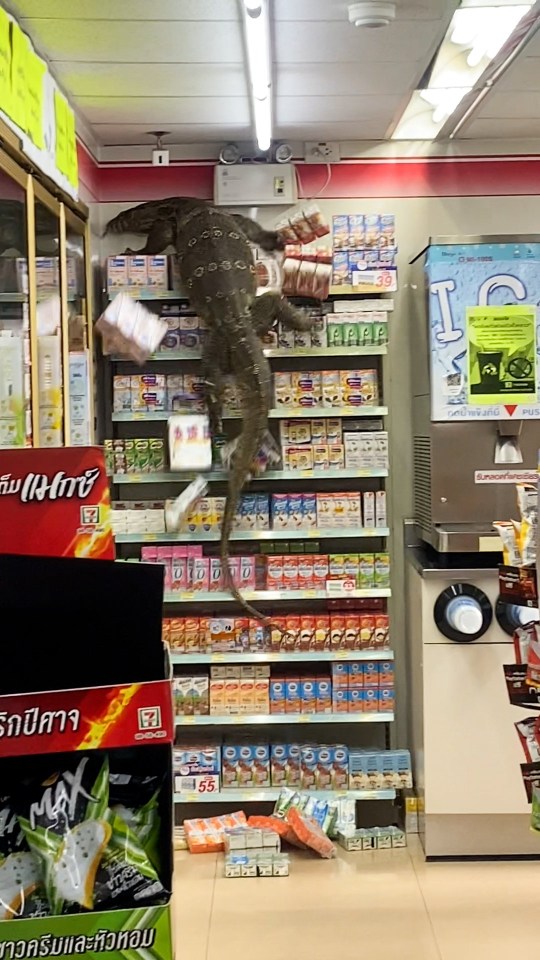 The animal was 6 foot in length (Picture: ViralPress)

‘Lots of news stations have been calling the shop to ask for CCTV but we can’t open the system without the owner.’

Shocked customer Narumpa Tangsin, who recorded a video of the creature, said: ‘I only stopped at the shop to buy some food and then saw the huge monitor lizard inside. I wanted to buy a drink but the animal was too close to the drinks aisle.

‘They’re dangerous animals, especially when they’re angry, so I stayed back and recorded it on my phone. I guess that shops have everything, even for lizards.’

Despite its rampage through the grocery shop, the monitor lizard did not manage to take any food. 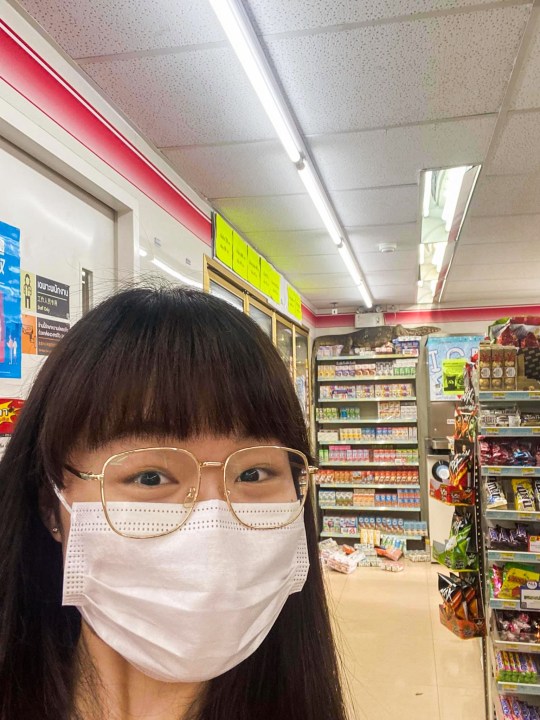 Customers and staff could be heard screaming as the animal climbed up shelves, where it stayed for an hour (Picture: ViralPress)

The unusually large creature may have been struggling to find anything to eat outside, following months of dry weather with little rain.

Asian water monitor lizards live in canals and ponds in large cities in Thailand where they feed on fish, snakes, frogs and scraps of food left by humans.

They can be aggressive when threatened and have a mildly venomous bite which sometimes carries harmful bacteria, but do not tend to attack humans.

Some other types of monitor lizards are kept as pets and are calm around humans when domesticated.