FROM the air, the sheer scale of Dover’s dinghy graveyard is staggering.

Hundreds of discarded vessels that have ferried migrants across the English Channel lie stacked on a patch of industrial ground. 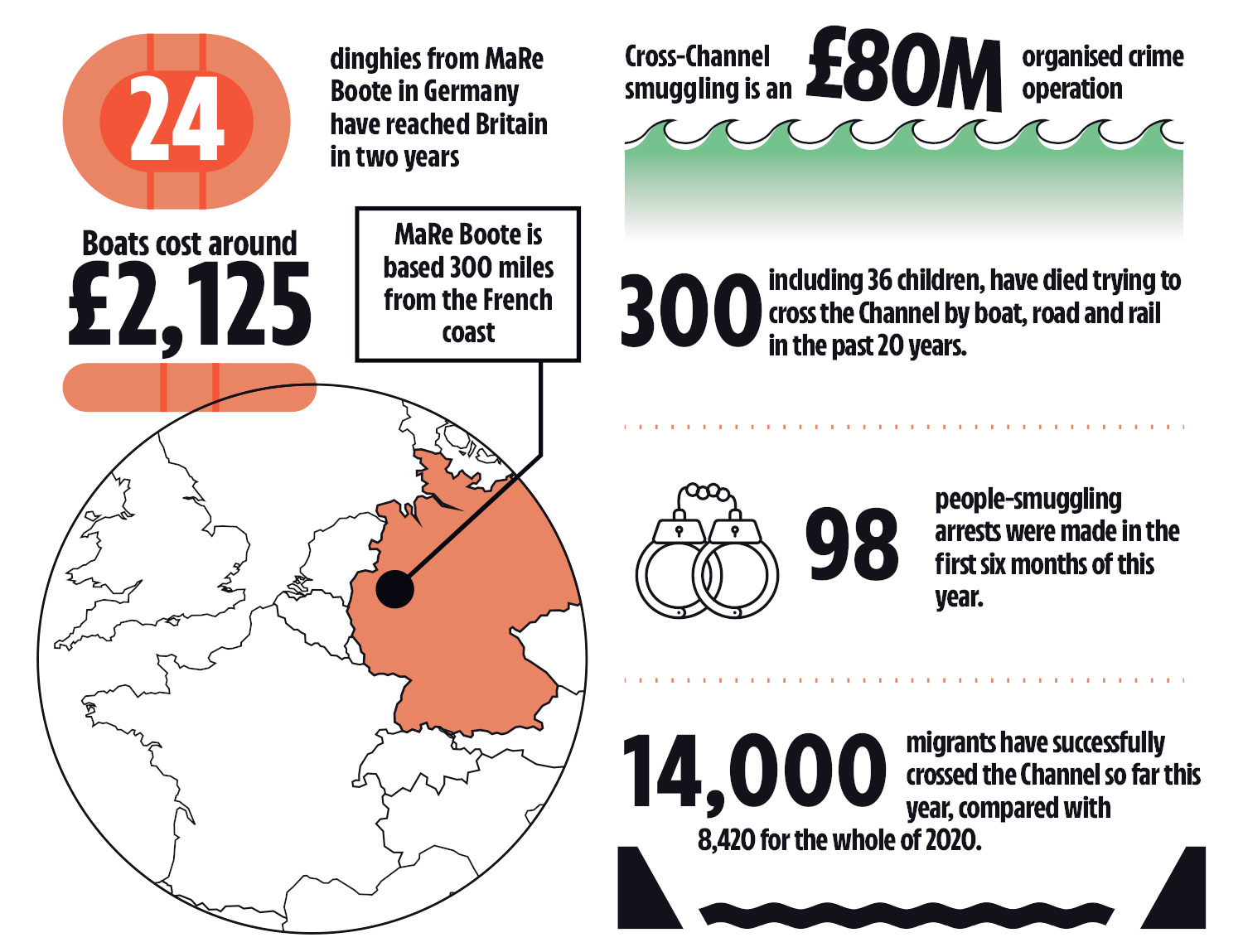 It’s the end point of a lucrative — and deadly — supply chain that today The Sun can reveal stretches 5,000 miles away to the factories of China, via GERMANY.

Last week we told how France has banned the sale of inflatables and kayaks from Channel ports in an attempt to stem the crossings.

But peering through the wire fence at the Dover storehouse, the name stamp on one dinghy revealed the flourishing boat supply line has a German source.

The decrease in motor vehicle Channel crossings during the pandemic has supercharged small-boat people smuggling.

In just three years, the smugglers’ cross-Channel business has developed from a cottage industry into an £80million trans-Continental organised crime operation.

Often gangsters sell places on flimsy, unseaworthy vessels. Almost 300 people, including 36 children, have died trying to cross the Channel by boat, road transport and rail in the past two decades.

Now the German connection has seen migrants use 24 dinghies from one retailer — worth around £51,000 — to reach these shores over the past two years.

The £6million Home Office warehouse at Whitfield on the port’s outskirts is where boats are stored in the hope that they might be used in prosecutions against smugglers.

One large, grey, professional-looking vessel at the compound bore the company name MaRe Boote while another stamp announced it was from its Sharkline range.

Our investigation revealed MaRe Boote was based in a nondescript German industrial unit a five-hour drive — and around 300 miles — from the French coast.

After calling the company, I was asked to put my inquiries in an email. I posed a series of questions including who had made the boat and its cost, its suitability for Channel crossings and if the company knew who had bought that particular vessel.

MaRe Boote owner Marvin Reuter, 30, emailed a one- sentence reply saying that the company “only sells our boats domestically” and has had no contact with people smugglers.

Three weeks later a reporter and photographer covering the migrant crisis for The Times snapped a dinghy-full of migrants apparently lost mid-English Channel.

The boat, with around 20 on board including two children, was zigzagging through the waves as hulking tankers and ferries passed dangerously close.

The migrants, who were from Syria and Iran, shouted to the journalists, asking the way to Britain.

Beneath the men sitting on the sides of the distinctive grey dinghy was the boat company name stamp: MaRe Boote.

After contacting company boss Marvin Reuter again, he agreed to talk and answer queries by email.

German police have told him that in the last two years at least 24 of his boats have been discovered in Britain after being used by people smugglers.

Mr Reuter’s vessels, which cost around £2,125 each and do not have an outboard motor, are sourced in China and have a five-year guarantee.

There is no suggestion that MaRe Boote or Mr Reuter’s Chinese suppliers are doing anything legally wrong or knowingly aiding smugglers. It is only further down the line that criminality is involved.

The business owner told The Sun: “Customers usually pay cash and take the boat away with a car.

“Everyone who comes here tells me his name and address. It is a completely official purchase.

“I have no way of knowing if a customer wants to transport immigrants or if he wants to use it himself. I have no idea how the smugglers get my boats.”

Speaking from his premises at Werne — 13 miles north of Dortmund — Mr Reuter added: “The police told me the people who buy the boats from my company are not the ones who use them.

“The guys sell it many times in Germany, then the boat goes to another country before it goes to the bad guys. It’s very difficult to catch the bad guys.”

He points out that while they are designed to carry up to 18 people, they are supposed to be used just two miles from the shore, rather than crossing the world’s busiest shipping lanes of the English Channel.

German police say Mr Reuter is not being investigated for any wrongdoing. Chief Detective Vera Howanietz, from the local Kamen Police, told The Sun: “A local boat manufacturer also sells boats, which he is allowed to do, and often his boats end up being found in places such as England.

“This would be like if somebody buys a Mercedes and does something in another country which is wrong. The Mercedes seller can’t help that.”

They say “specialised shops” in Germany and the Netherlands are used to source dinghies and outboard motors.

BKA spokesperson Nina Jürgens told The Sun: “In principle, the purchase of boats is not a punishable offence in Germany.

“Under German law, smuggling outside the EU is not punishable. Since the UK has left the EU, this now also applies to the UK.”

Germany is not only a source of Channel dinghies but also a way station for migrants themselves. One law enforcement official told The Sun that 60 per cent of migrants only step foot on French soil shortly before attempting the Channel crossing.

Under German law, smuggling outside the EU is not punishable. Since the UK has left the EU, this now also applies to the UK

After crossing the EU’s eastern border, often via Turkey, the migrant trail for many leads through Germany then Belgium or the Netherlands to the shores of the English Channel.

They then fan out across the 125-mile stretch of rugged French coast of sand dunes, marshland and thick scrub between Dieppe and Dunkirk. Organised crime gangs then co- ordinate simultaneous launches up and down the coast.

They also use decoy groups of migrants to visit beaches to lure in French police and then launch dinghies elsewhere.

Smugglers have recently begun sending out boats spread throughout the day to bamboozle cops’ shift patterns, The Sun can reveal.

Boats were once launched after midnight in a five-hour window. Now the launches continue until 11am — covering three different police shifts rather than the previous one shift.

The National Crime Agency (NCA) — Britain’s equivalent of the BKA — says it is working closely with its European counterparts to take out the smuggling gangs.

In June the NCA — through its Project Invigor organised immigration crime task force — helped jail three leaders of a people-smuggling gang in Belgium.

Police there stopped a stolen German vehicle near the French border and found it to contain a dinghy, an  outboard engine, 11 life jackets and three jerry cans of petrol.

NCA deputy director Andrea Wilson says her officers have made more than 98 arrests relating to the organised immigration threat in the first six months of this year.

The crime fighter said: “We work very closely with our German counterparts to tackle the threat.

“We look at investigations where we may have an opportunity to disrupt that boat supply. But we shouldn’t forget buying a boat isn’t a criminal offence so there are some challenges in terms of what we can and can’t do.”

One of the UK’s most senior experts in covert policing, the deputy director said that no one group has cornered the cross-Channel smuggling market. The investigator added: “There is no nationality that is dominant.

“We see a whole variety of nationalities arriving on the boats — Eritreans, Vietnamese, Albanians, Iranians, Iraqi Kurds. And that applies to organised crime groups behind it.”

Back in Dover the dinghy graveyard is overflowing. More than 14,000 migrants have crossed the Channel since January, compared with 8,420 for the whole of last year.

Officials appear to have opened a second storage area to cope with the influx of discarded craft at the Home Office complex.

A stark testament to the sinister efficiency of the people smugglers. 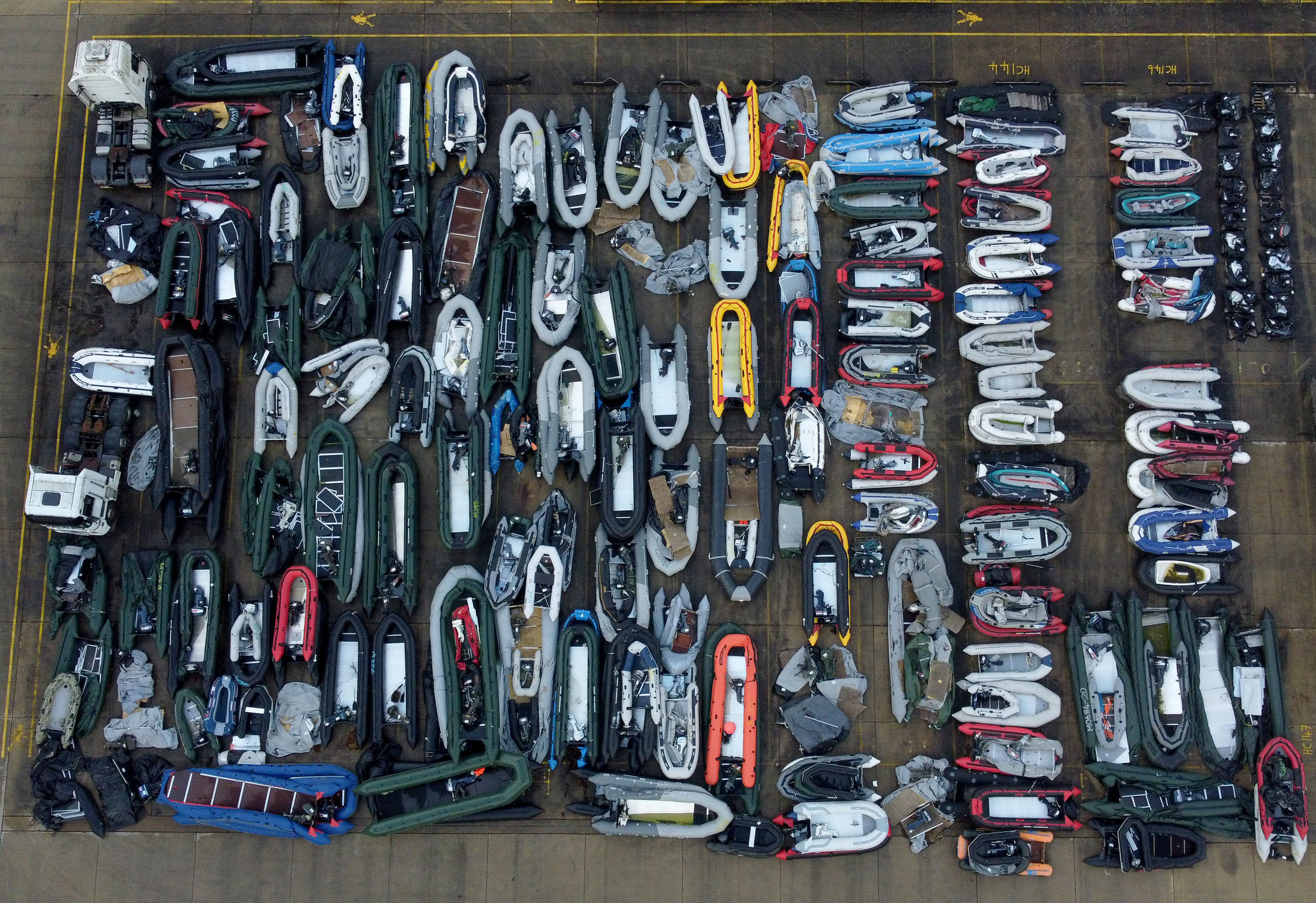 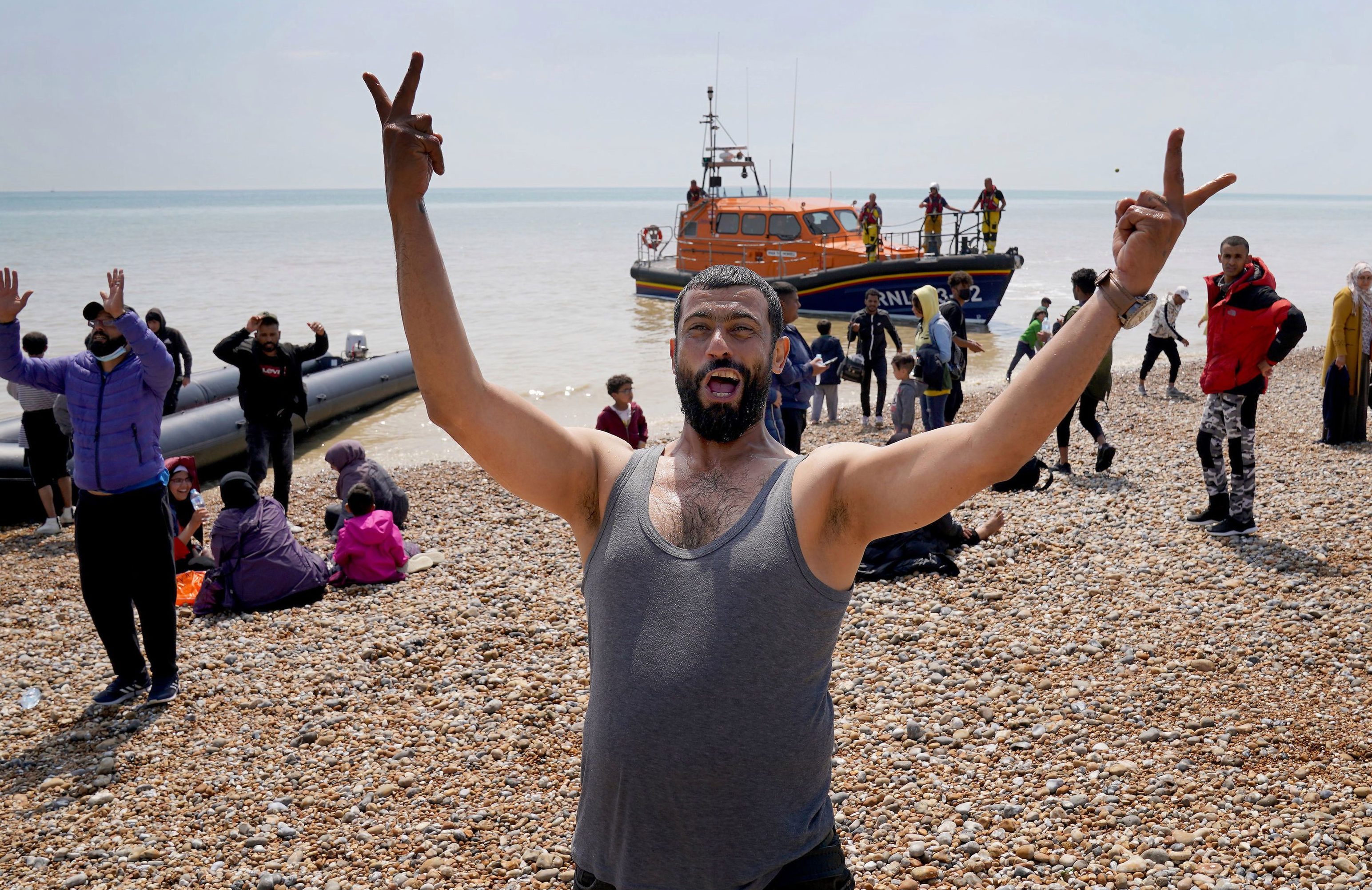 A man waves as he walks up the beach in Dungeness, KentCredit: PA 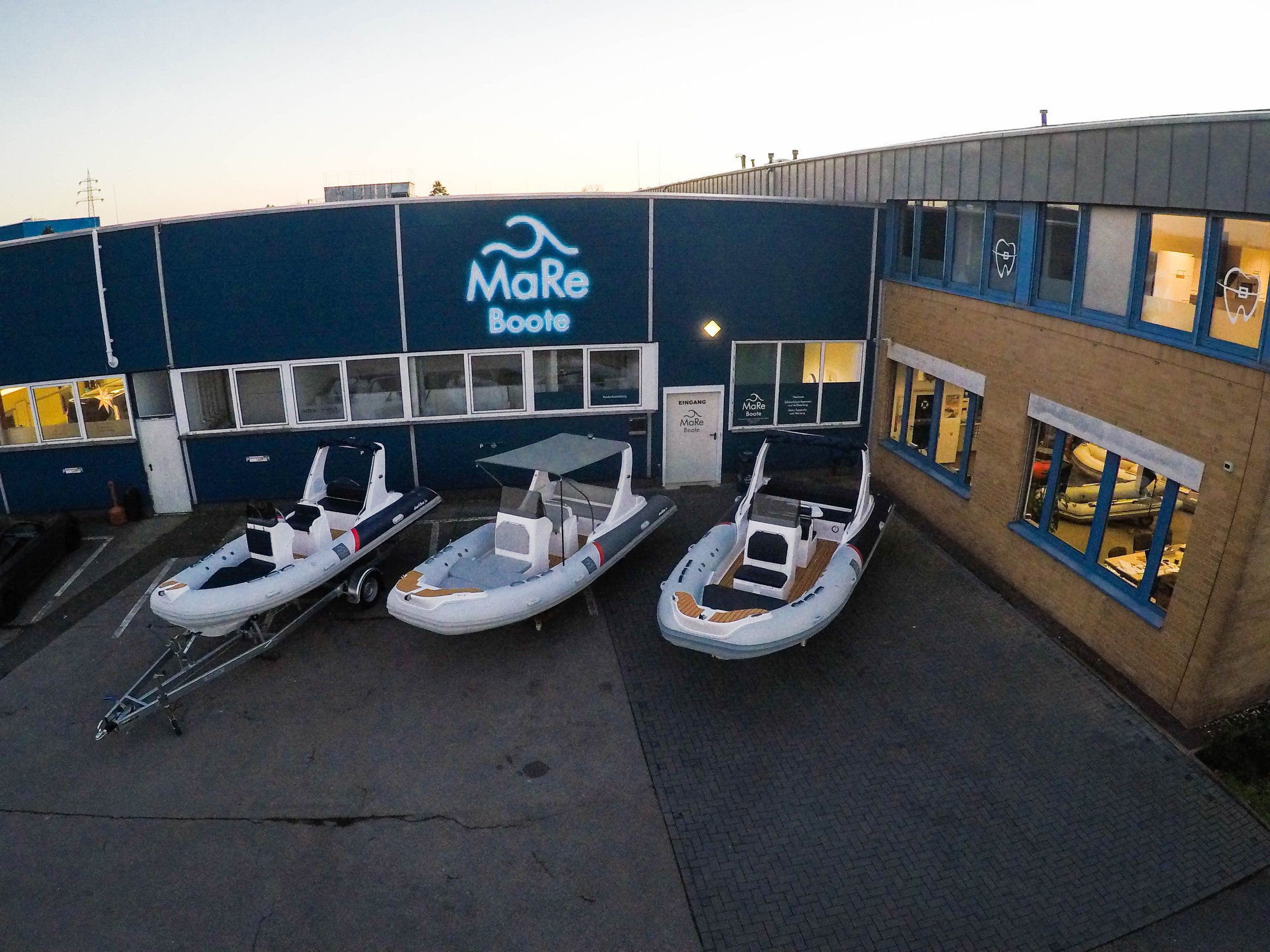