Wrangler Hendrix died after getting stuck between a washing machine and dryer in a relative’s home (Picture: Google/Bowers Funeral Home)

An 8-year-old boy died after getting trapped between a washing machine and dryer while playing hide and seek at a relative’s home.

Wrangler Allen Hendrix was discovered ‘wedged between a washer and dyer’ by family members, according to police. He was visiting his relative’s home in Coolidge, Georgia, with his grandparents and was playing the game with his cousins.

Family members immediately administered CPR on him and called police around 6.15pm on Friday as he was ‘unresponsive’. Wrangler responded to the resuscitation attempts only briefly, Thomas County Sheriff’s Office Cpt Tim Watkins told People. Authorities believe Wrangler was trying to hide between the two machines when he got stuck.

Wrangler was transported to Archbold Memorial Hospital in Thomasville, Georgia, where he was pronounced dead shortly before 7.30pm. 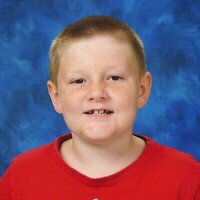 ‘The Thomas County Sheriff’s Office would like to express our deepest condolences to the family of Wrangler,’ said Watkins.

Law enforcement officials believe Wrangler died from positional asphyxiation. An official autopsy was scheduled to be performed on Wednesday.

Wrangler, of Jewett, Texas, was a second grader and the son of Rhonda White and William Andrew Hendrix.

In an online obituary page for Wrangler, a person in the school community described him as a ‘sweetheart’.

‘So thankful for time I got to be his bus driver. He was so well-mannered and took care of his sister,’ Judith Engleman wrote. ‘They were so excited about their trip and the beach. We joked about wearing lots of sunscreen as they got off the bus. Rest in heavenly peace, Wrangler.’

Engleman wrote, ‘My heart breaks for all of you. Praying for peace and comfort for you during these dark days.’

Another person who commented on the online obituary, Jo Cunningham, wrote: ‘I’m so sorry this happened. I can’t imagine the pain. He’s now playing hide and seek with the angels. God Bless you all.’

Wrangler’s funeral will be held on June 21 at 2pm at Sardis Baptist Church in Jewett.