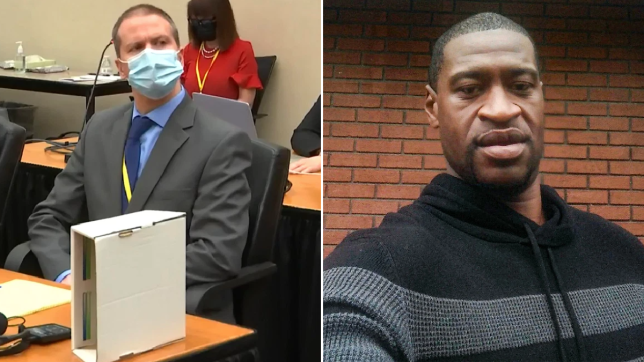 Derek Chauvin, left, was behind the death of George Floyd and not a synthetic painkiller called fentanyl later found in his system, Chauvin’s murder trial was told Monday (Pictures: AP)

George Floyd’s screams of ‘mama,’ and ‘I can’t breathe’ prove he was killed by police and not by drugs found in his system, a court heard. Speaking at alleged murderer Derek Chauvin’s murder trial on Monday, prosecutor Jerry Blackwell said the manner of Floyd’s May 2020 death was completely at odds with the drugs in his system.

‘Why? Because you’ll be able to look at the video footage and you will see that he looks absolutely nothing like a person who would die from an opioid overdose.

‘You will learn that opioids are tranquilizers. And when a person dies of an opioid overdose, what do they look like? First and foremost, asleep, in a stupor. And they’re never come to again, and they simply pass away. 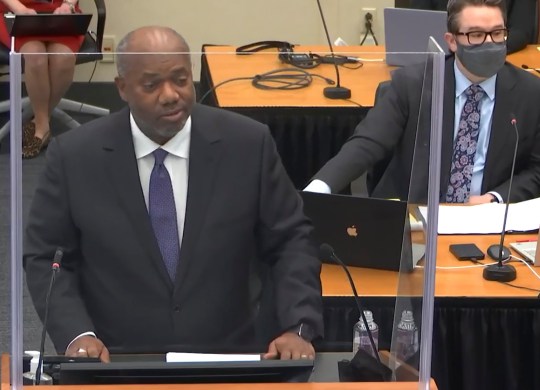 Prosecutor Jerry Blackwell, pictured, said Floyd’s consciousness and panic as he died were completely at odds with someone suffering a fentanyl overdose (Picture: Reuters)

‘They’re not screaming for their lives, calling for their mothers, begging please please I cannot breathe. That’s not what an opioid overdose looks like.’

Attorneys for Chauvin claim Floyd died because of 11 milligrams of synthetic painkiller fentanyl found in his system during an autopsy.

Blackwell insisted on Monday that Floyd had a ‘tolerance’ for the drug, and that it was not the cause of his death.

The prosecutor had earlier told jurors how a 911 operator who watched a livefeed of Floyd’s death was so disturbed by what she saw that she called 911.

Scurry’s call was revealed by prosecutor Jerry Blackwell as he opened the case against Chauvin, 42, on Monday. Blackwell told jurors of how Scurry had watched Floyd’s botched arrest unfold, saying: ‘You will learn that what she saw was so unusual and so disturbing she did something she had never done on her career. She called the police on the police, a 911 dispatcher.

‘She found it just that disturbing. She felt she saw a man literally lose his life.’ Scurry is one of several witnesses who will be called by the prosecution during Chauvin’s second and third-degree murder trial. He denies all charges.

Jurors were shown the full clip of Floyd’s death as the trial opened on Monday morning, with the security guard heard to cry ‘I can’t breathe’ as Chauvin knelt on his neck.

Blackwell condemned Chauvin and said the former Minneapolis Police Department officer had ‘betrayed (his) badge when he used excessive and unreasonable force upon the body of George Floyd.’

The prosecutor continued: ‘You will learn hat he put his knees upon his neck and back, grinding and crushing him until the very breath, until the very life was squeezed out of him,

‘You will learn he was well aware Mr Floyd was unarmed, had not threatened anyone, was in handcuffs, was completely in control of police, was defenseless.

‘You will learn what happened in those nine minutes and 29 seconds when Derek Chauvin was applying that excessive force to the body of George Floyd.

Blackwell continues to open the case against Floyd, with witnesses set to be called later on Monday.

Floyd, a 46 year-old security guard, died after being arrested for allegedly trying to pass a fake $20 bill at a Minneapolis convenience store last July.