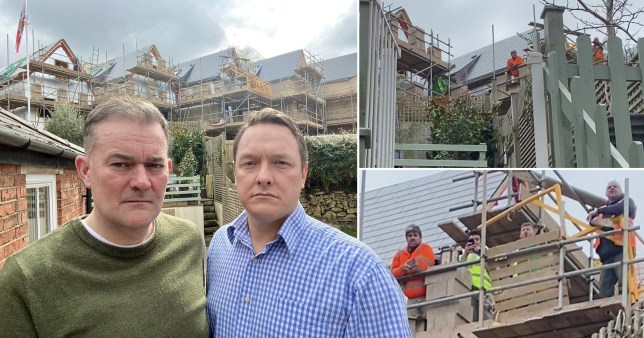 John Copley-Hammond (left) and his husband John were taunted by builders in their own back garden (Picture: SWNS)

Police are investigating footage of a gay couple appearing to be subjected to homophobic slurs, songs and threats of violence in their own home.

Chris Copley-Hammond and his husband John, both 49, say they have been left frightened by builders working next door, who threatened to put a brick through the front window of their house.

The couple, who have two young sons, said the abuse escalated over months in Stroud, Gloucestershire, before cement appeared in their garden and they challenged the workmen.

A construction crew for the new housing development – which has been in the making since May – began making increasingly abusive comments while working on scaffolding which overlooks John and Chris’ garden, the couple claimed.

They said the abuse included homophobic slurs such as ‘fags’ and ‘fudge’.

But the situation deteriorated last week when Chris filmed the builders singing along to Stevie Wonder’s ‘I Just Called To Say I Love You’ on the radio – but instead loudly saying ‘I just called to say I’ll bum you’ – while Chris and John were out on their patio.

After laughing, one of the builders can then be heard calling to another: ‘Yeah, get some fudge.’

Then on Monday, when John went outdoors to ask the builders about some cement that had appeared on the couple’s patio, the builders began to hurl abuse at him.

They deny the accusation and launch into a foul-mouthed tirade, branding John a ‘dirty little pervert’ and a ‘paedophile.’

One then tells him: ‘come out the front then’ and while holding a brick adds: ‘I’ll f***ing smash one of these through your window you c***.’

Another adds: ‘He will.’ 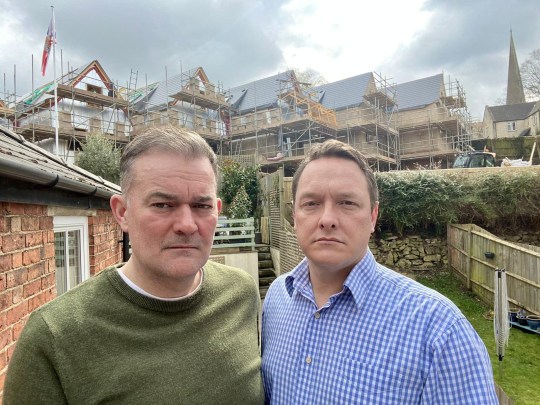 John and Chris reported the builders to the police (Picture: SWNS)

John then tells the group he is going to press charges but is targeted with further abuse.

One of the builders then labels him a ‘f***ing bummer.’

The victim then films the cement covering his garden furniture and table and labels them a ‘disgrace’ while vowing to get them all fired.

One later adds: ‘I want to smash your head in.’

Property developers Bales Homes Ltd. have apologised for the ‘regrettable’ incident – and say the individuals involved were subcontractors and have been removed from the site. 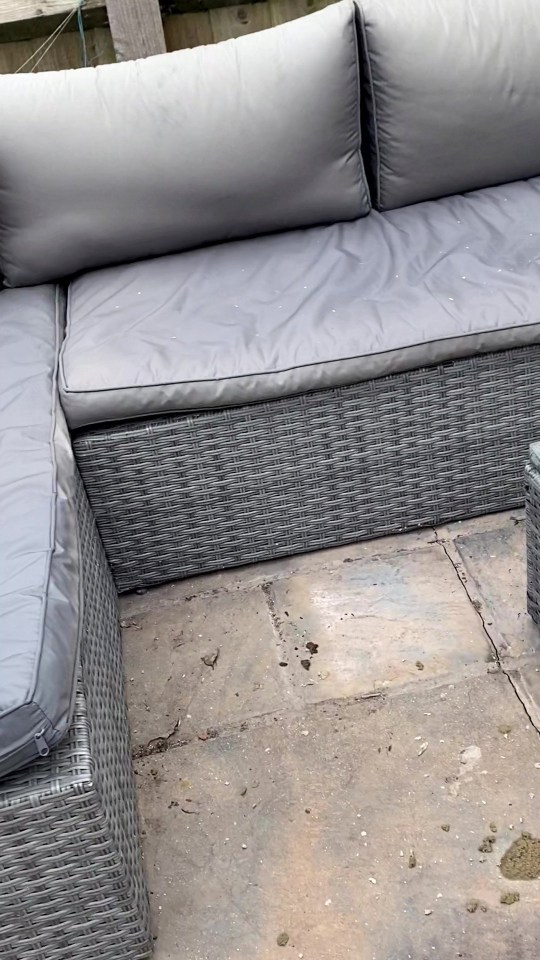 Cement appears to have been thrown in the couple’s garden (Picture: SWNS)

But they refused to name the subcontracting company involved.

John said: ‘We’ve been left really frightened. I wasn’t sure whether to report it to the police, but it is a hate crime. We can’t live like this in our own home.’

Chris added: ‘It’s really quite upsetting – we’re both 49 years old now, but we were both bullied at school, and it does bring up those feelings again.

‘A lot of the comments they have made are ridiculous homophobic things that were said as slurs in the 70s.

‘To hear stuff like that in this day and age is just unbelievable.’ 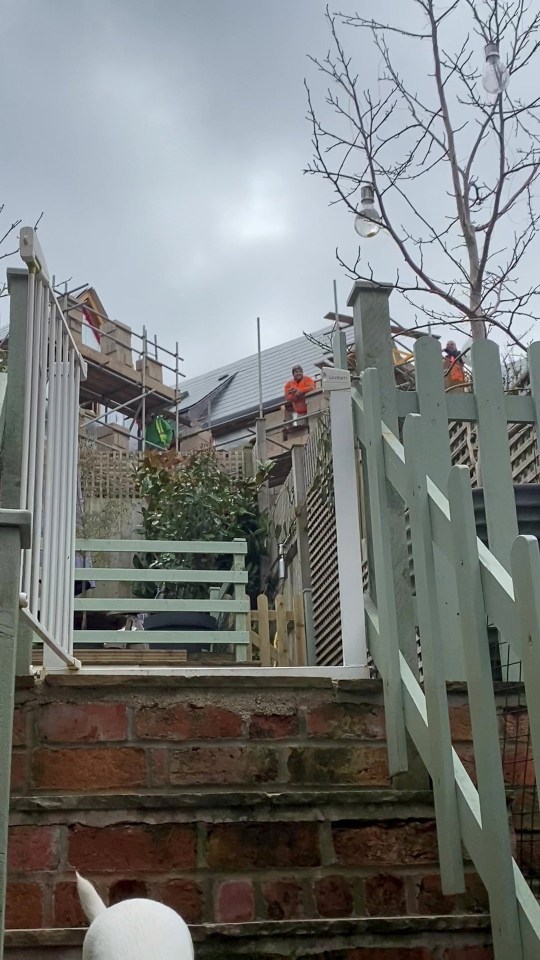 The workmen have kept up the abuse for some time, the couple say (Picture: SWNS)

The couple believe that the intimidation has built up as a result of them opposing a proposed change by property developers Bales Homes to increase the height of the 12 houses in the new development.

The couple moved to Stroud eight years ago because of its reputation as an ‘accepting’ town and say they founded the first Stroud Pride group three years.

They also praised the general community for being welcoming and accepting.

She said: ‘In the 21st century it is unacceptable that this sort of homophobic abuse is still in our society.

‘No-one should have to put up with it, particularly not in their own home. The law protects gay people from such abuse.

‘I hope the police will thoroughly investigate what has happened, and if they find sufficient evidence an offence has been committed they should ensure charges are brought.’

Gloucestershire Police said: ‘We received a report of homophobic comments being made towards a couple in Stroud.

‘We have spoken to the victims and are currently investigating.’

Lee Bales, managing director of Bales Homes, said: ‘Bales Homes are very sorry this has happened. It’s a regrettable situation and we feel sorry that the situation arose in the first place.

‘Unfortunately the individuals involved were subcontractors.

‘As soon as we were informed as to what was happening, we complained to the Director of the subcontracting company and had the individuals removed from the site.

‘Bales Homes have taken this complaint very seriously as the views expressed are not our own, and we will make sure it doesn’t happen again.’