A FURIOUS woman threatened to bust-up her neighbour after the Covid-infected mum handled the other’s Chinese takeaway when it was sent to her house by mistake.

Kim Robson was waiting for her takeaway when she spotted her neighbour ranting on Facebook that the restaurant had taken the “contaminated” meal off her to pass on, rather than cook a new one. 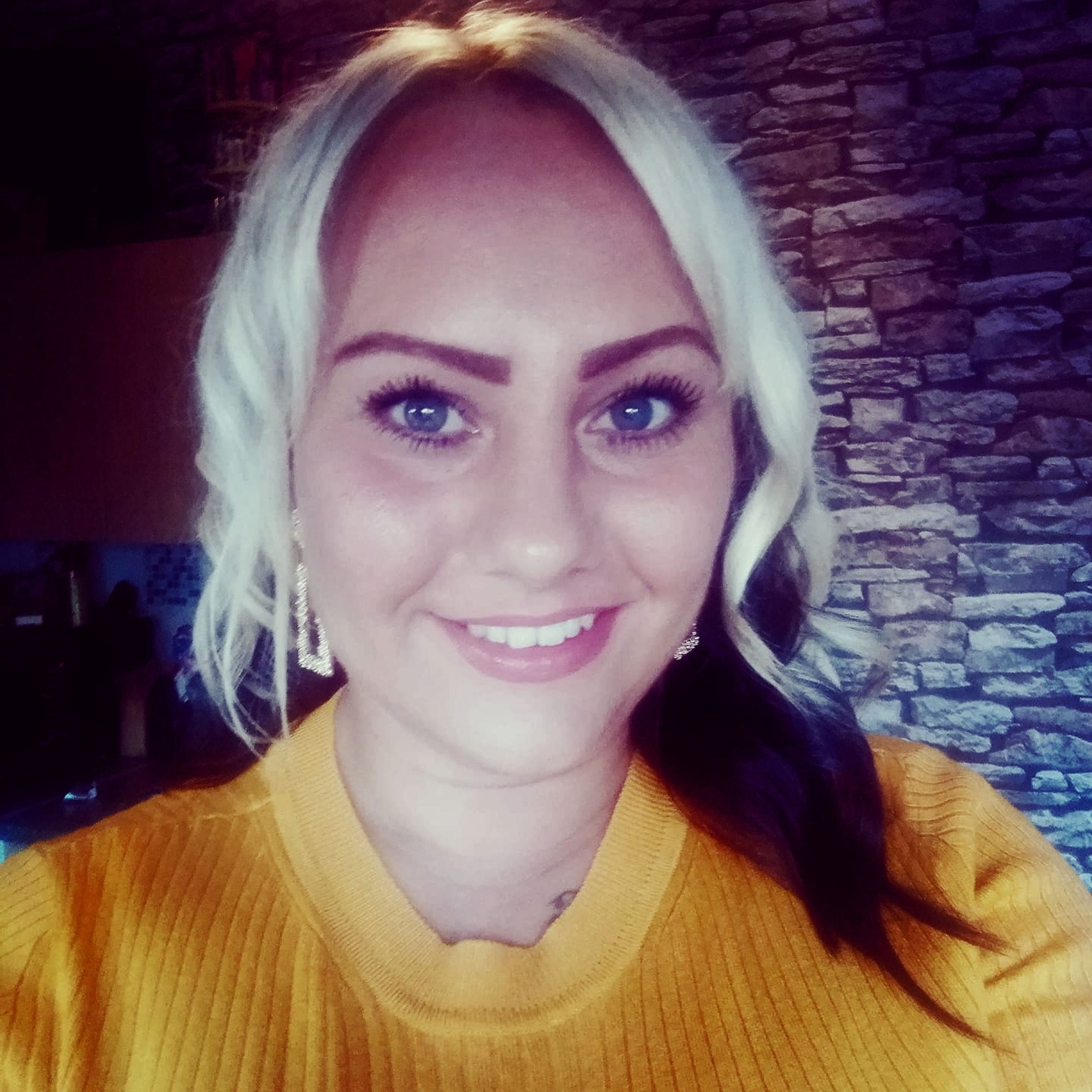 Lauren Marshall threatened to fight her neighbour Kim after getting into a row over a mix-up with a Chinese takeawayCredit: Kennedy News / Lauren Louise Marshall / Facebook 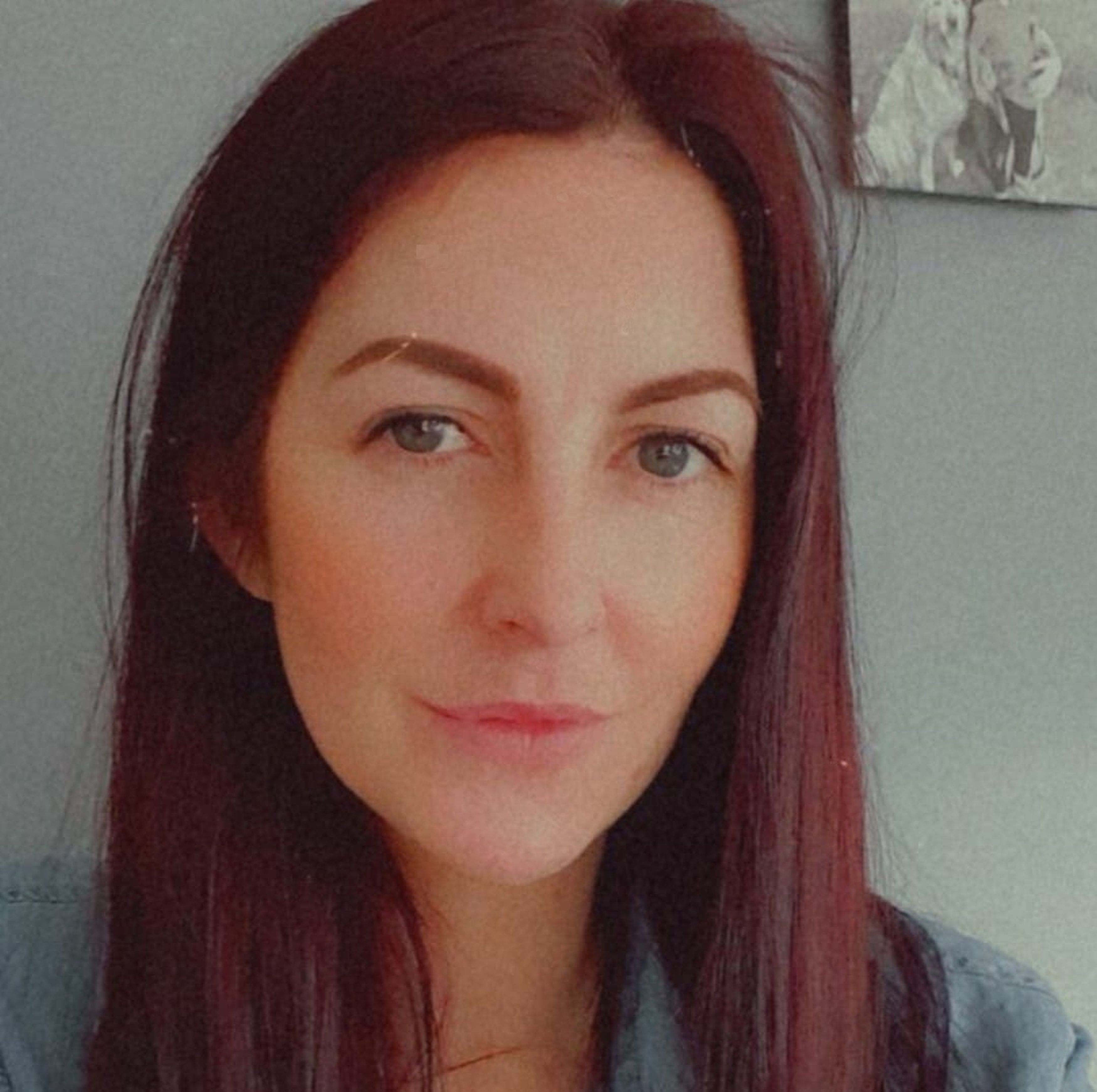 Kim Robson was waiting for her meal when she saw Lauren’s Facebook post saying she’d handled the takeaway while having CovidCredit: Kennedy News / Kim Robson / Facebook 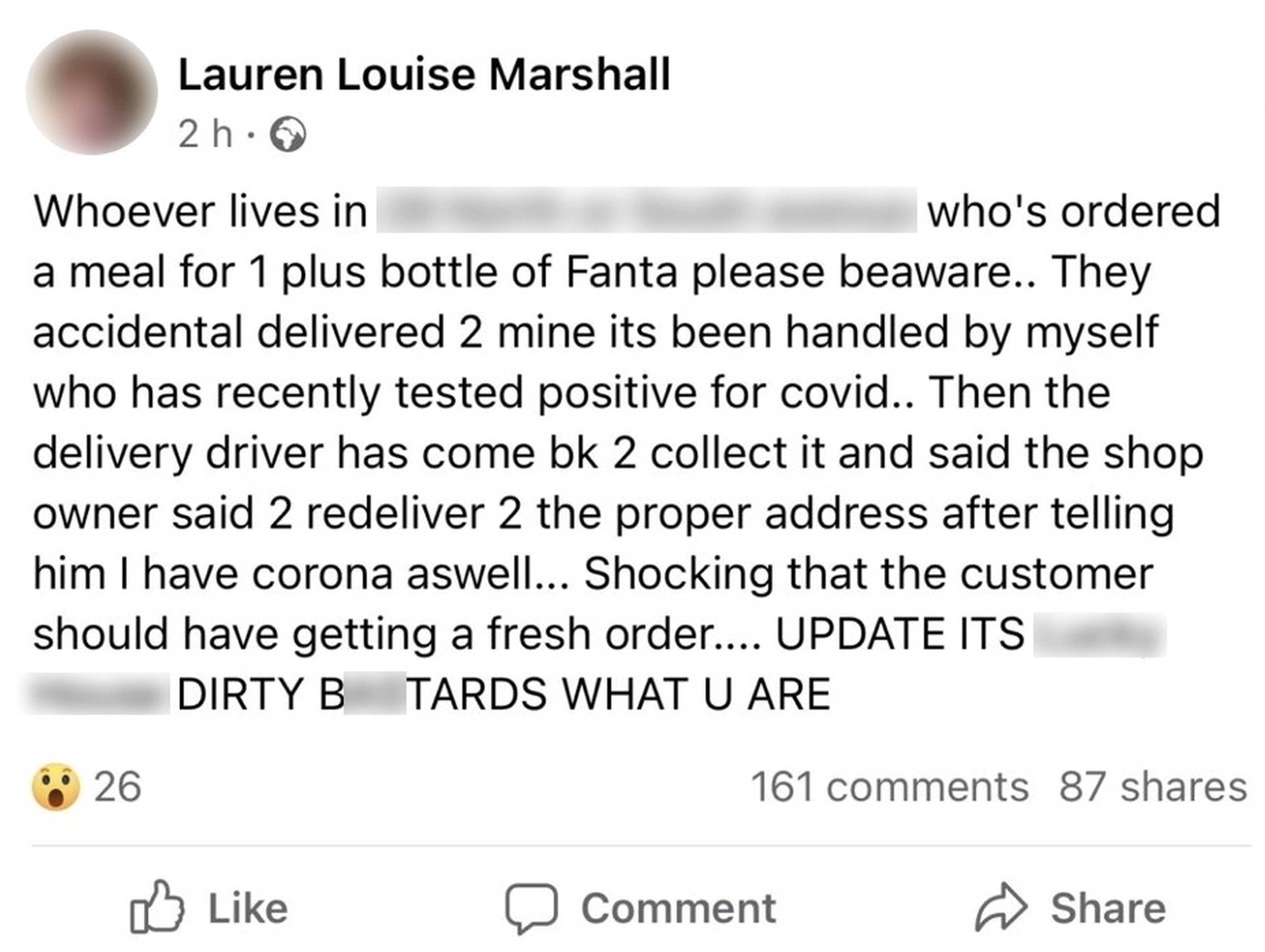 Lauren posted that the driver re-delivered the ‘contaminated’ food to Kim Credit: Kennedy News and Media

In the post, Covid-positive Lauren Marshall blamed the takeaway in Sunderland, Tyne and Wear, for mistakenly dropping it at her doorstep before returning to take it off her.

However, 36-year-old Kim jumped online to slam Lauren for still “putting her at risk of Covid” – claiming she shouldn’t have touched the food at all.

Furious Lauren tried to defend herself, believing she’d done Kim “a favour” and told her not to “start with her sh*t” as it was the second time her takeaways had come to the wrong house.

The enraged mum-of-three then launched into a tirade of menacing replies telling Kim she was “lucky she had Covid” or she would “burst through her door and burst her lips right now.”

Her post claims she told the delivery driver she’d tested positive for the virus when she passed the order back, but Kim says the driver said he was not made aware.

Lauren even boasted she kept a bottle of Fanta from the order to “mix with her vodka” and also insisted she hopes the takeaway workers “get Covid.”

Screenshots of the furious exchange have gone viral on Twitter with more than 83,000 likes – with hundreds of users mocking the pair’s heated disagreement.

One user, David Matcham said: “Good grief! Do people actually behave like this?” 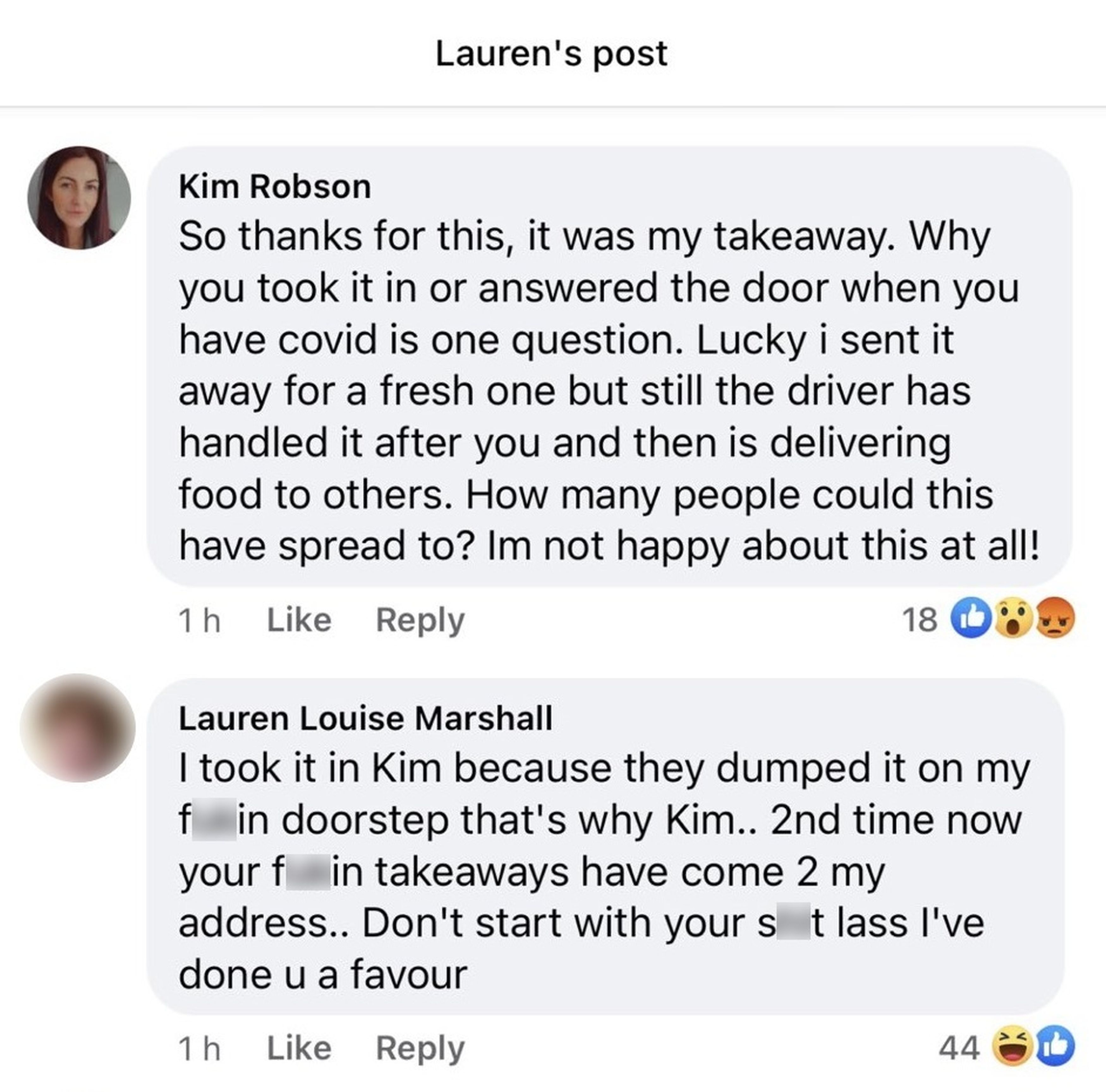 Lauren insisted she had ‘done Kim a favour’ by taking the takeaway Credit: Kennedy News and Media 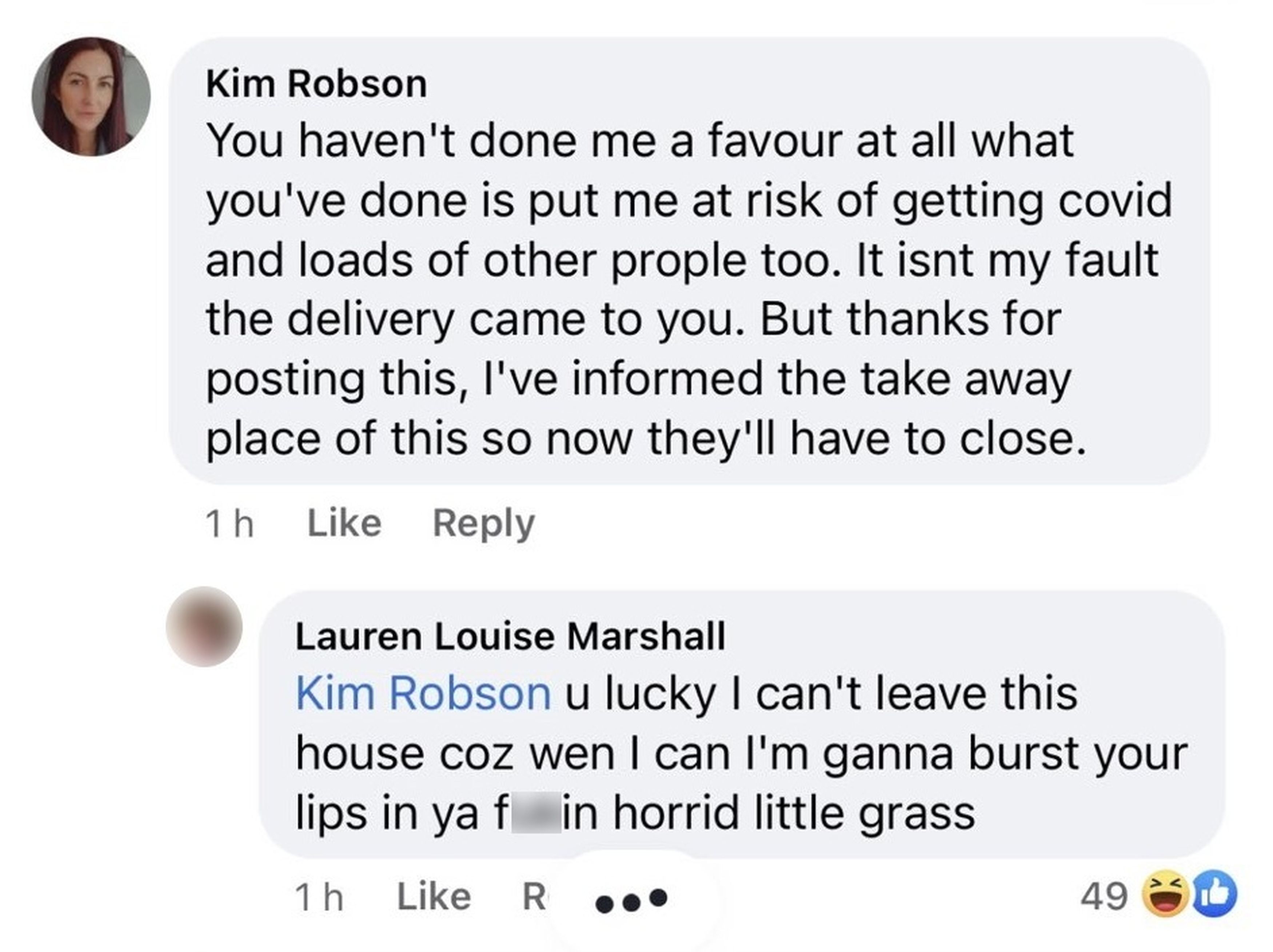 “I’ve lost a close friend recently to coronavirus and it really scares me, so I just thought it was stupid when she’s saying that she’s done a good thing, but it didn’t feel like it at the time.

“I said thank you for sharing the post and then I expressed my concern and she just went wild and I was quite nervous about what was going to happen next.

“We live quite close to each other so it was quite possible that she was going to knock on my door.

“The driver tried to bring the parcel to my house and you could tell it’d been opened.

“The driver said he had to go and get another bottle of pop because [Lauren] used it for her vodka.

“When I told the takeaway company about it they were quite upset and said she hadn’t told them she had Covid, otherwise they wouldn’t have tried to take it from her.

“I don’t think she intended to put me at risk and I do think she was genuinely worried about passing the virus on, but at the same time I think she should have thought about it more.

“I didn’t want to fall out over it.

“Maybe she shouldn’t have touched it at all, and if she had taken it in don’t give it back to the delivery driver knowing you’ve had coronavirus.”

Kim says the restaurant delivered her another Chinese takeaway shortly after she’d told them about what happened – which she says she still enjoyed despite the row.

She also went on to reported Lauren’s Facebook comment to police, and they’ve since confirmed they’re investigating the incident.

A Northumbria Police spokesperson said: “We can confirm we have received a report of offensive messages posted on social media.

“Enquiries are ongoing to establish whether any criminal offences have been committed.” 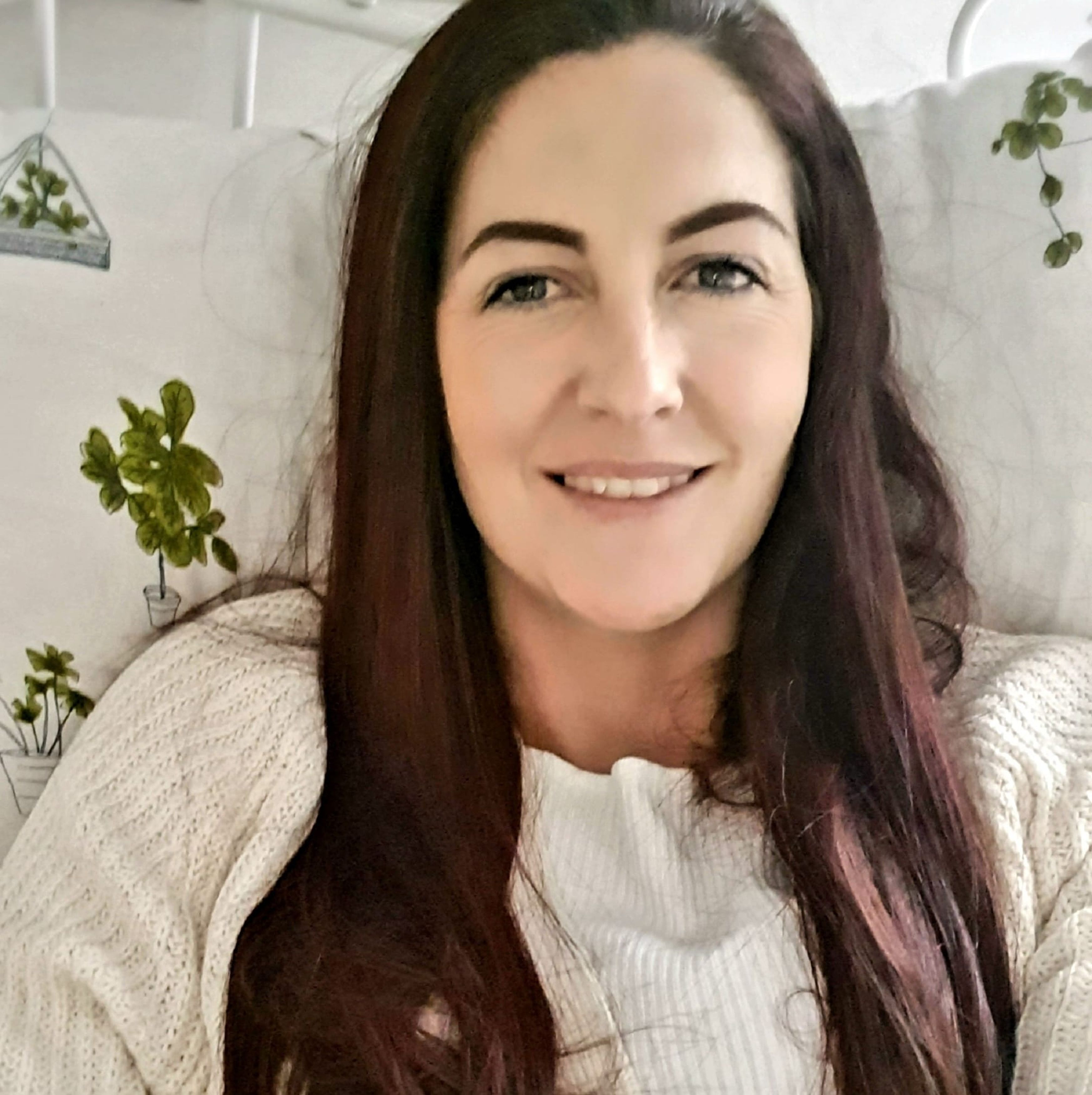 Kim said she had lost a close friend recently to coronavirus and was worried about the takeawayCredit: Kennedy News / Kim Robson / Facebook 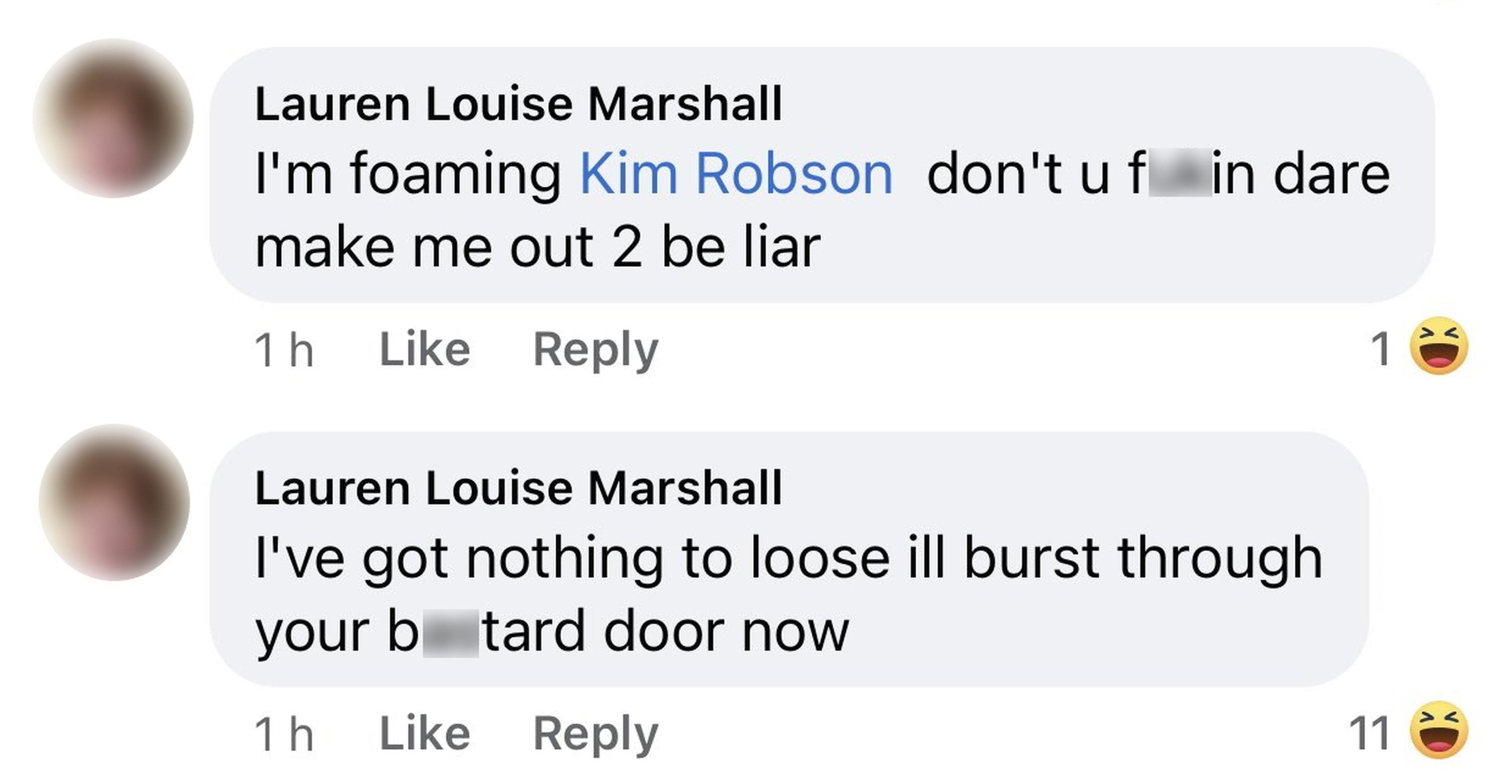 Lauren added that she would ‘burst through Kim’s door’Credit: Kennedy News and Media 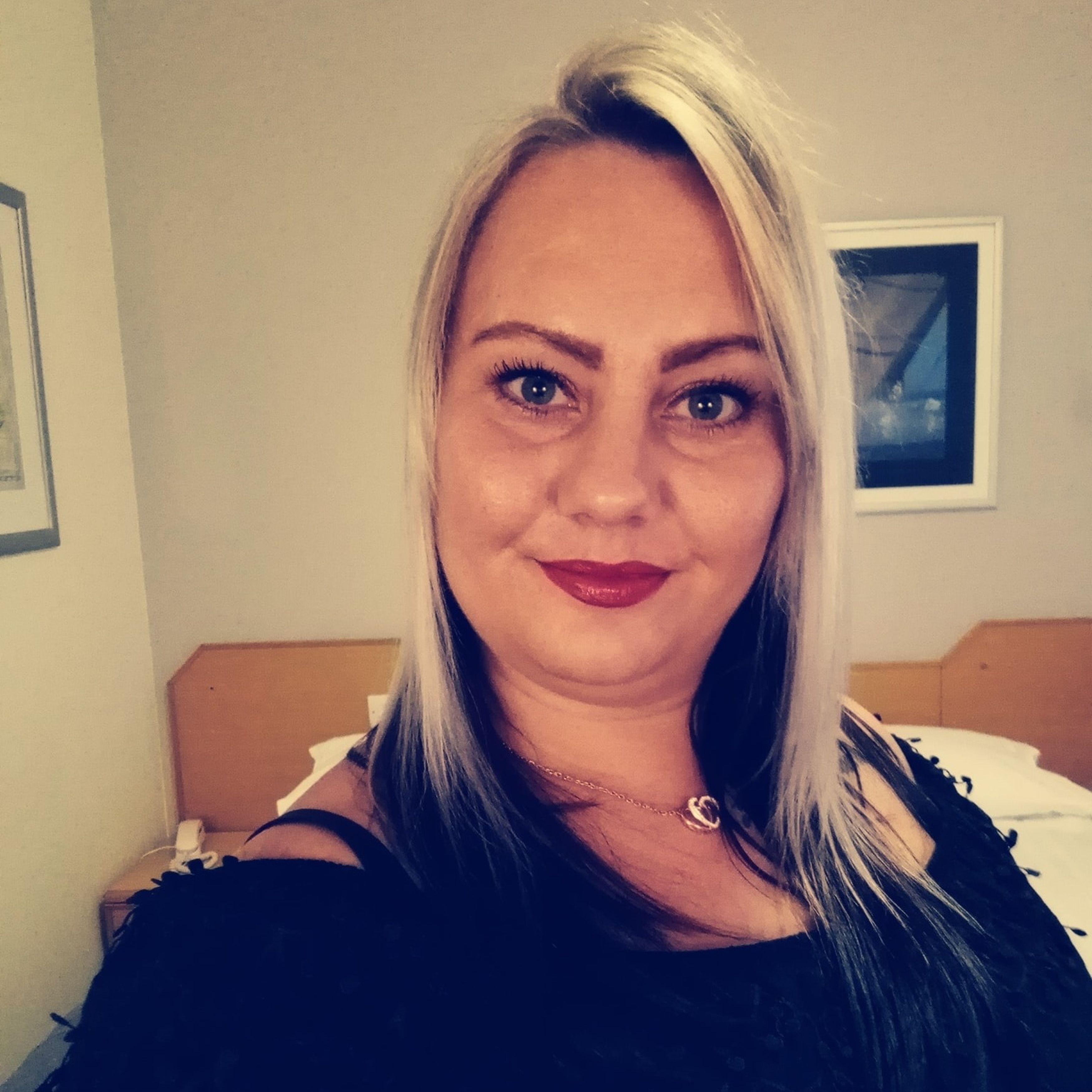 Cardi B has no driver’s licence, so Olivia Rodrigo has offered to drive her around