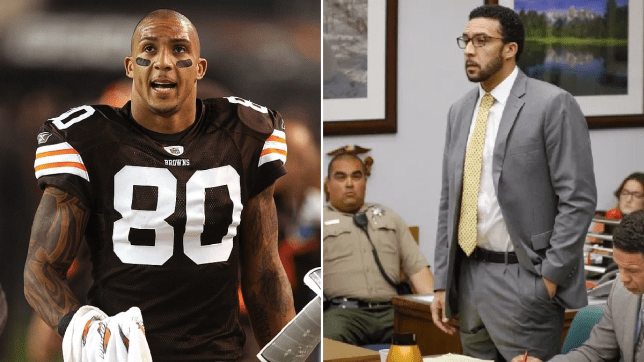 A former NFL star whose father was a football legend has been jailed for raping a 58 year-old homeless woman and flashing a 77 year-old woman. Kellen Winslow II, 37, was locked up for 14 years on Wednesday over the May 2018 rape of the woman in Encinitas, California, and other charges.

Winslow II, a former Cleveland Browns star who was once the highest-paid NFL tight end, was also ordered to sign the sex offenders’ register for the rest of his life on his release. His father Kellen Winslow Sr was known as one of the greatest tight ends in NFL history during his time with the Los Angeles Chargers.

Jurors convicted Winslow II of raping a homeless woman shortly after befriended her almost three years ago. He was also convicted of performing a lewd act in front of a 77 year-old woman at a gym, and exposing himself to his 57 year-old neighbor.

But jurors could not agree on other charges Winslow II faced. They were the alleged 2003 rape of an unconscious 17 year-old high school student when he was 19, as well as the sexual battery of a 54 year-old hitchhiker Winslow II is said to have picked up.

The rapist had originally been due to be retried on those counts, but struck a plea deal which saw him admit rape and misdemeanor sex offenses in return for a prison sentence of between 12 and 18 years behind bars.

Winslow II had originally been due to be sentenced in March 2020, but that hearing was delayed by the outbreak of Covid, The San Diego Union Tribune reported.

He has been in custody since 2019, with that time subtracted from the prison sentence Winslow II ultimately received.