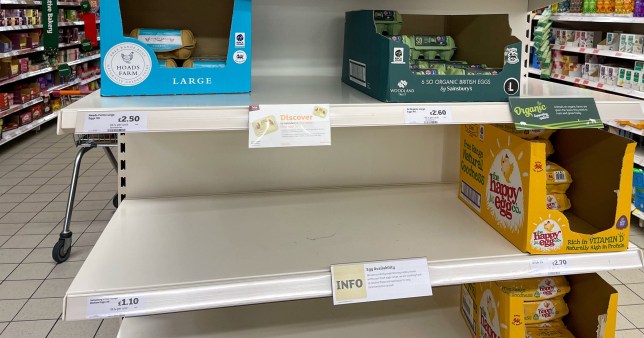 Signs have been put up in stores including Tesco, Sainsbury’s and Lidl warning of supply issues (Picture: Bav Media)

Concerns of nationwide egg shortages have been raised after rationing has been put in place and shelves are pictured empty in some supermarkets.

Signs have been put up in stores including Tesco and Sainsbury’s warning of supply issues, and at least one Lidl branch has started rationing boxes.

It isn’t yet clear how widespread the supply issues are.

A Tesco customer posted a photo on Twitter of a sign which read: ‘Due to the hot summer we are currently experiencing low availability across our egg range. Sorry for any inconvenience.’

Another photo taken at a Sainsbury’s showed a sign which read: ‘We are currently experiencing supply issues across our fresh egg range.

‘We are working hard to resolve these and apologise for any inconvenience caused.’

And a picture of a sign from a Lidl read: ‘Eggs are limited to three units per customer to ensure that everyone has the essentials they need.’

Pub chain J. D. Wetherspoon has also said there are supply issues at some branches, with alternative options available to replace the eggs in breakfast dishes. 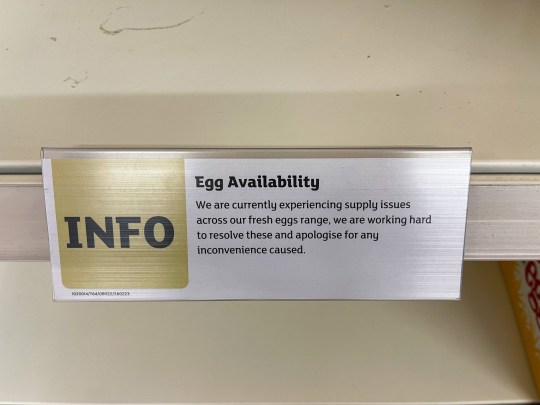 A sign about a shortage of eggs at a Sainsbury’s branch in Dorking, Surrey, last week (Picture: Bav Media) 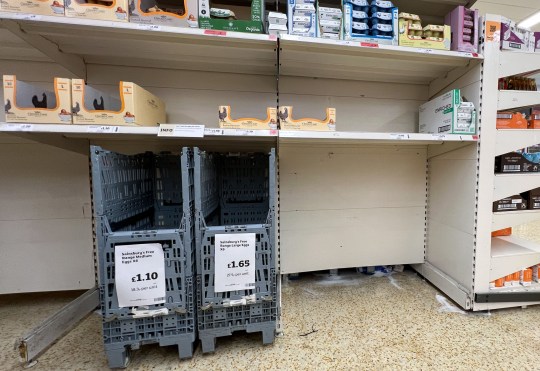 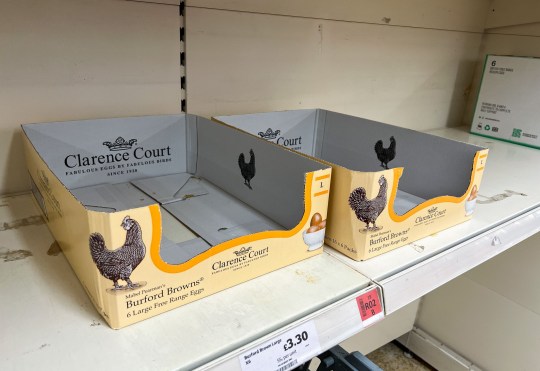 The shortages are believed to be a result of a combination of soaring prices for farmers and the bird flu outbreak (Picture: LNP / Rex / Shutterstock)

Spokesperson Eddie Gershon said: ‘We can confirm that there are temporary issues with egg supplies at some Wetherspoon pubs, due to the current impact of avian flu on egg production.

‘We are experiencing issues in receiving all the supplies we require to satisfy demand in every pub.’

The shortages are believed to be a result of a combination of soaring prices for farmers and the UK currently going through its ‘largest ever’ outbreak of bird flu.

Ben Pike, from the British Free Range Egg Producers Association, told the BBC bird flu was a ‘contributing factor’ in egg farmers struggling, but added pressure from prices was ‘probably a greater factor at the moment’.

The trade body carried out a recent survey of 163 farmers, and found a third of them have already reduced or stopped their egg production.

Farmers have asked for a 40p increase in the price of a dozen eggs to help them meet costs – but supermarkets say they are ‘constrained’ by the prices they can pass on to customers.

Andrew Opie, from the British Retail Consortium which represents supermarkets, said: ‘While avian flu has disrupted the supply of some egg ranges, retailers are experts at managing supply chains and are working hard to minimise impact on customers.’

A Defra spokesperson told Metro.co.uk: ‘We understand the difficulties that rising costs combined with the bird flu outbreak are causing for farmers and we are working with industry to monitor the egg market.

‘The laying hen population is approximately 38 million so any impact on overall supply would likely be minimal.’

Metro.co.uk has also contacted Lidl – which referred us to Mr Opie’s comment above – and Sainsbury’s and Tesco for further comment.

Glam World Cup fans BANNED from baring shoulders, midriffs and other body parts as they face fines & jail in Qatar