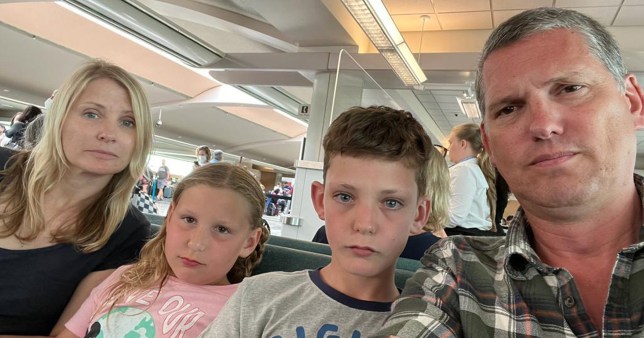 The Millers had to pay more than £2,000 extra for an overnight hotel and new flights (Picture: BPM)

A little girl was left in tears when her family was not allowed to board their plane to Disney World because of a mix-up at the airport.

Sheldon Miller and his family were supposed to fly from Birmingham to Orlando, Florida, on April 3 but they had to postpone their trip after his dad was diagnosed with cancer.

They rescheduled their KLM flight for May 30 and assumed everything was fine after they received a confirmation email and a link to check-in online from KLM’s partner Delta.

But their excitment quickly turned to misery when they got to the airport and a staff member told them they were not booked onto the flight leaving that day.

Sheldon said: ‘At that point, our seven-year-old daughter burst into tears and our 13-year-old son wasn’t best pleased either, neither were we.

‘We then spent three hours trying to speak to someone at KLM only to be told finally by a call centre rep we had to sort it out through social media as they couldn’t do it.

‘I’ve never heard anything so ridiculous in all my life when it comes to business.’ 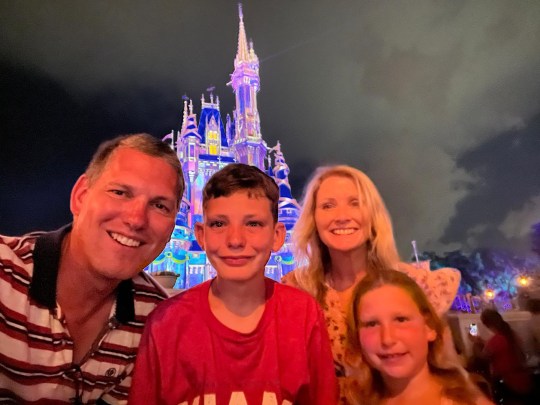 The family did end up enjoying their trip to Disney World but they had issues when they tried to return home again (Picture: BPM)

Eventually the dad decided to pay £100 for overnight hotel rooms at Birmingham Airport and £2,500 for alternative flights with Aer Lingus.

The family finally got to enjoy their trip to Disney World but ran into issues when it was time to return home on June 9 and they were again told they had not booked any seats on their flight.

The Millers ended up taking a bizarre route home with Virgin Atlantic– from Orlando to Heathrow, then on to Amsterdam, and then on to Birmingham.

Sheldon said: ‘No one has stepped up in any way. The whole experience felt like one massive pass the parcel, with no one at KLM remotely interested in our customer issue, let alone willing to take responsibility for it.’

This is one of several family holidays ruined amid the airport chaos in the UK right now.

In a similar story, Kelly Matthews had saved thousands of pounds take her mum and her nine-year-old son Noah to Disneyland in Paris.

The trio arrived at Bristol Airport decked out in full Disney-inspired Mickey Mouse ears, ready for their holiday in Paris. But it soon emerged their flights had been cancelled ‘for no reason.’

Kelly, from Saundersfoot in Pembrokeshire, insists they checked their flight status before leaving.

She said: ‘When we got to the airport I then checked the app again. This time it said it had been cancelled, with no reason given.’

Kelly, 35, has since heard that easyJet cancelled the flight at such short notice due to ‘crew issues’.

easyJet said it would provide customers with the opportunity to rebook different flights of get a full refund.

Thomas Jacobs Is My 1st Fiance I Actually Want to Marry