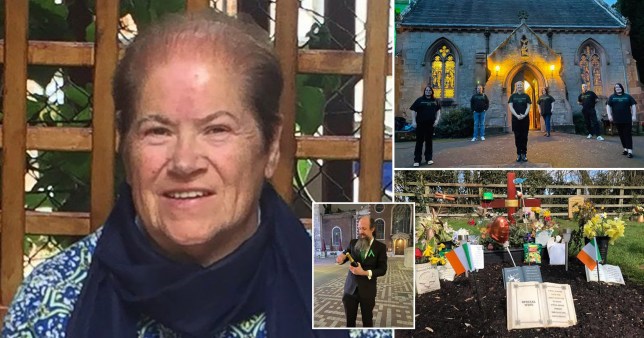 The family of community stalwart Margaret Keane say she was with them in spirit as a church court in London heard their appeal (Picture: Message to Margaret)

A family who have won the right for an Irish-only transcription on a gravestone to a community figurehead have said she was ‘watching down’ during their court appeal.

The daughters of Margaret Keane had led a 10-month legal battle after a judge said they could only have the loving phrase on the memorial with an English translation.

The Chancellor of the Diocese of Coventry ruled that the epitaph ‘in ár gcroíthe go deo’, which translates as ‘in our hearts forever’, would not be understandable to many people and could be misinterpreted as a political slogan.

The family’s subsequent legal appeal culminated at the Court of Arches yesterday with a ‘significant’ ruling allowing the standalone message on the headstone they will now be able to erect at St Giles’ Church Exhall in Coventry.

Mr Keane’s husband, Bernie, who was watching remotely from his home in the city, wept as the ecclesiastical court gave a brief outline of its decision ahead of releasing a full judgment at a later date.

‘Fundamentally, we feel relief and delight.

‘As a family it means we can do what every other grieving family has done before us and erect a suitable, appropriate and meaningful headstone.

‘For the wider community, especially the Irish community, it means the Irish language is treated with the same respect and parity in churchyards.

‘We await the final outcome of the ruling, so we’re not sure what the judges will say, but the outcome means the Irish language will be treated equally and carries as much meaning as any other language.

‘We certainly hope that no other grieving family has to go through what we have been through and policy will change as a result of this.’ 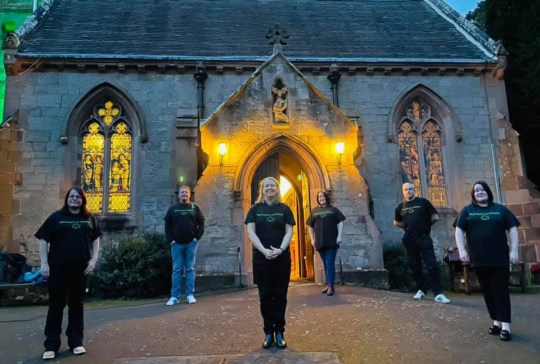 Mrs Martin and sister Caroline Newey were at the Arches Court of Canterbury, which sat at St Mary-Le-Bow Church in London, while Bernie watched at home.

Mrs Martin said: ‘He cried twice and he just said “this is for mum”.

‘It’s a lot to process for dad because it’s on such a big scale but he’s totally overwhelmed and delighted. For him, the headstone was a matter of pride to the husband of a late wife and now he knows we can go ahead and add the message.’

Born in Ireland, Mrs Keane settled in Coventry with Bernie and became known for her work with the Gaelic Athletic Association (GAA).

In 2018, she received the GAA’s International Award, which said she had given ‘a lifetime of unselfish service and dedication’ to the association.

Mrs Keane, who also left behind 14 grandchildren and one great-grandchild, had another role as a dinner lady in Bedworth, Warwickshire, for 26 years.

Mrs Martin said: ‘She would have been the first to stand up against something that was wrong so we know that mum has been watching down on us throughout all of this. We know she was stood with me and my sister in the Court of Arches. She would have been giddy with excitement at some of it and proud of what we’ve managed to achieve.’ 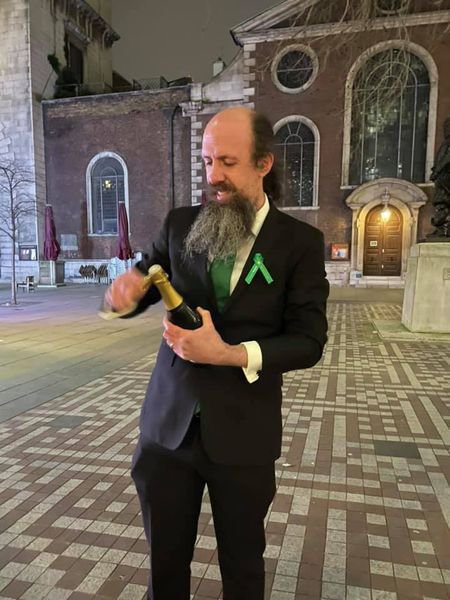 Oisín Mac Conamhna of Conradh Ni Gaelige London, an Irish language rights group which spoke in support of the family at the Court of Arches hearing (Picture: Message to Margaret)

The family ordered the memorial from a stonemason today, with the aim of installing it for Mother’s Day or St Patrick’s Day.

Their fight began in May 2020 after a ruling by the Chancellor of the Diocese of Coventry – which represents the Church of England in the area – who referred to regulations stating that messages on gravestones will be read by many people who did not know the deceased.

Judge Stephen Eyre QC concluded: ‘Not only would the message of the inscription not be understood but there is a risk of it being misunderstood.

‘Given the passions and feelings connected with the use of Irish Gaelic there is a sad risk that the phrase would be regarded as some form of slogan or that its inclusion without translation would of itself be seen as a political statement.

‘That is not appropriate and it follows that the phrase “In ár gcroíthe go deo” must be accompanied by a translation which can be in a smaller font size.’ 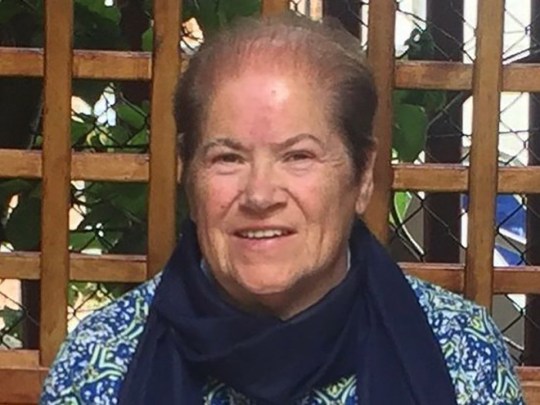 Margaret Keane was a leading light in the Irish community through her work with the Gaelic Athletic Association (Picture: Message to Margaret/@messagetomargaret)

Lawyers with legal firms Irwin Mitchell and Doughty St Chambers then took on the family’s case free of charge.

A three-judge panel heard the appeal and allowed the design, with the provision that the translation be added to the church’s register.

Caroline Brogan of Irwin Mitchell, the family’s solicitor, said: ‘This has been a difficult time for the family but naturally the court’s decision is a vindication of their efforts and allows them to pay their respects to a much-loved mum in a way that recognises their love for her and honours the family’s heritage.

‘This case is of significant importance to the Keane family and also to the Irish in Britain.

‘It goes to the heart of mutual respect for identity, equality and Irish language rights.’

The family intends to continue the Margaret Keane Memorial Fund, which is raising money for a children’s Irish exchange project, an independent study into the impact of public decisions on Black and Minority Ethnic Groups and future challenges to ‘discriminatory’ Diocesan rules or practices.