FAMILIES were evacuated from their homes in the middle of the night after a landslide caused a 70ft wall to collapse into their properties.

Residents in Nottingham were forced to flee their terraced houses after tonnes of rubble came tumbling down in the pouring rain at 1am on Wednesday morning. 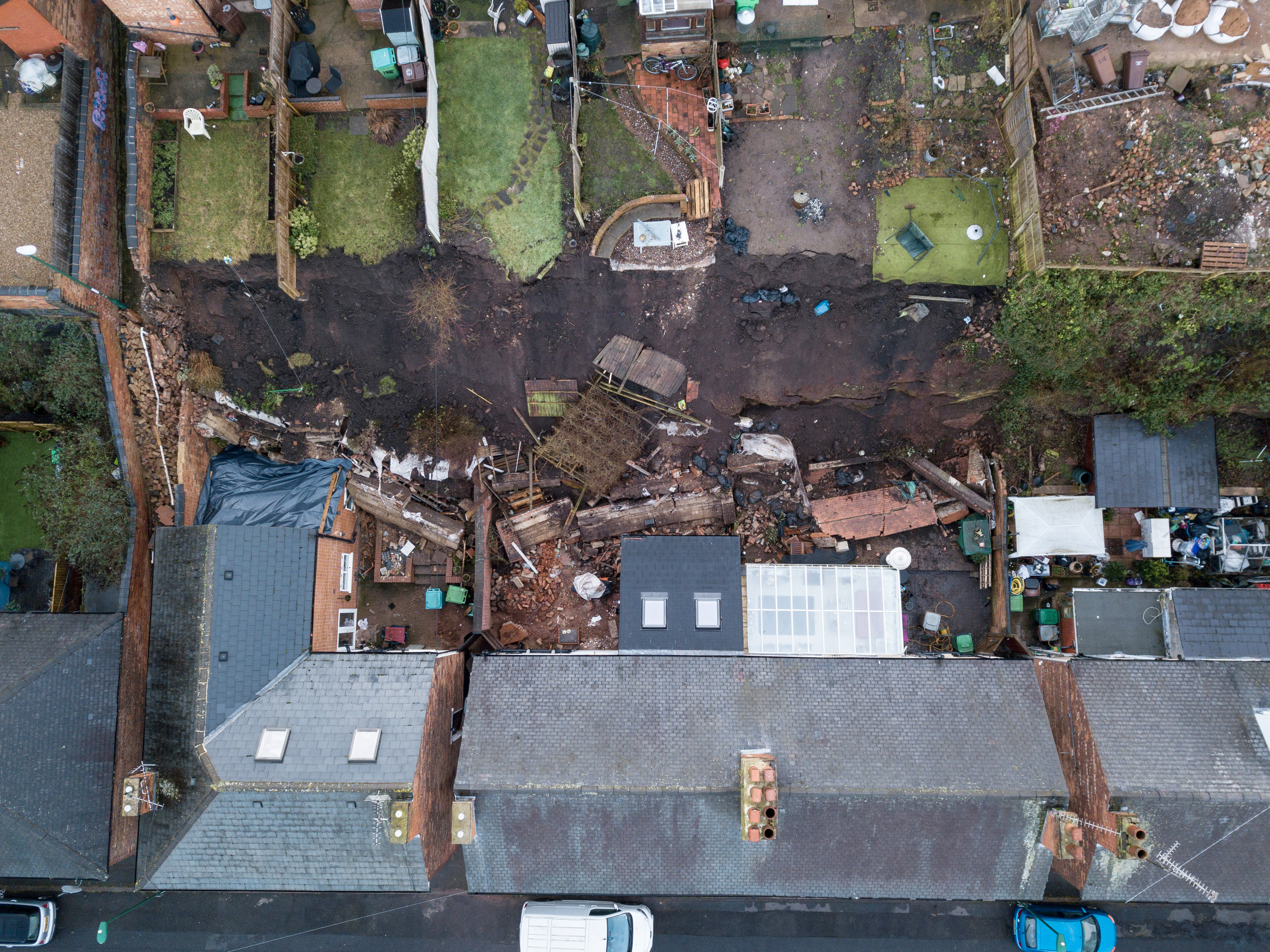 Families were forced to flee their homes after the landslideCredit: SWNS:South West News Service 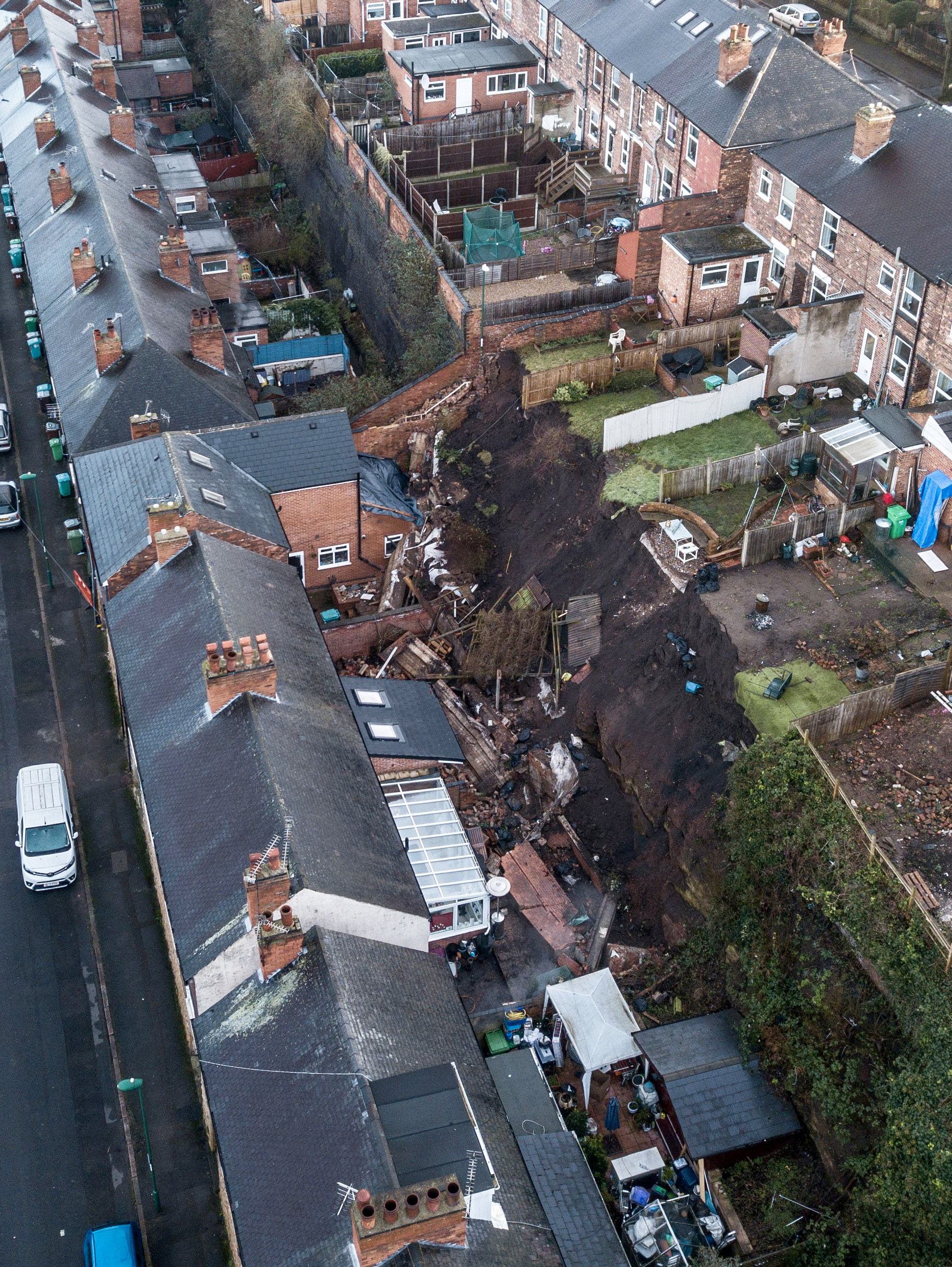 A 70ft wall collapsed on to their properties in the middle of the nightCredit: SWNS:South West News Service 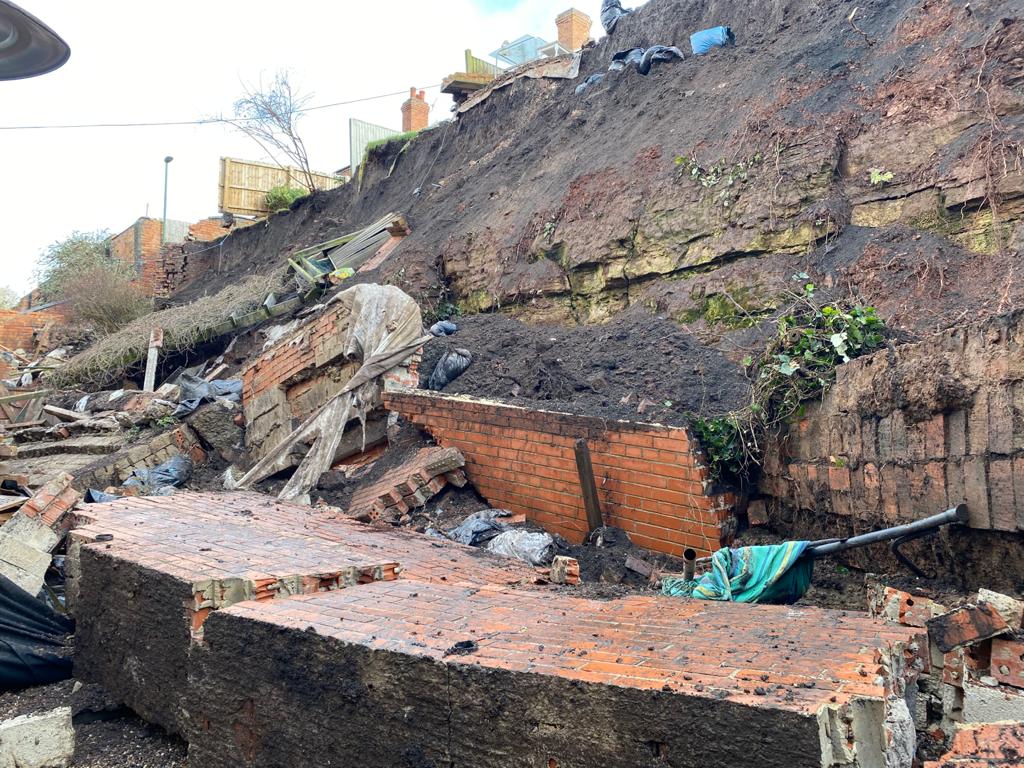 Tonnes of rubble came tumbling down in the pouring rainCredit: BPM Media

Terrified locals were woken by the sound of bricks and earth collapsing into their gardens on Spalding Road and Windmill Lane, in Sneinton, Nottingham.

Emergency services rescued the families from four separate properties as their bathrooms and kitchens flooded during the torrential downpour.

Shocking images show the crumbled wall lying inches from the houses and piles of rubble blocking a stairway between the two roads.

Nottinghamshire Police said no one was injured – and evacuees returned to their homes at 6am the same day.

Inspector Charlotte Allardice said: “Emergency services were called from distressed residents following a report of a landslide in Spalding Road and Windmill Lane, St Ann’s at around 1am this morning.

“They needed assistance with somewhere to stay overnight.

“They returned to their homes at around 6am having spent time with their neighbours.

“Roads close to the incident had to be closed until the area was deemed to be safe.

“The force is working closely with the local council and we are using our established contingency and emergency plans to respond to the situation.

“There have been no reported injuries.”

Nottingham has had an inch of rain over the past few days – making already saturated ground even wetter.

The River Trent has also burst its banks in sections over the past week.

Possible causes of the collapse which are being examined include errors in the construction of the wall, shifting foundations or the heavy rain.

Nottingham City Council said it will send structural engineers to evaluate the damage caused by the collapsed wall.

A local authority spokesperson said: “We are aware of this incident and are supporting the police in their efforts to help affected residents.

“All residents in affected properties were safely evacuated nearby and we have arranged for temporary accommodation to be made available this morning for residents who need it.

“We have arranged for structural engineers to attend to assess damage to the properties from the wall collapse.”

Norman Wheatley, who has lived on Spalding Road for 52 years, has spoken about the moment huge pieces of brick fell into his garden and hit his conservatory.

The 57-year-old told Nottinghamshire Live: “I was asleep and my daughter ran into my room to wake me up.

“The whole middle section of the wall had fallen away and the two sides folded in.

“The people above us (on Windmill Lane) informed the council who have been out to assess it. It’s damaged the walls of the conservatory a bit but not the actual house.

“We’re really lucky it did not happen during the middle of the day. Sometimes children play out in the gardens. It could have been even more serious and I’m just glad no one was hurt.”

Another resident who has lived on the road for 30 years, Mr Oakley, said he heard a “huge bang” and that his house moved during the ordeal.

He added: “We took a couple of families in to help while they were evacuated. The wall that fell was built 15 years ago after it was replaced. It’s the most shocking thing to have happened here.”

Clifford and Sandra Lowe, 74 and 76, also said they fear their home could be next to be hit – as they live below a part of the wall which did not fall away.

The couple were woken during the middle of the night, but their home was not evacuated.

They said: “It is so shocking. It made such a loud noise and we felt the ground move.

“The whole wall has completely come away. There’s so much damage.

“We are worried the bit of wall above us could be next. We have been told to not go outside into the garden. We were asked to evacuate but we said no. We have had nothing but bad luck.”

In a tweet, Nadia Whittome, Labour MP for Nottingham East, said: “Very concerned that families had to be evacuated from their homes in Spalding Road and Windmill Lane following a landslide and the collapse of a large brick wall.

“I will be following this up with the council as matter of urgency.” 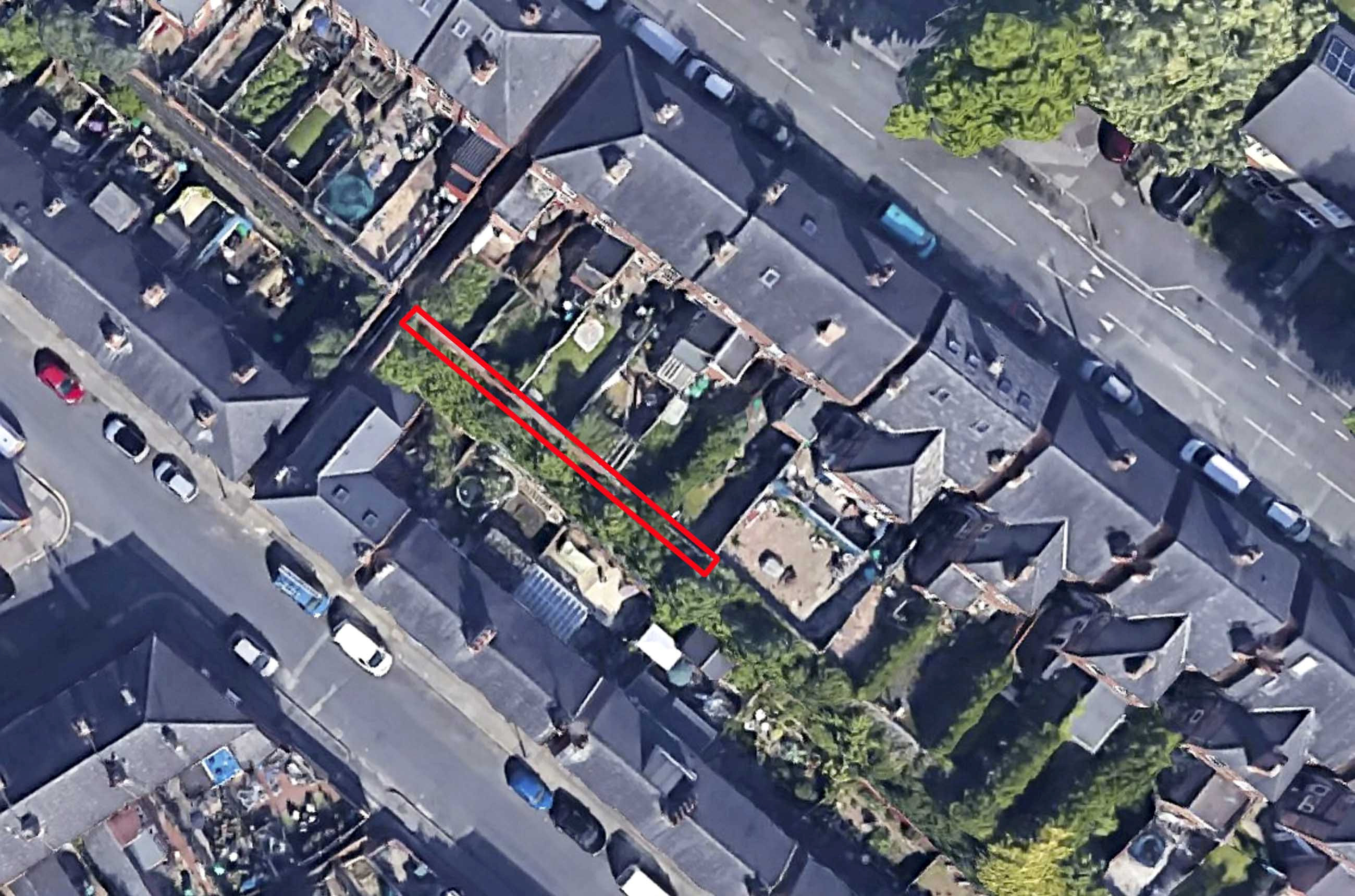 An aerial view of the properties on Spalding Road in Nottingham, showing the wall (in red) prior to its collapseCredit: SWNS:South West News Service 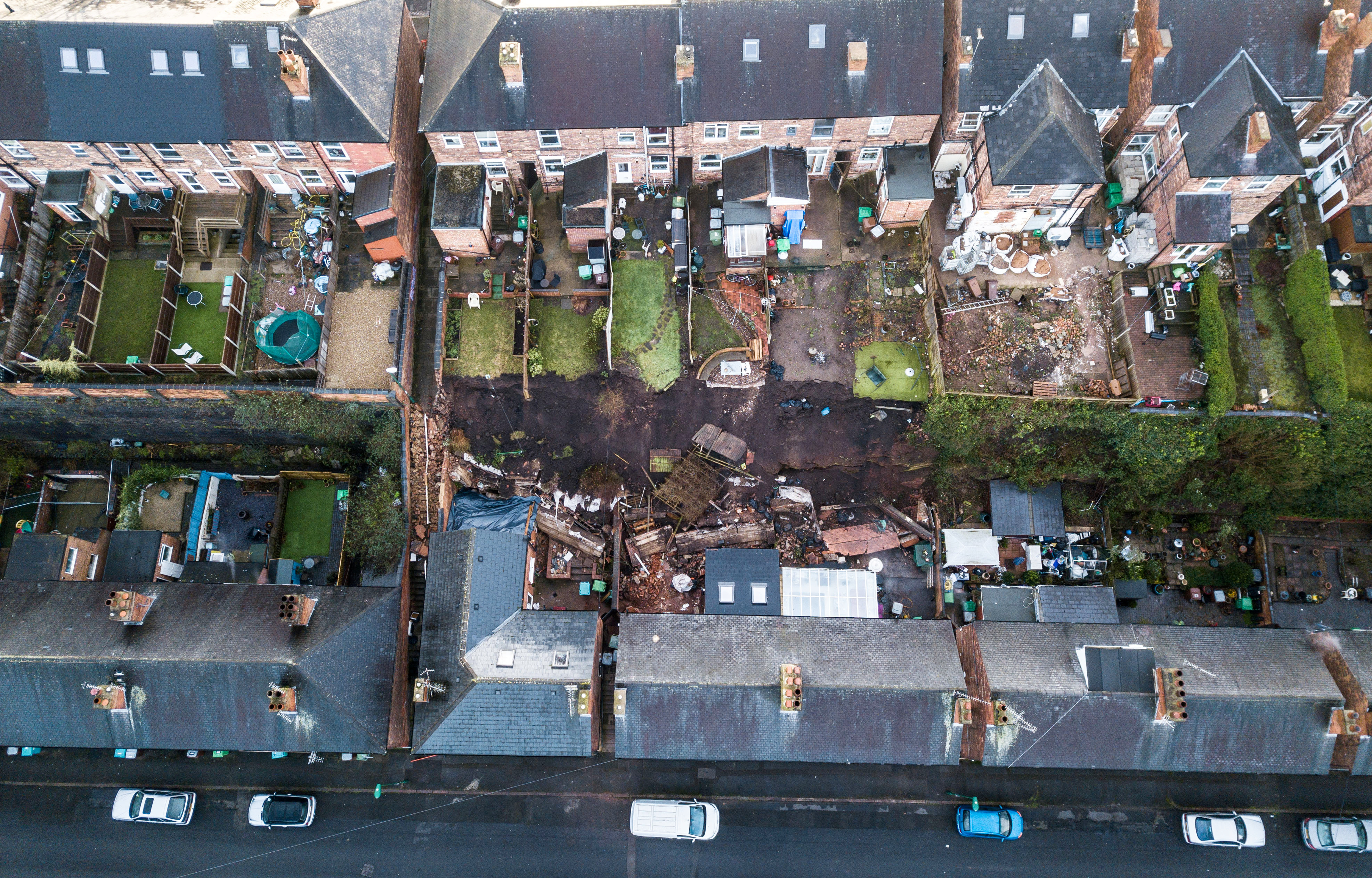 Residents were evacuated out of their homes in the early hours of the morningCredit: SWNS:South West News Service 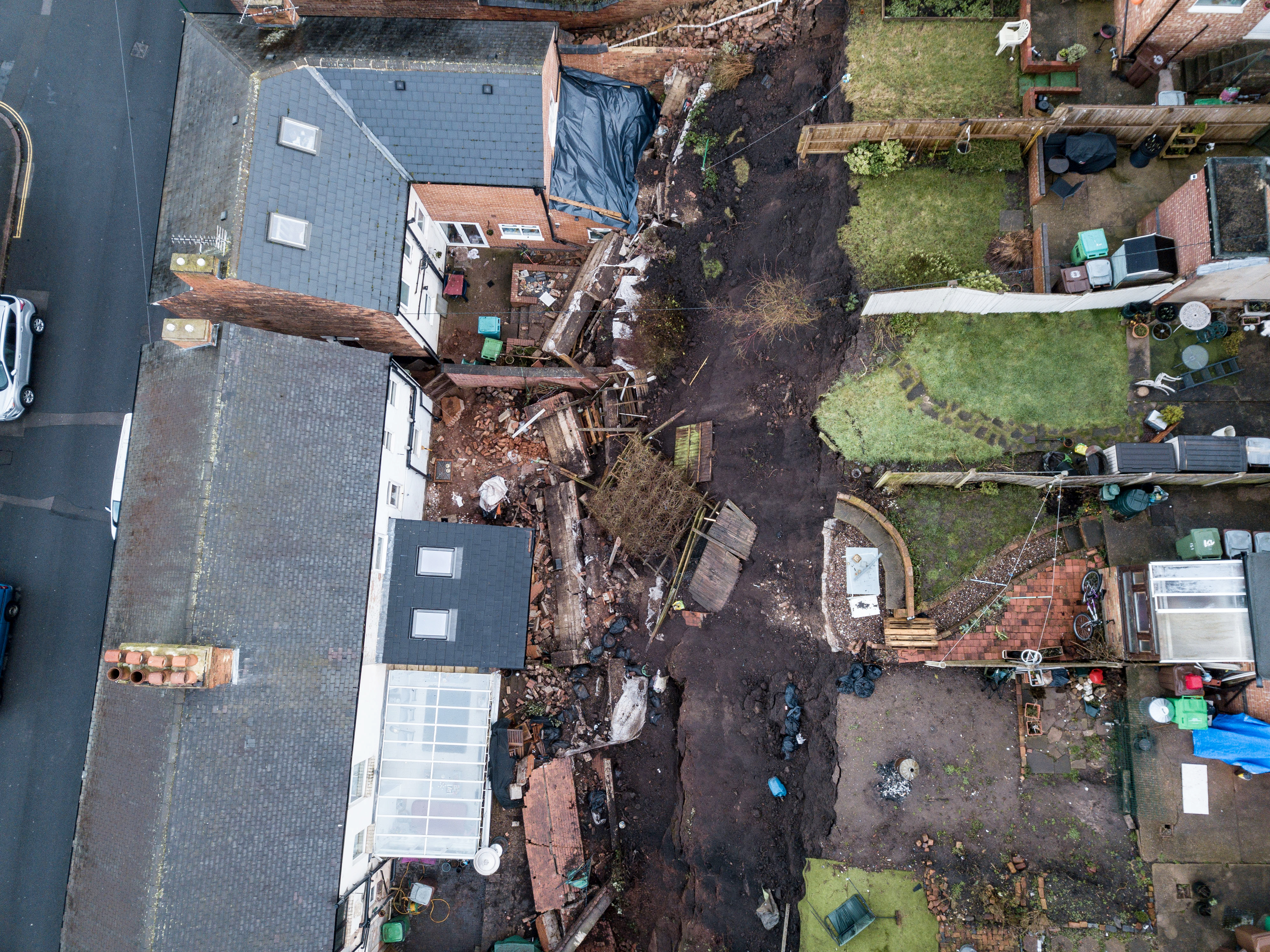 Police have said that no one was injured during the ordealCredit: SWNS:South West News Service 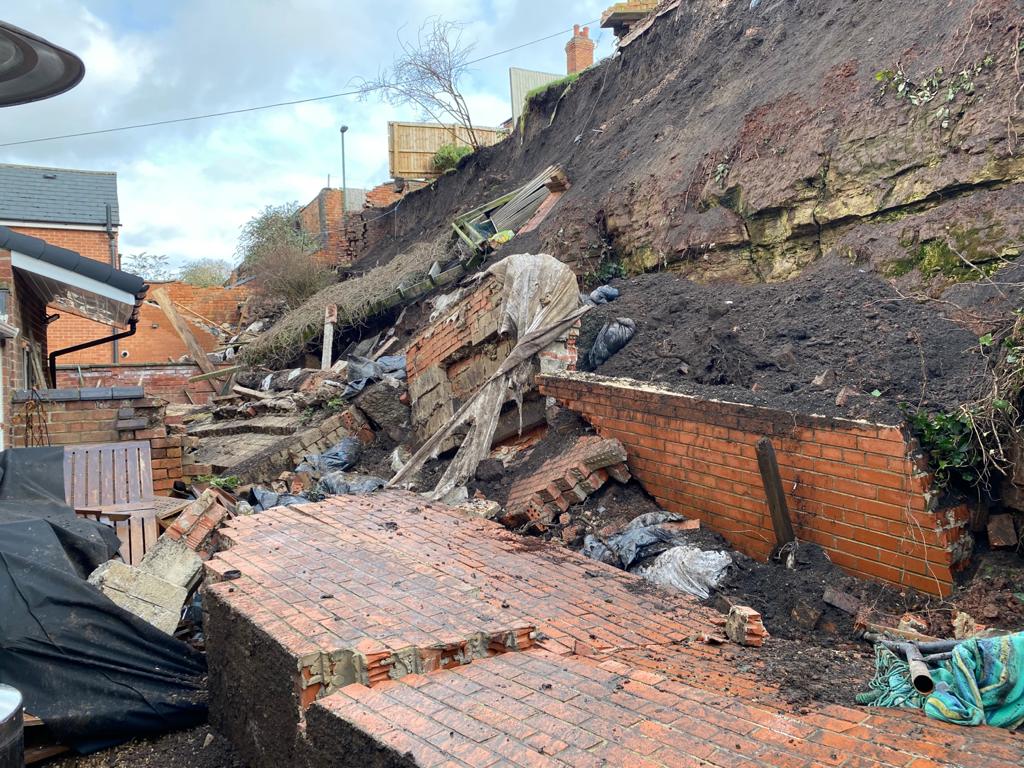