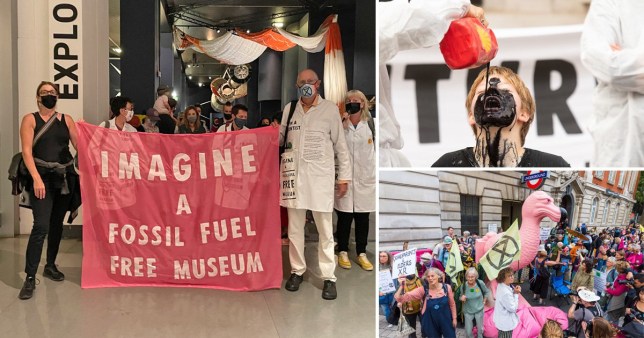 Dozens of protesters from Extinction Rebellion staged a ‘die in’ at the Science Museum today in protest at what they see as ‘greenwashing’.

Police asked activists to leave but many refused, singing ‘Power to the people’ and ‘Shell out’.

Dozens lay on half of the ramp which leads to the entrance of the museum.

Meanwhile, a blockade has been set up outside the Natural History museum next door where hundreds of protesters have stopped traffic in the road.

The junction of Cromwell Road and Exhibition Road was full of Extinction Rebellion protesters and supporters.

Police also blocked off the road with a police van and a number of officers.

The Science Museum has put on an exhibition called ‘Our Future Planet’ which is sponsored by oil giant Shell.

Part of the agreement was that the museum signed what was seen by many as a ‘gagging clause’ agreeing not to criticise Shell, despite the exhibition talking about greenhouse gases.

It looks at different ways carbon dioxide could be drawn out of the atmosphere, including technologies Shell has a commercial interest in.

The Science Museum has defended the partnership but campaign groups including Culture Unstained has said that it allows Shell, one of the world’s biggest polluters, to ‘greenwash’ its reputation.

A spokesperson for the museum told Channel 4 News, which first reported the contract, that ‘energy companies need to play a big part’ in the ‘transition to a low carbon economy’. 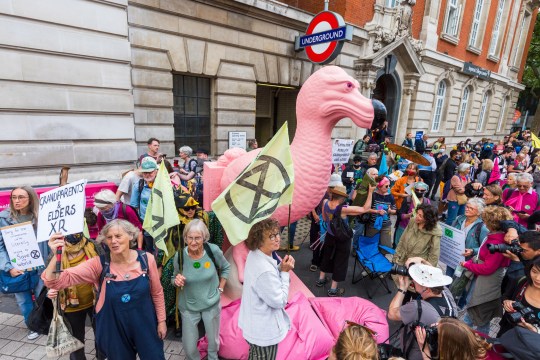 Activists with a giant dodo outside the Science Museum today (Picture: EPA) 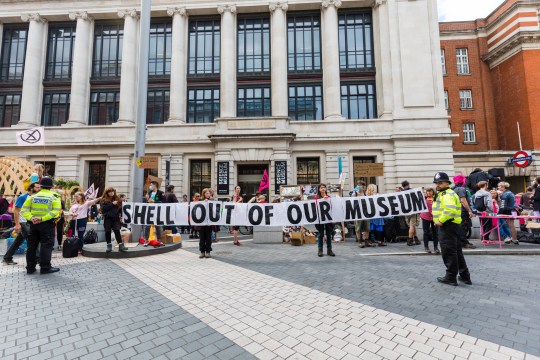 The protest is part of a two week action planned by XR (Picture: EPA) 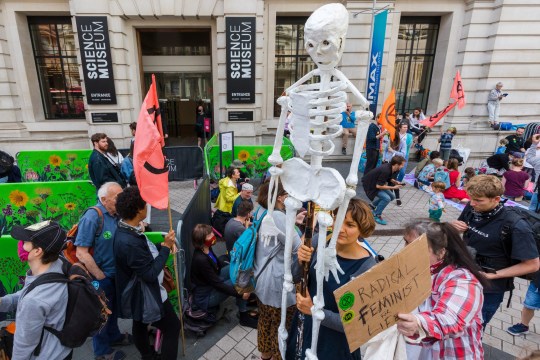 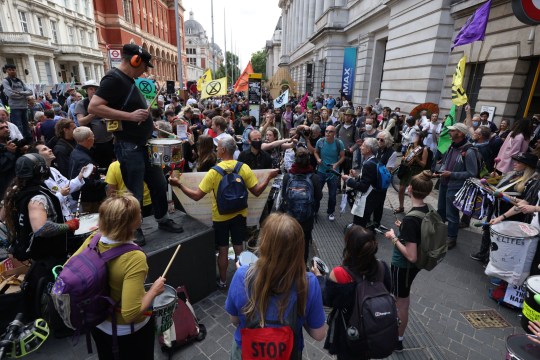 They said they ‘regard the blanket approach demanded by some campaigners of severing all relationships with energy companies as unproductive’.

She gave a speech to the protesters outlining her reasons for joining the movement in 2019, saying: ‘Learning about the dire situation, the dire state of our beautiful planet, broke my heart.

‘It filled my heart with dread and fear for my child’s future. As a desperately protective mother, I refuse to accept my son’s life as collateral damage for the few to continue economic growth, business as usual, as long as mother nature will allow it.

‘As well as continuing to apply pressure to the Government, which we must do through non-violent direct action, we need to also dream about how our future world could look.’

The entrance to the museum was closed to people who wanted to come inside during the action.

Protesters chanted ‘hey hey, ho ho, sponsor Shell has got to go’ repeatedly as they paraded through the museum while escorted by police and members of the museum security team.

A spokesperson for XR posted on Twitter: ‘The @sciencemuseum was once one of the gems in London’s cultural crown.

‘Today is is simply shut down.’

Shell previously said after the controversy: ‘We fully respect the museum’s independence.

‘That’s why its exhibition on carbon capture matters and why we supported it. Debate and discussion — among anyone who sees it — are essential.’

Is Vigil on BBC One based on a true story?