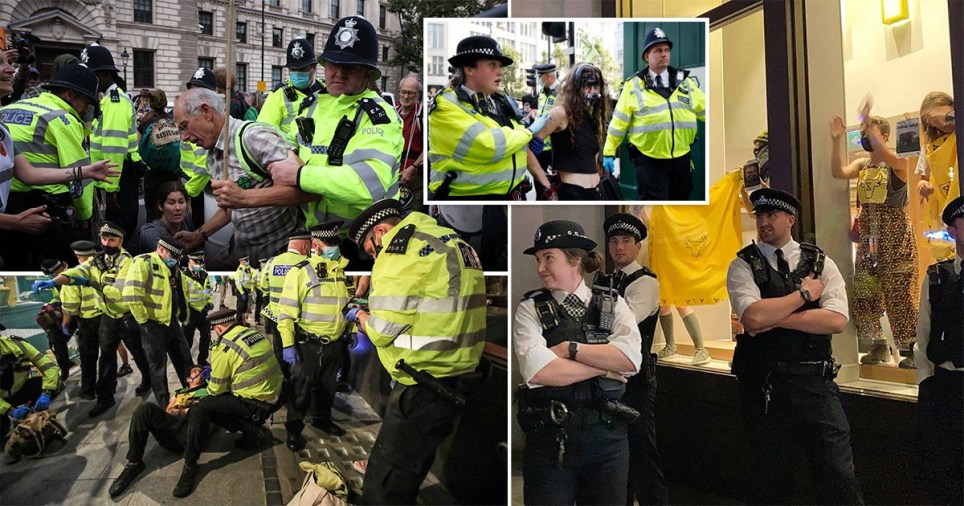 Protesters glued themselves to a branch of McDonald’s in London tonight (Picture: @RebelsAnimal)

At least three ‘rebels’ with Extinction Rebellion glued themselves to McDonald’s in Leicester Square this evening hoping for a ‘sleepover’ lasting until the morning.

The protest, part of two weeks of planned action in London, is aimed at making people take notice of the unfolding climate crisis.

Images showed people standing in the window of the fast food branch carrying yellow flags as police officers lined up outside.

A spokesperson for XR tweeted: ‘Feeling sleepy? Leave your wallet at home and come with a snack, some superglue and a sleeping bag.

It comes as police made dozens of arrests to try and get control of the protests, which saw major roads and junctions blocked in the capital.

There are now 3 rebels glued on at our McSleep-in as we occupy McDonaldâs Leicester Square for the slumber party of the year! Weâll be here all night to send a message to McDonaldâs that itâs time to stop sleeping on the job and transition to a plant-based food system. pic.twitter.com/EFHxjhSI4f 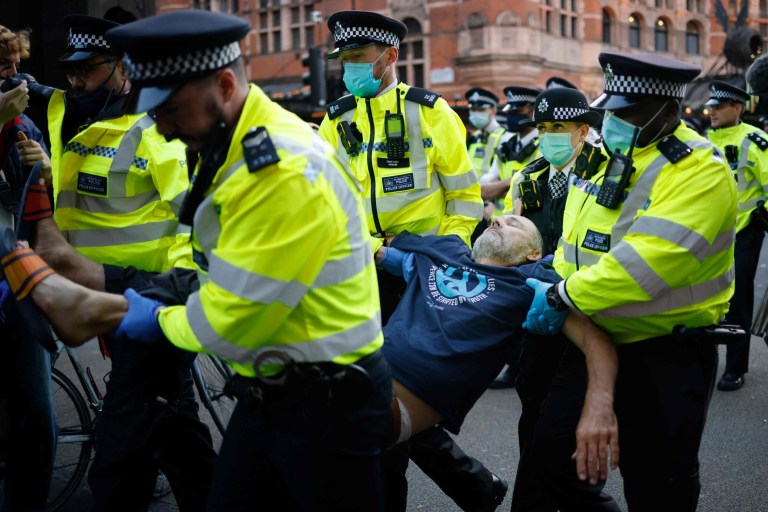 Police officers detain a climate activist from the Extinction Rebellion group who was glued onto the road in central London today (Picture: Getty) 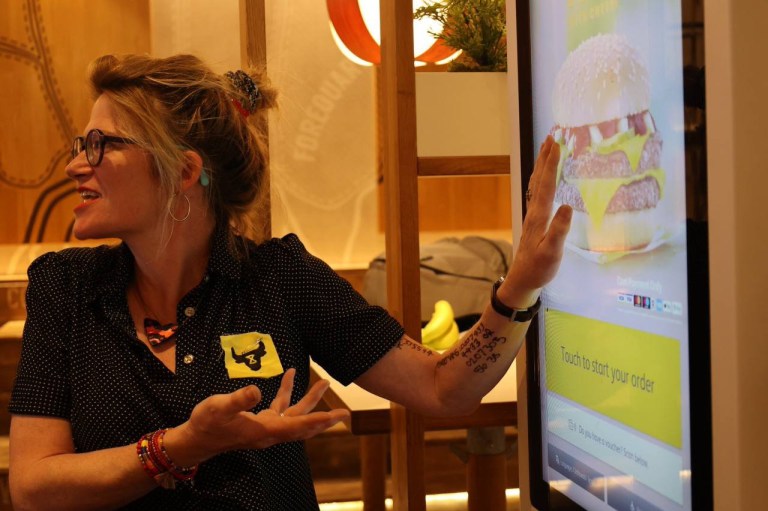 Protesters want McDonald’s to commit to transitioning to plant based food (Picture: @RebelsAnimal) 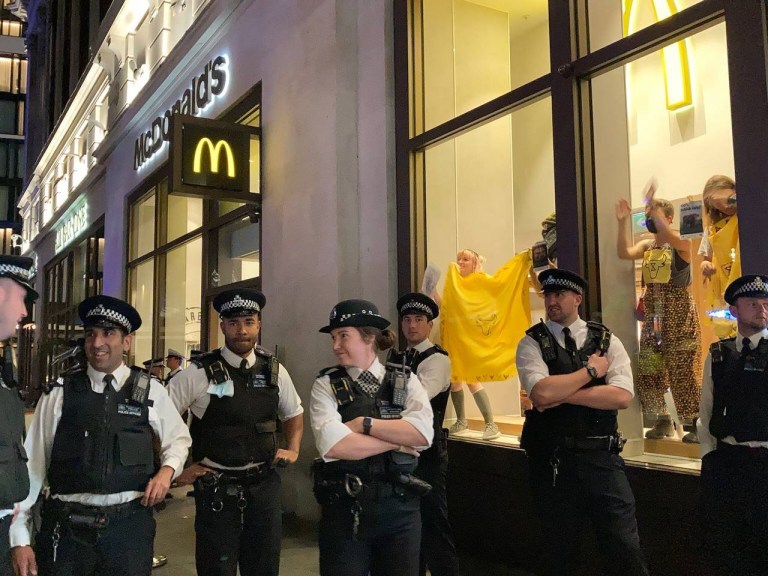 Police outside Leicester Square McDonald’s as protesters stand in the window (Picture: @RebelsAnimal)

The Metropolitan Police said the arrests, including 10 on Sunday and 52 on Monday, were for a variety of offences.

The subgroup Animal Rebellion tweeted photos of the ‘occupation’ of McDonald’s, saying: ‘There are now three rebels glued on at our McSleep-in as we occupy McDonald’s Leicester Square for the slumber party of the year!

‘We’ll be here all night to send a message to McDonald’s that it’s time to stop sleeping on the job and transition to a plant-based food system.’

They said they targeted the chain as they are ‘by far the biggest fast food giant globally, and therefore have a huge impact on our food system’, adding: ‘Love and solidarity to those who will be spending the rest of the night in the cells for standing up and calling out McDonald’s and demanding change!’

Police arrested 36 people during the McDonald’s action, they said, which is in addition to the numbers provided by Scotland Yard earlier.

The climate protest group said two women had earlier been arrested for spray painting the floor outside the HM Revenue & Customs (HMRC).

An elderly woman who lay in the road was carried off by four policemen and appeared to be arrested, with XR protesters suggesting this was for obstruction.

Other demonstrators lay in front of a banner saying ‘Government in bed with climate criminals’. 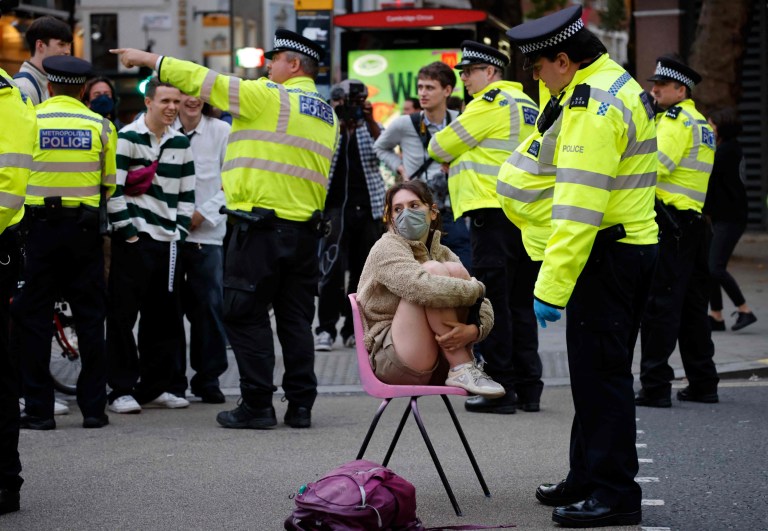 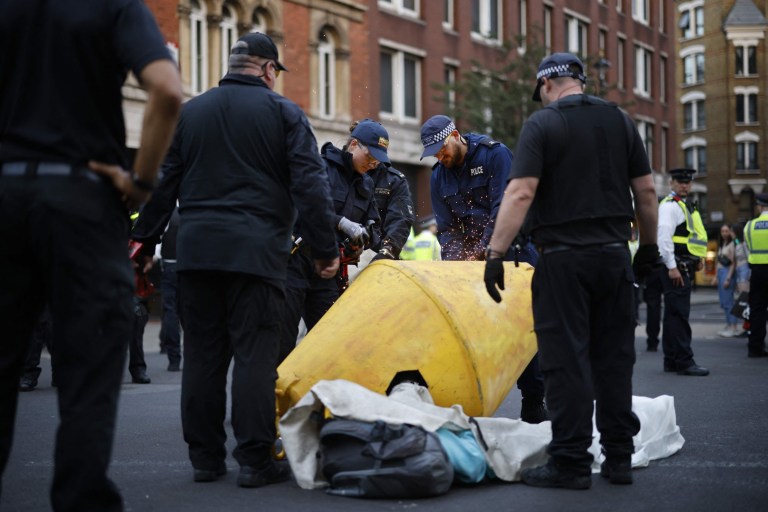 Officers attempt to cut through a metal weight with climate activists locked on in central London (Picture: Getty) 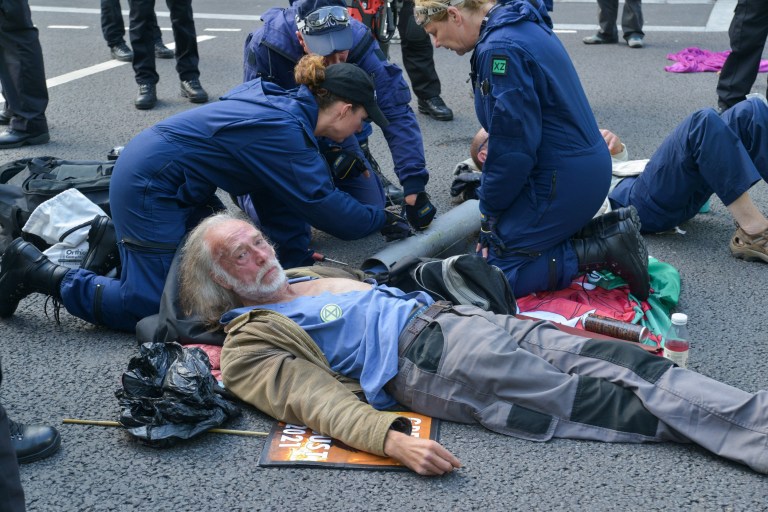 An activist chained with colleagues during the demonstration on Parliament Street (Picture: SIPA USA) 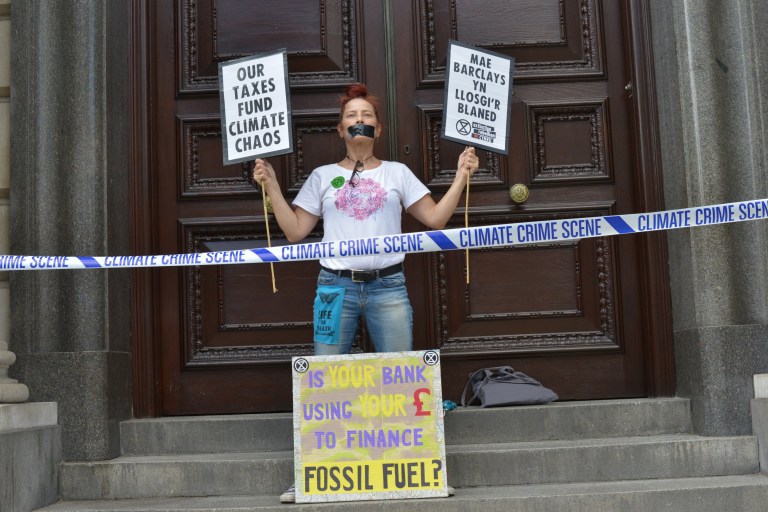 A protestor holding placards outside the HM Revenue and Customs on Whitehall (Picture: SIPA USA) 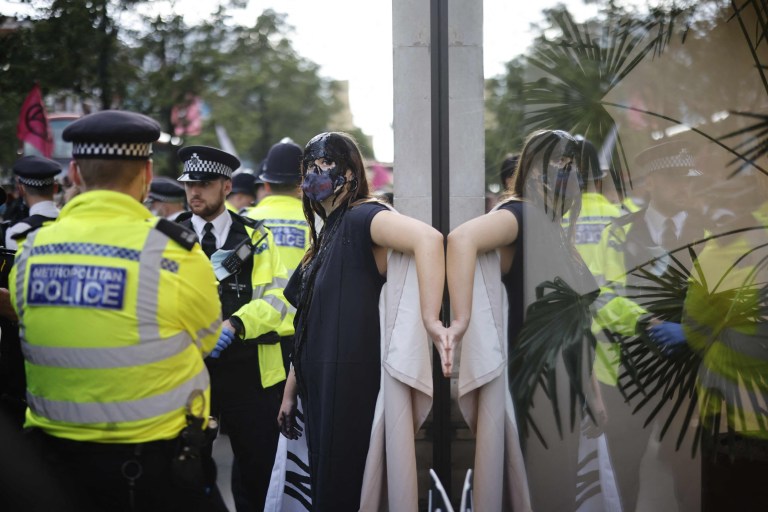 A woman demonstrates with a hand glued to the window of the Selfridges store in central London (Picture: Getty) 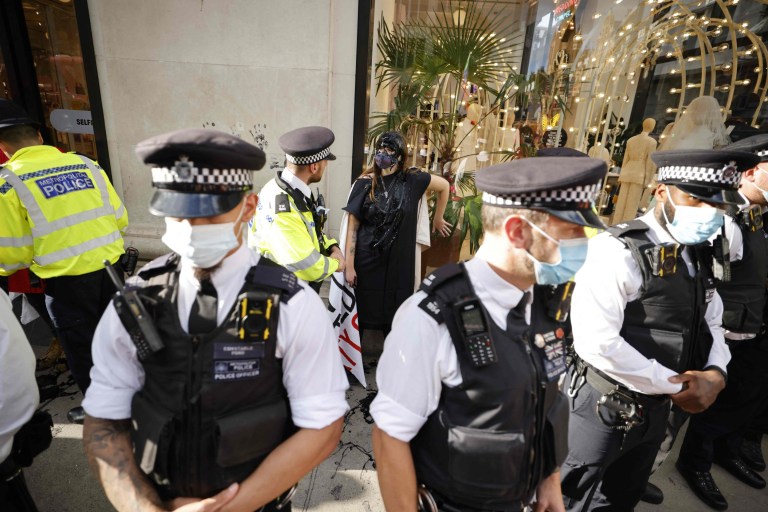 After gathering at Parliament Square, demonstrators ran towards slow-moving traffic on Whitehall for the second day of its planned 12-day mass protest.

A Transport for London spokesperson said that Parliament Street in Whitehall was blocked in both directions and that there was slow-moving traffic in pockets of central London near Embankment and in Westminster, with local delays expected.

Mike E, 72 – who declined to give his full name, joined XR in 2019 but protested in London for the first time on Tuesday.

He said that people labelling the climate activist group ‘extremist’ was ‘nonsense’.

‘We’re just ordinary human beings who’ve come from all over the country. We’ve different backgrounds and pasts. We may be a little more courageous than some others but that’s all. We’re all in this together,’ he said.

‘Extremism is just a way of being able to label an organisation that you don’t like that might encourage people to take power away from you. It’s nonsense.’

Gaby, 48, from Bristol – who also declined to give her full name, said she had been campaigning for environmental change since she was at school and said that XR had helped spur on a much-needed urgency to the movement. 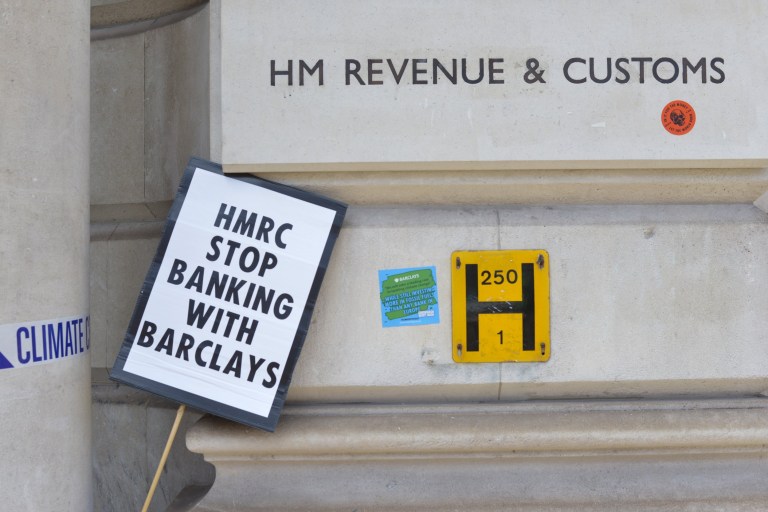 A placard left outside the HM Revenue and Customs on Whitehall about Barclays record of funding fossil fuel industries (Picture: SIPA USA/PA) 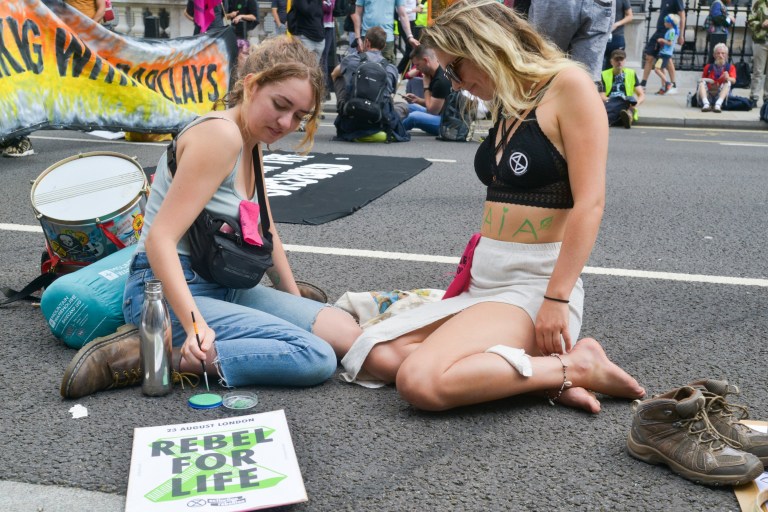 An activist having her body painted during the demonstration on Parliament Street, Westminster (Picture: SIPA USA) 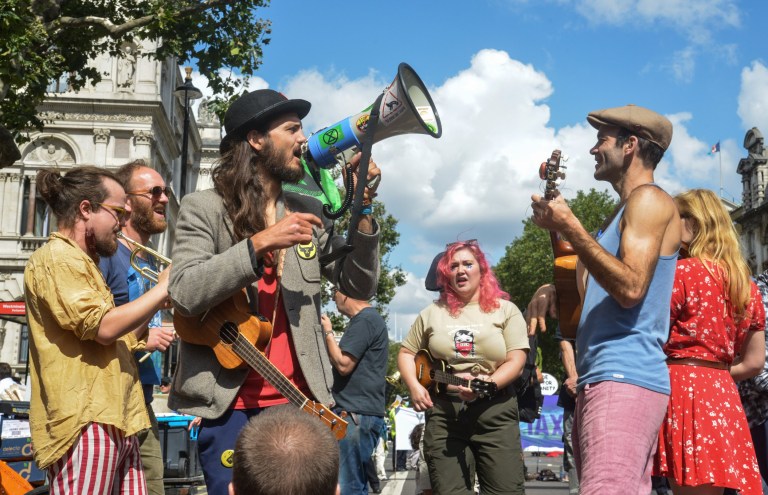 An activist speaking on a megaphone today (Picture: SIPA USA) 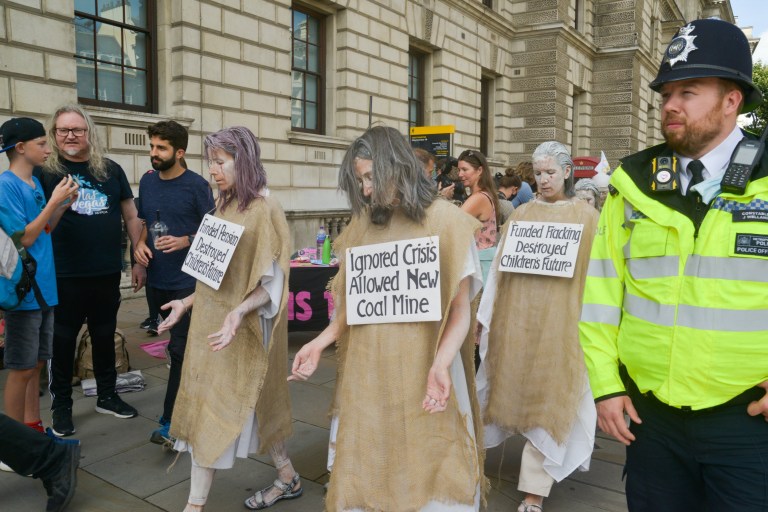 She said: ‘For years and years you do little bits and small things happen but the change we need now is so urgent that as many people need to come out on the streets to show that they don’t agree with the direction our earth is going in.’

She added that as a mother, her ‘heart bleeds’ for her sons’ futures, saying: ‘I’m a mother of two boys. One is grown up and another is almost out of school, and it’s really sad for me to know that in their heads are questions about whether it’s wise for them to have children and what their futures will look like.

‘My heart bleeds for them and all the people who are already facing the crap we have here.’

A silent protest where a group of some 20 demonstrators wearing burlap fabric and their bodies painted white also walked down from Trafalgar Square towards Whitehall.

The giant pink table erected in the middle of a central London street by protesters on Monday has been dismantled by police.

Segments of the four-metre structure were seen being carried off by men in hard hats and blue overalls today.

A cordon was put in place in Covent Garden, blocking off parts of the Long Acre junction with Upper St Martin’s Lane.

Activists set up the large pink structure, which featured the words ‘come to the table’, on Monday and it contained built-in lock-ons where protesters could attach themselves to make their removal difficult for police. It also had sleeping quarters and a stereo system.

Some demonstrators were pictured standing on top of the structure waving pink flares.

XR kicked off its Impossible Rebellion protests on Monday when demonstrators blocked roads in central London, including around Trafalgar Square, as they demanded the Government immediately end investment in fossil fuels that are driving climate change.

On Sunday, ahead of the official start of the action, protesters gathered at Guildhall in central London, with three scaling the entrance to the building.

A crowd of about 200 people sang and cheered as the protesters sprayed red paint over the walls of the building and unfurled a banner reading ‘co-liberation freedom together’.

The Met said a ‘significant’ operation would be in place for the protests over the bank holiday weekend but also acknowledged the activists’ ‘important cause’.

Erratic breathing to fidgeting – how to tell when someone is lying